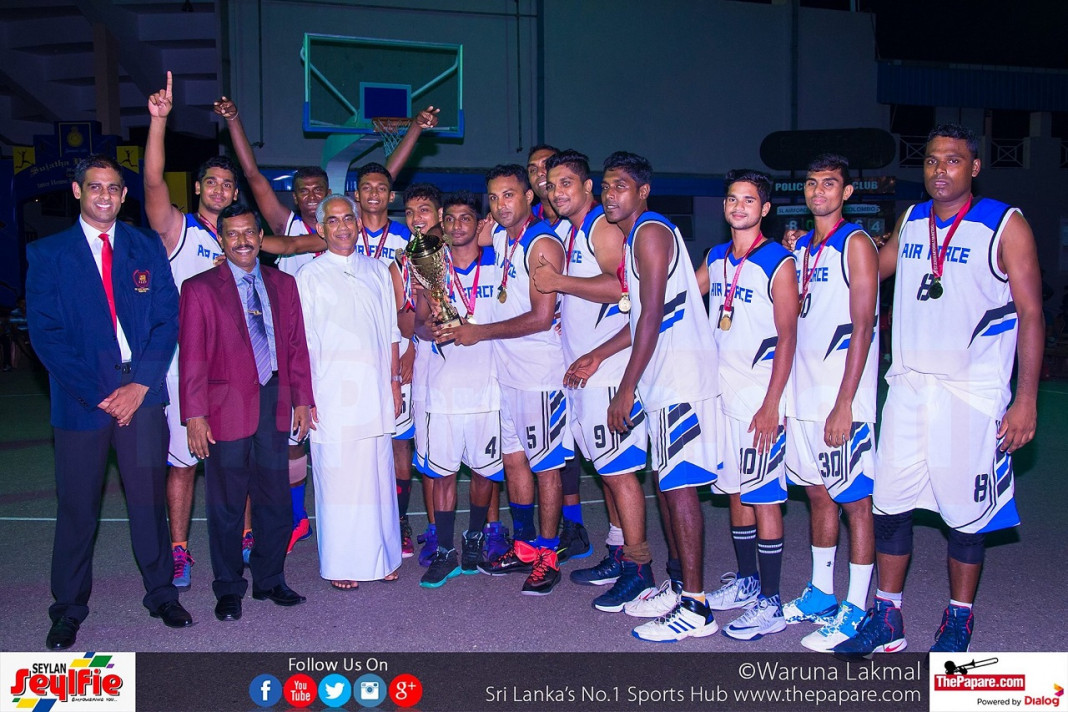 SL Air Force entered the finals of the 51st senior nationals downing the mighty Mercantile BA in a nail-biting semi-final 74-73 while Colombo BA beat their rivals Hambantota BA in the semi-final 52-49. The final was held on the 22nd of February 2017 at the Police Park courts. 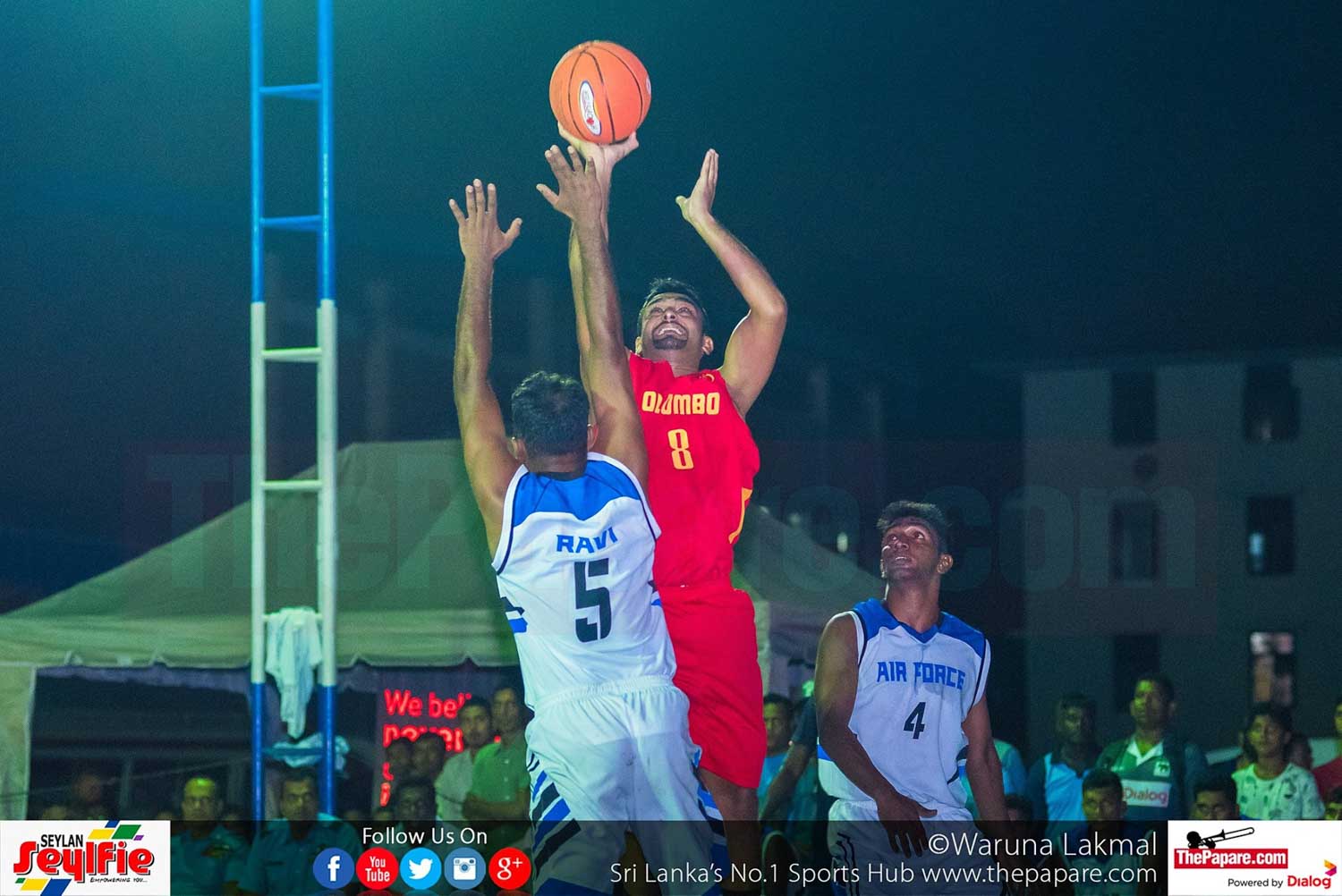 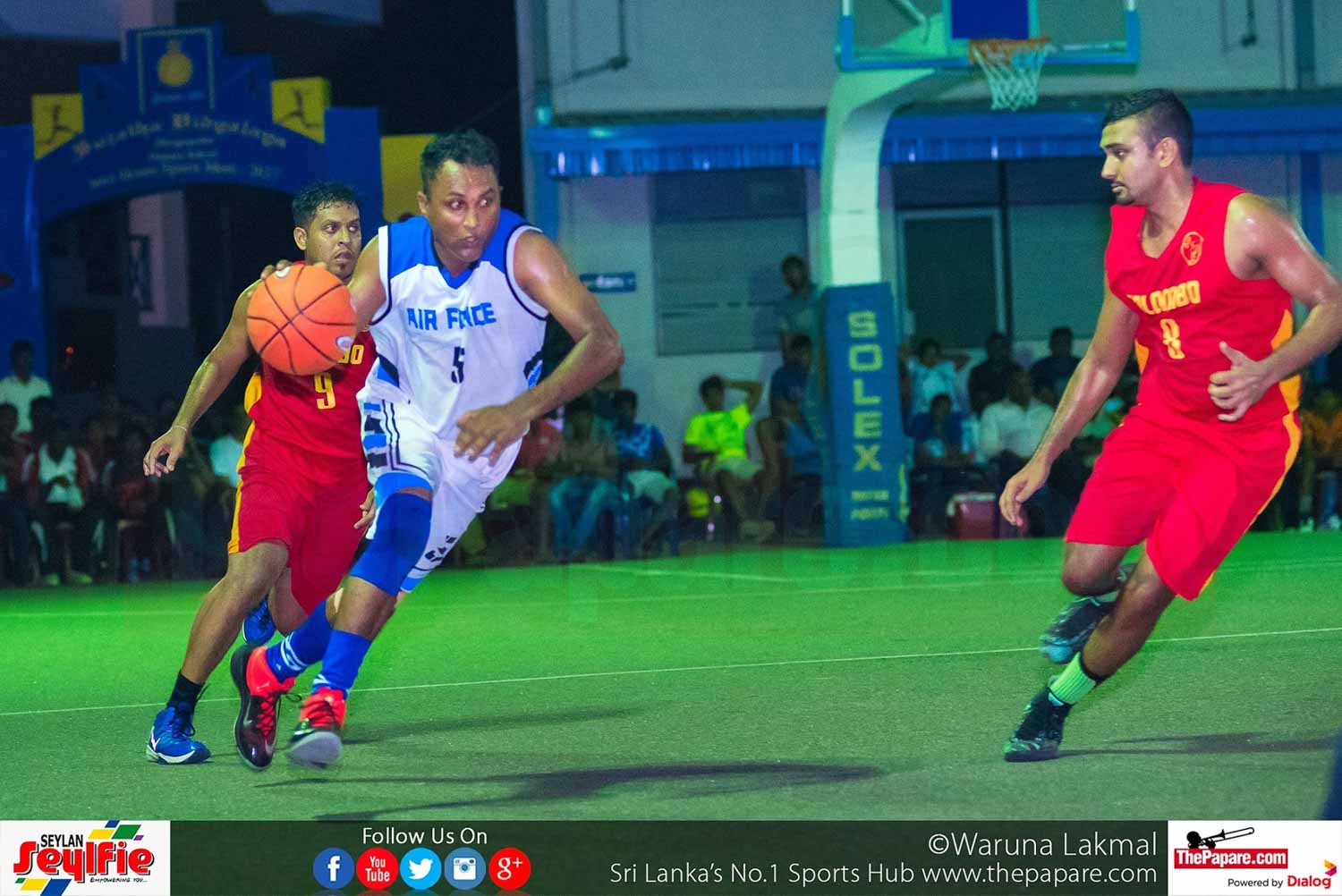 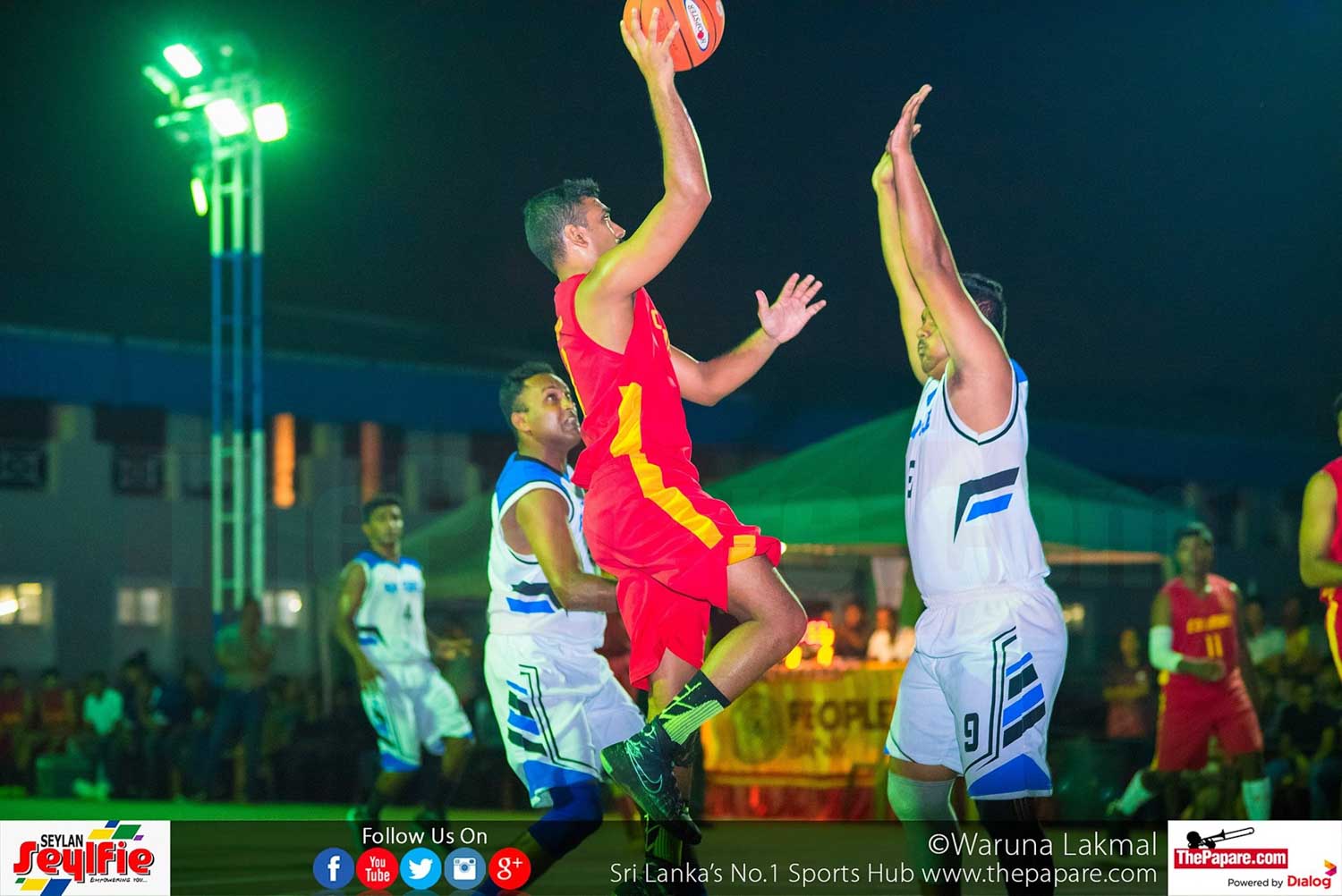 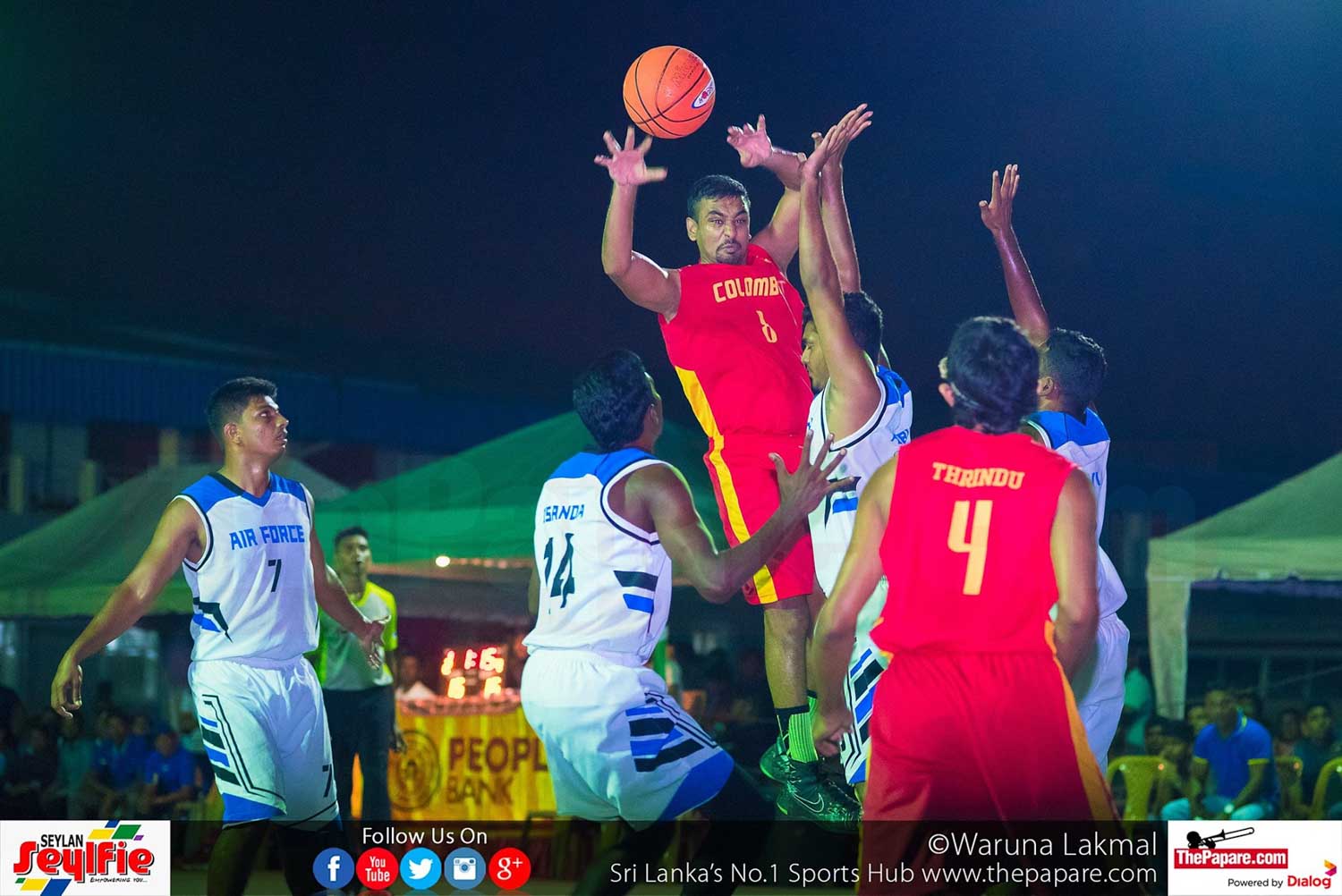 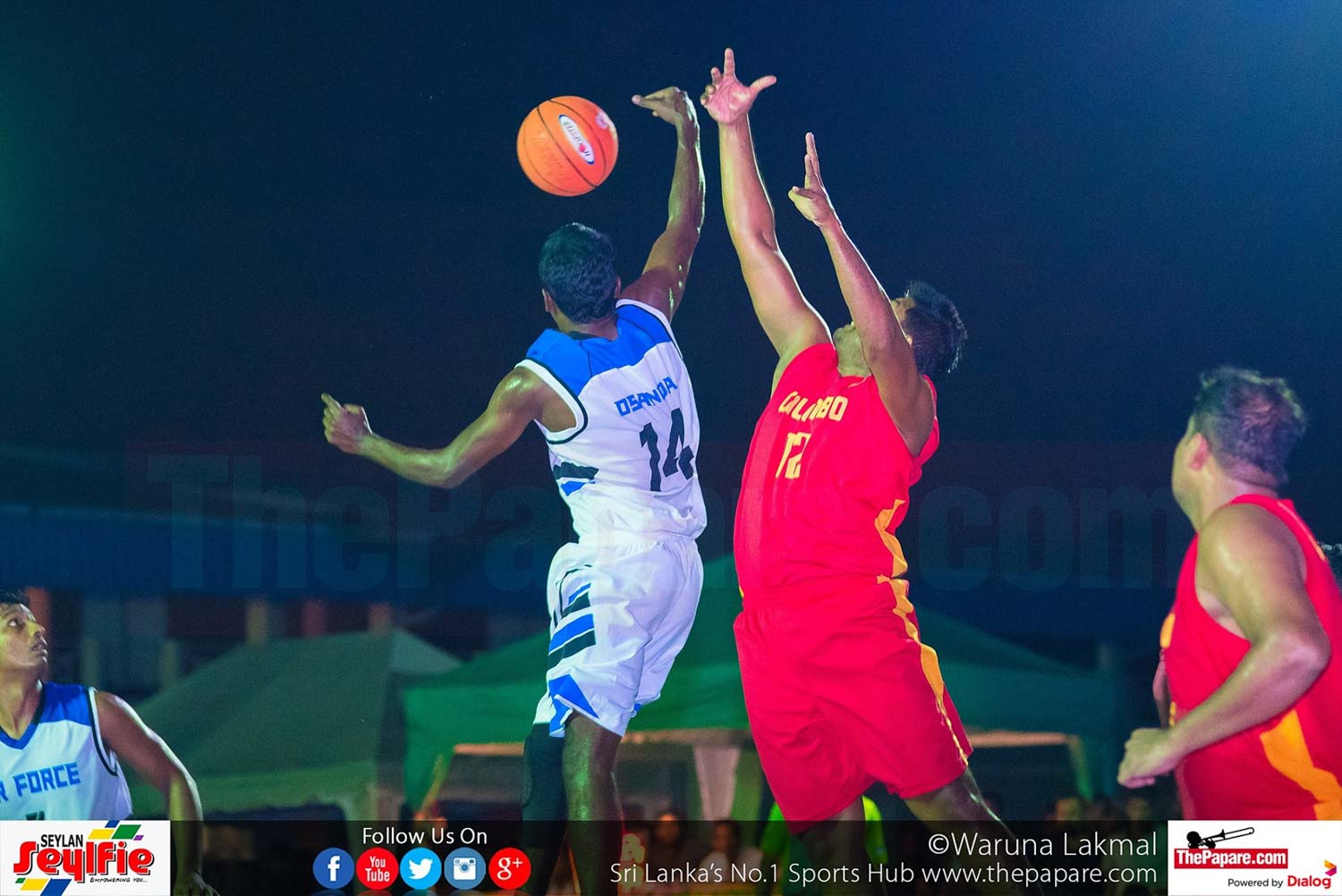 The game started up-tempo and both teams came firing on all cylinders right from the get-go. Antony Venito, who was the top point scorer for the Airmen at the semis, started from where he left off in the previous match and made a couple of 3 pointers to open his account. For Colombo BA, their star Center Sudesh Ahamed, who was playing despite multiple injuries made his intensions clear that he was ready to give it his everything in this game by scoring quick points and crashing hard at the offensive boards. Unfortunately, towards the latter period of the 1st quarter, Colombo BA lost their way a bit and committed too many turn overs  due to smothering defense played by SL Air Force. Their skipper Ravi Dodangoda too joined the party on offense, helping the Airmen take a 9 point lead. (25-16).

The SL Air Force youngsters Nishen Savindu and Pubudu Dilshan received a lot of minutes in the 2nd quarter and made good use of them. The 2nd passage of play was a much closer affair with both teams making several runs on the offensive end but SL Air Force managed to further extend the lead going into the breather (42-31).

Venito’s good form continued in the 3rd quarter as the shooting guard scored primarily via dribble penetration and finished at the rim. But Sudesh Ahamed, Lakshan Samarasinghe and captain Amila Rathnayake scored regularly, to keep Colombo in the hunt, going into the 4th quarter (58-45). 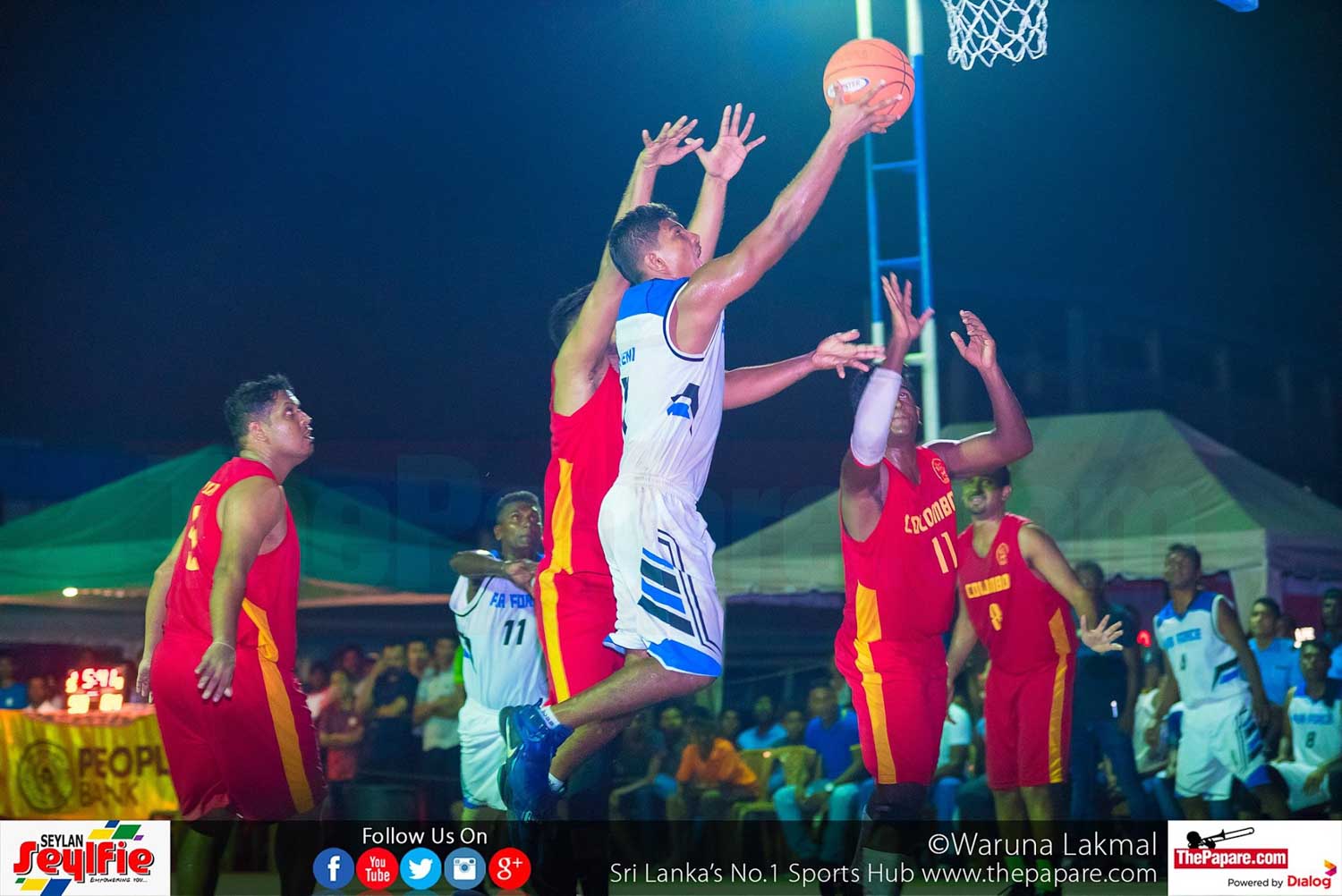 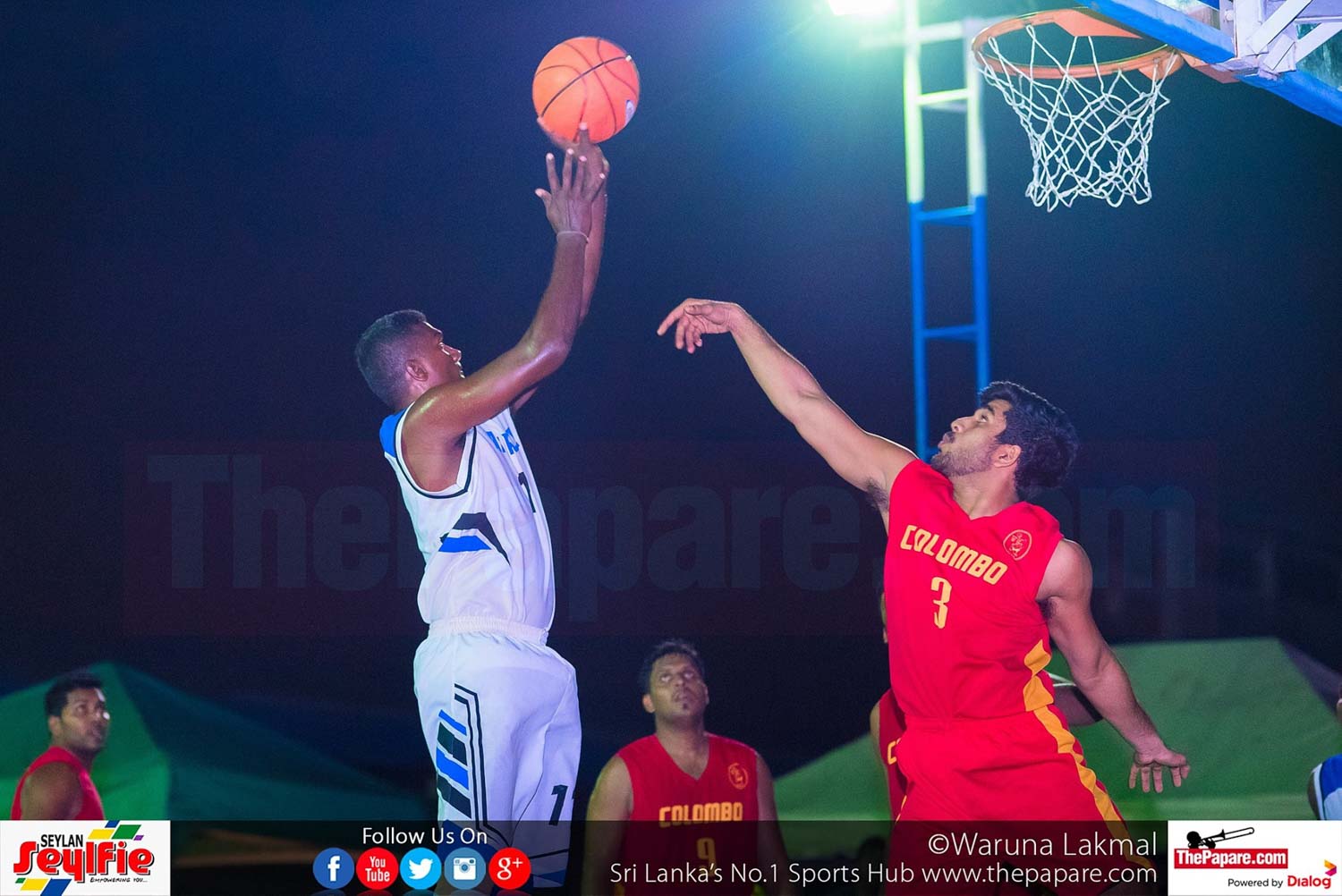 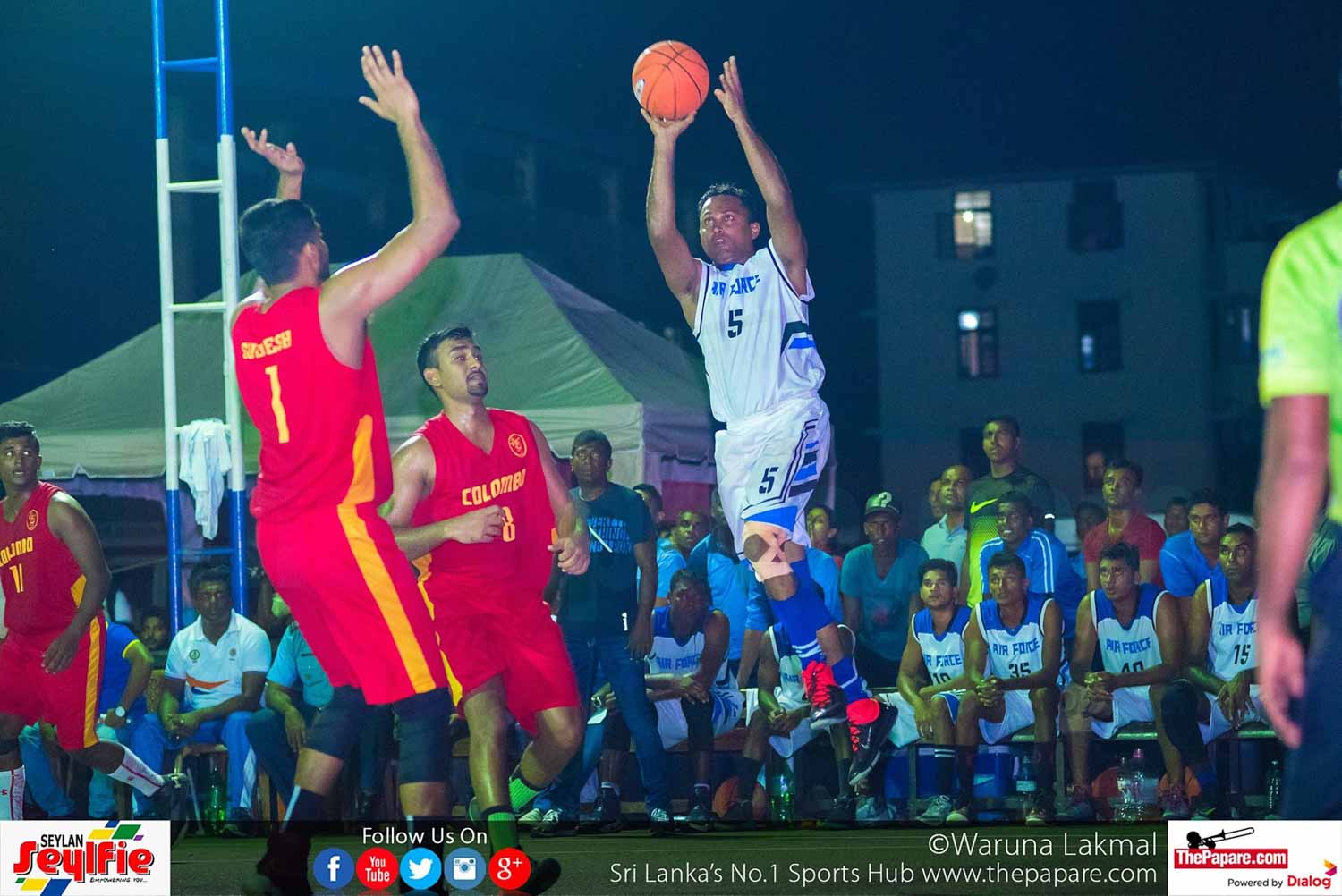 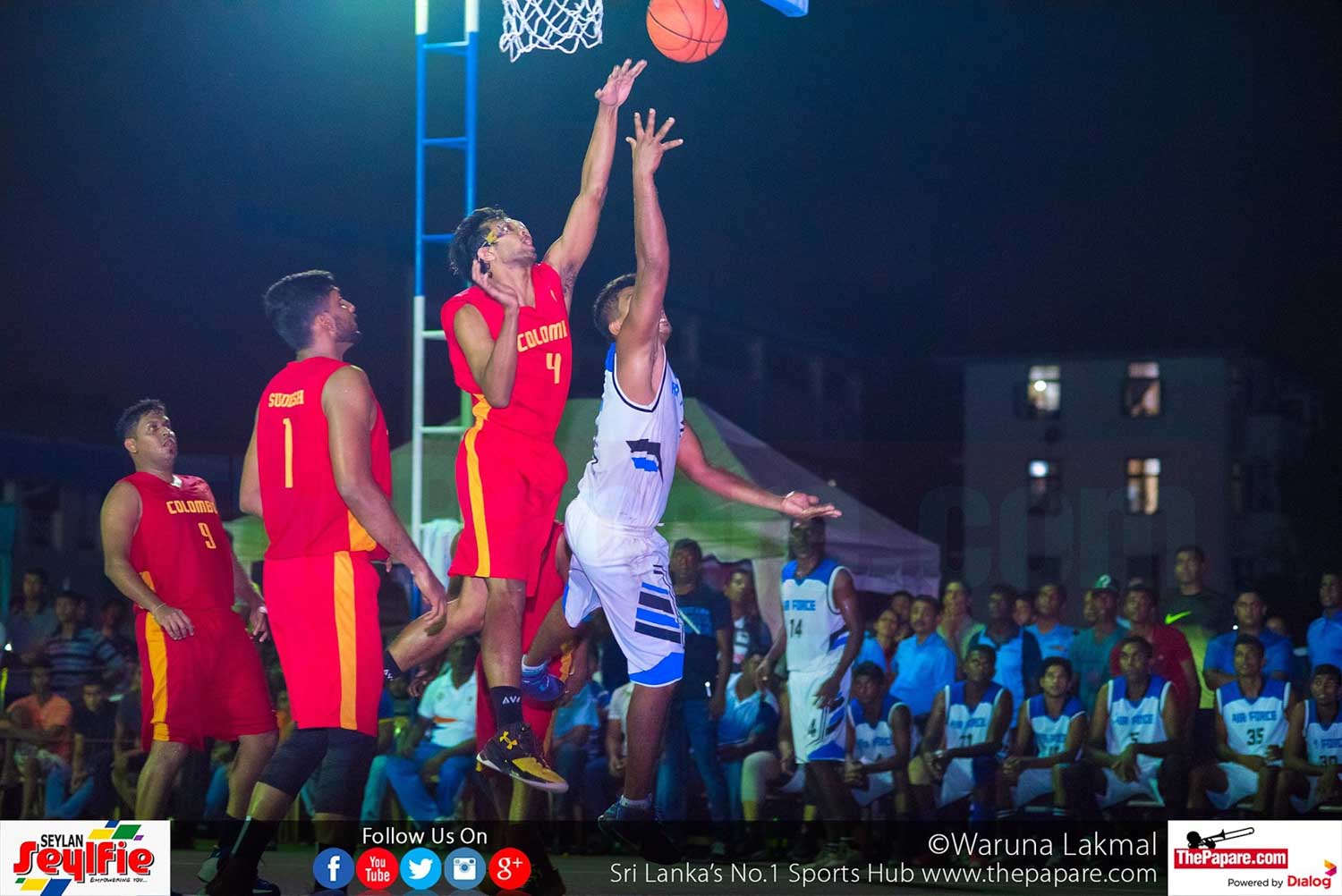 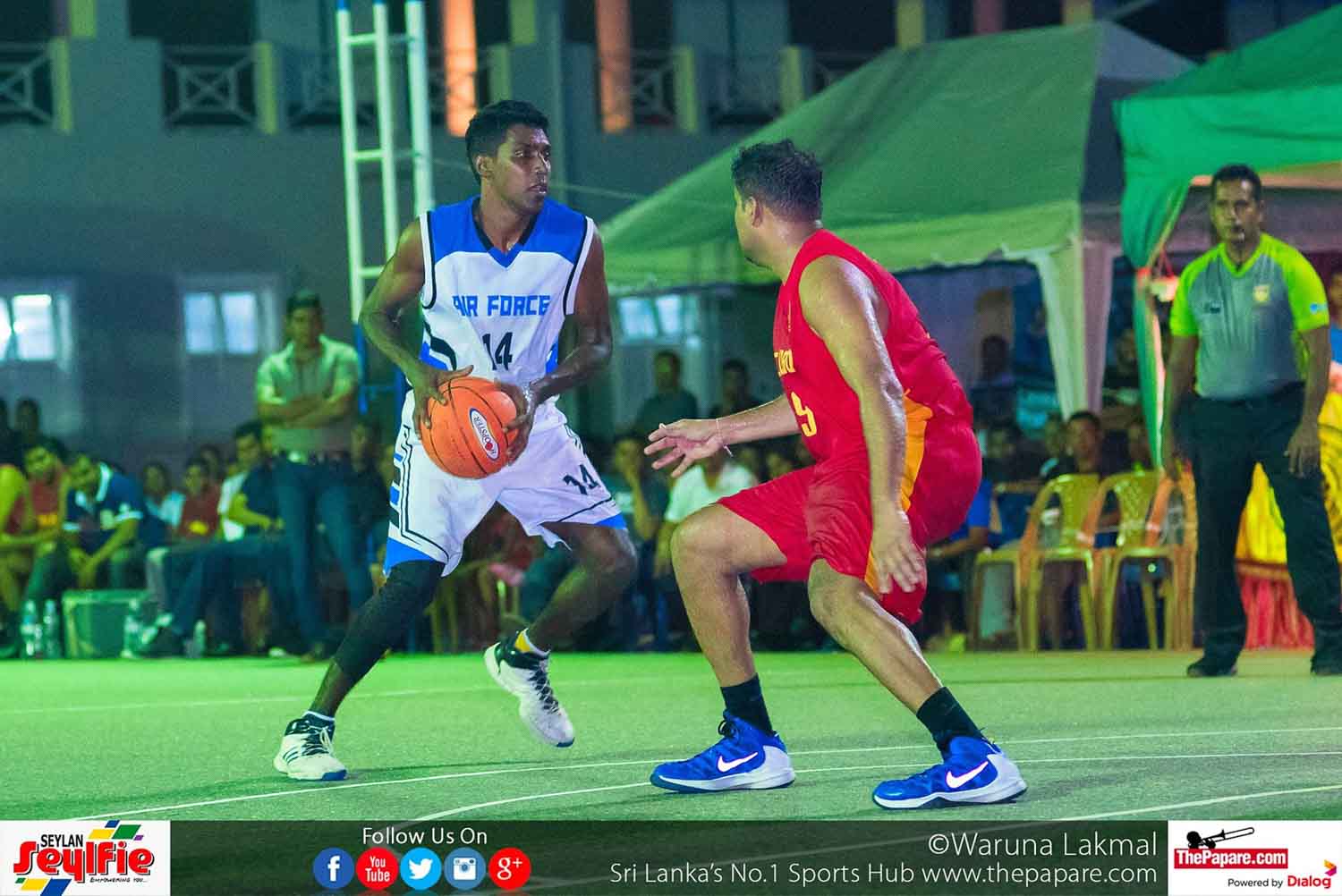 Colombo BA came within firing distance with 8:33 minutes remaining in the 3rd period making a 0-7 run and closing the deficit to 6 points (58-52). The experienced Ravi ended the drought and put SL Air Force back on track.  However Ravi Dodangoda was given a double technical foul for supposedly flopping and had to leave the game with 5 personal fouls. This could have been a big turning point in the game, but it was not to be as Venito continued to lead the offense and Osanda Umayanga, Gavi Cooray and Greshan Anthany chipped in with valuable contributions fending off their opposition. Sudesh Ahamed top scored for Colombo BA with a gritty 27 points despite his injuries. The game ended 80-64 at full time and SL Air Force recreated history, claiming the Senior nationals title back after a lapse of 31 years.

*SL Air Force last won the Senior nationals back in 1986.

“We worked really hard and put in a lot of effort and sacrifice at practice. We had a goal to reach, we worked towards it and achieved it. We have won the senior nationals after 30+ years. ”.

When asked if it is safe to say a new super power has emerged in the Sri Lanka basketball scene, he responded “No I wouldn’t say so just yet. I have a process towards achieving an even greater final outcome. This is only a short term goal that we have achieved. We will continue to strive to play better Basketball than we played today in the future”.

“We want to take this opportunity to thank the SL Air Force officers, Chairman of basketball, the rest of the management, my team and the whole of SL Air Force for everything they have done which contributed to this win. We have a team that works together and has a lot of bonding. We will continue to play together and go towards further championships in the up-coming tournaments”.

“Our team gave a good fight in this game. We came in prepared to win. It is very evident that SL Air Force has trained very hard for this tournament, and we should give credit to SL Air Force for their game play. Some of the Colombo BA players were representing Mercantile BA in this tournament. We also missed the services of 2 young and talented players as they were playing for SL Schools. Our team comprised of players from various clubs and we had some chemistry issues which resulted in a few bad passes and mishandling of pick and roll situations. We should have given a better fight. I think we relaxed in the 2nd quarter which helped SL Air Force play to their rhythm shooting 3 points and scoring via fast breaks. Looking forward, we should practice at least 1 month together as a team. Colombo BA came to the finals after quite a while so we are happy about this experience. Next time around we will rectify our errors and go for the, Gold”

“This tournament was a great opportunity for some of the young players in our squad. Tharindu Sankalpa, Kenneth Wickramasinghe, Shahen Silva all played really well. We also brought in 2 young lads Kapilan Sothilingam and Kisal Cooray who have a great future ahead. Both our experienced and young players helped us get this far in this tournament. One of our best players Sudesh Ahamed got injured during the semi-finals which was a big blow for the team. But he was up all night yesterday giving Ice treatment to his injury and managed to somehow play this tournament and become the highest scorer for us in this match! We lost quite a few players to other teams which was a bit disadvantageous for us. We would like to thank the management including Rimaz Hassan, Mafaz Mohideen for all their support. Rodney made sure our team was healthy. I would like to give a special thanks to Ajith Kuruppu who despite of having met with an accident and is now walking around with crutches, was still with us game in and game out. Last but not least to Coach Jagath Kulathunga who used to play for Colombo BC and understands player tendencies way better than anyone else. We could only train together as a team for a period of 1 ½ weeks and probably had 9 practice sessions as a unit. We should thank the coach for using all his experience in getting us this far. We will be back stronger “