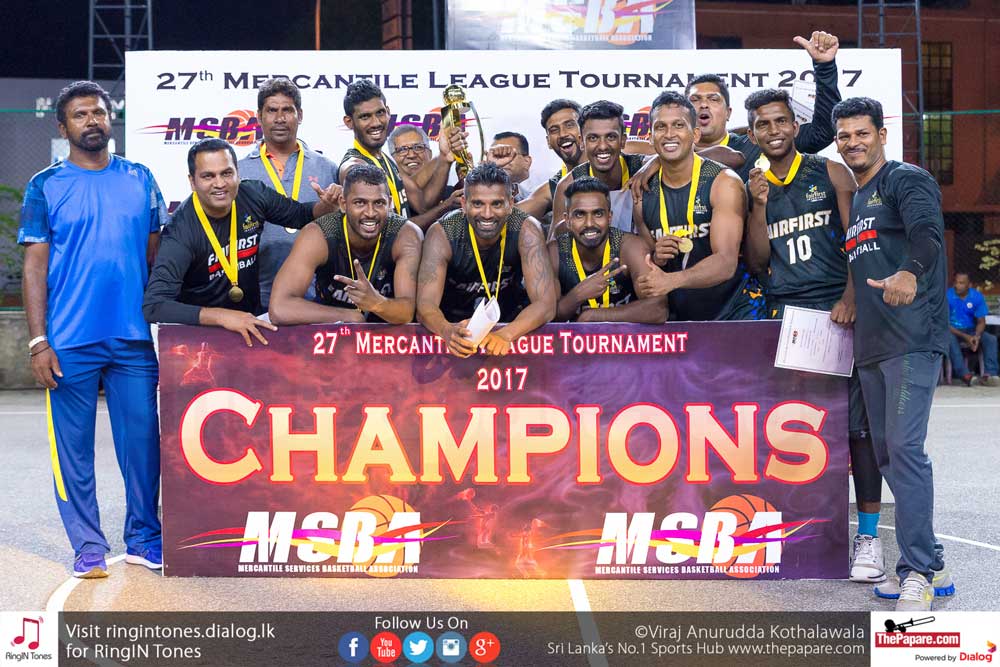 The most awaited Mercantile Basketball League ‘A’ division men’s match concluded last evening at the Henry Pedris Basketball court as fans filled in the park to see whether Commercial Credit could continue their winning streak. After a close and well-played game Commercial Credit was dethroned as the defending champions by FairFirst Insurance.

“Commercial Credit Coach: Even though we’re the defending champions we don’t have any pressure we’re going to focus on our strengths rather than trying to capitalize on their weaknesses and make sure that we play our game perfectly so that we can win.”

“FairFirst Coach: Our main plan is to focus on our defence and stop them from getting a high score that has been the prime focus of our players because we can catch up using our offensive plays and take the game.”

Commercial Credit took first possession of the ball but both teams found it difficult to score, each facing an extremely strong defences. Both teams had opted for a zone defence but Commercial Credit managed to get the first shot after a minute into the game. During the first quarter Commercial Credit dominated the post and collected all the rebounds and managed to take a slight lead although towards the latter part of the quarter. FairFirst turned the tables on them and went into the second quarter leading by 01.

FairFirst began to dominate the game getting in consecutive shots and increasing the deficit followed up with a strong defence near the post not allowing Commercial Credit to take a shot inside the D. Both teams were playing a very physical game as they fought hard for ball possessions. Commercial Credit double teamed the other team’s players when necessary to steal the ball and managed to catch up slightly towards the end of the half although they still trailed behind by 08.

During the third quarter Commercial Credit managed to catch up slightly although missing rebounds lost them a few chances where they could have turned the tables on FairFirst. Commercial Credit was hasty to add up fouls on their side which allowed FairFirst to maintain their lead through free throws although by the end of the quarter FairFirst had lost their lead as the point’s difference was only 02.

It was a make or break situation for both teams as this quarter was to decide the winner since the teams were neck to neck. FairFirst was playing an inside game taking shots from near the rim while Commercial Credit was playing an inside out game taking the ball in and dishing it out to their shooters who were positioned outside to take shots. FairFirst missed a few crucial layups that could have secured their victory as there was a minute to go and FairFirst only led by a single point. It was an incredibly tight game going right down the wire but FairFirst managed to get a lead of 3 points from free shots with mere seconds to go which was followed by a couple more points from free throws. Commercial Credit couldn’t keep control of their fouls and ended up losing the title they had been defending for 2 years.

Speaking to the FairFirst captain Shehan Udayanga, after the match he had this to say to ThePapare: “It was a very close game and a tough match and our team morale and determination was what got us through. All our hard work paid and we plan on continuing this winning streak.”