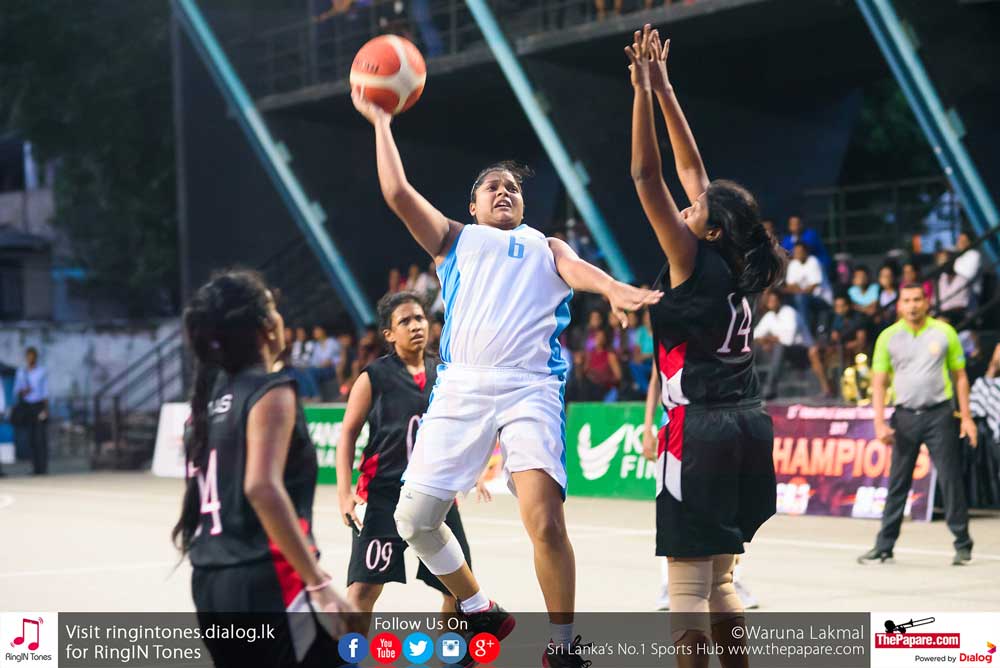 MAS Holdings Coach: “We need to block their shots from downtown and force them to drive in and block them under the basket and only allow a shot under pressure since their strong suit is shooting 3’s.”

NTB Captain: “We played the semi-finals with them and it was a tight game, we managed to catch up with them only in the final part of the game but hopefully this time we can maintain the lead from the start.”

NTB got first possession from the jump ball but it was MAS that scored first with a shot from downtown. Both teams were quick to move into a zone defense which was quite effective as the teams went neck to neck for the most part of the quarter. The MAS players made some good passes allowing them to penetrate the defense and get inside the D to secure baskets and take a slight lead during the first quarter.

As the teams moved on into the second quarter they struggled to shoot, making it a low scoring quarter. Nations Trust Bank moved into a full court press to stop MAS in their tracks and turned the tables on them as NTB took the lead going into lemons.

NTB came into the second half improving their rebounds and switched to attempting 3 pointers to create a gap between the two teams. The NTB players started to intercept passes more and began to dominate the game creating a deficit. MAS, on the other hand, lost possession of the ball due to bad passes and NTB took the first significant lead of the game.

MAS started off strong in the final 10 minutes of the game getting in a shot from downtown and moved on to a full court press. NTB lost 2 crucial players due to injuries making it even more difficult for them, given their already weak bench. During the final few minutes of the game, MAS managed to catch up and reduced the gap to 3 points from the free shots they received due to the high number of fouls by NTB. In a nail biting end, NTB managed to secure the win by 2 points.

Speaking to the coach of NTB after the match, he shared his thoughts with ThePapare.com: ” We had a tough game playing with only 4 players and no remaining bench. We had to use whatever we had and it was definitely a close call. Had we got more free shots in, it would have been easier, but we’re glad we were able to win.”