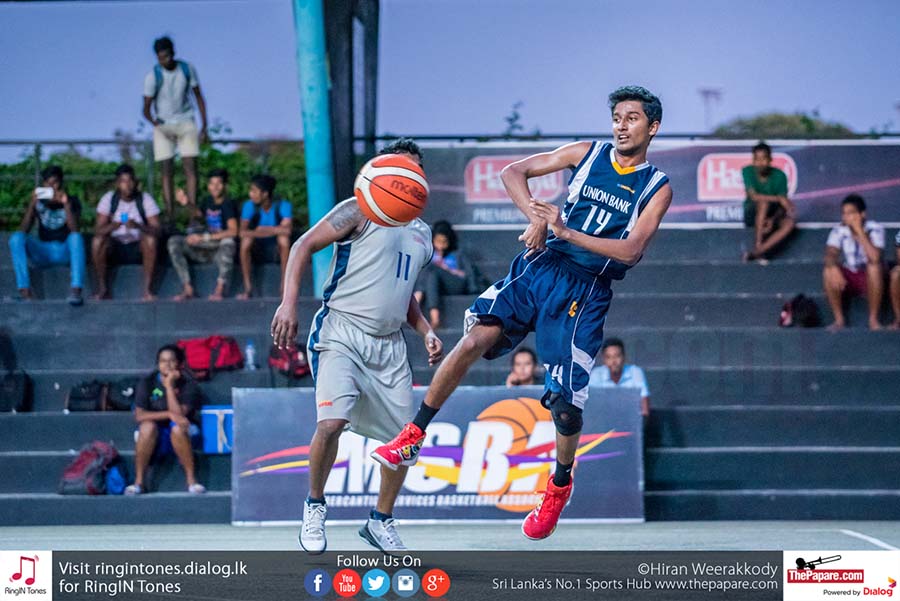 The 27th Edition of the Mercantile Basketball League will commence during the third week of June. ThePapare.com provides you the chance to vote for your favorite team…

Union Bank started off the game obtaining first possession of the ball but unfortunately lost it immediately. Both teams struggled to get the first basket. After the teams settled in it was the Union Bank team who scored first getting a shot from downtown. Throughout the game, Union Bank took their chances from around the perimeter and were successful with the majority of the attempts.

DPMC employed a 2:3 zone defense while Union Bank opted for a man to man defense instead. It was clear that the Union Bank team had the advantage having the younger and faster team on the court. Both teams did well at getting through the defense to drive in and score while relying heavily on fast breaks for a majority of their points. Although against all odds it was DPMC that dominated the half as Union Bank trailed behind going into lemons.

Union Bank had used the break to their advantage and regained their strength and came back with a tighter defense and turned the tables on DPMC. The Union Bank players capitalized on their speed advantage to beat the defense and score while DPMC lost the plot on their shooting as they struggled to make their shots count. Union Bank slowed down the game and maintained the deficit till time ran out to seal their victory.

The coach of the winning team had this to say to ThePapare.com: “We’ve lost 4 matches and only won 2 so that means we’re out but it was nice to finish off the last game with a win. We had a young team without much experience hopefully we can build on this and play the knockouts better.”

Commercial Credit obtained first possession of the ball and began to dominate from the first minute itself getting in a few consecutive shots and taking an early lead. Commercial Credit managed to get through the Sampath Bank defense by passing around and beating the defenders to increase the deficit. On the defensive side of things, Commercial Credit and Sampath Bank both opted for a man to man defense. Throughout the half, Commercial Credit had a well-rounded offensive side collecting the majority of rebounds with a high shot accuracy and they used their speed to their advantage. While Sampath, on the other hand, had trouble getting their shots in however towards the latter part of the half after a couple substitutions on the court Sampath settled into the game and started reducing the deficit and trailed behind by 8 going into lemons.

As the second half began Commercial Credit moved up to a full court press to stop Sampath in their tracks. During the half, Commercial Credit regained their dominance and increased the deficit while Sampath struggled to get past the Commercial Credit defense. However, in the final 3 minutes of the game, Sampath got their heads in the game and reduced the deficit to a mere 2 points. The pressure was high for both teams with the final 2 minutes deciding the results of the match. Although Sampath did well and came back into the game they made too many fouls in the final minute and lost their chances, giving Commercial Credit the opportunities at the line they needed to seal the win.

Speaking to the coach of the winning team, he said: “We’re happy about the win today but it wasn’t a very crucial match for us because we are already number one in the group and through to the semifinals. We hope that we will be able to continue the winning streak.”

The final match started off with Abans scoring through a free shot but as the game progressed Abans struggled to score points as Virtusa dominated the game entirely. It began to seem like a one sided affair as Abans struggled to score. During the second quarter Abans failed to get any shots in allowing Vistusa to take a massive lead of 24 points during the first half alone.

During the second half, Virtusa lost the plot in their shooting as well resulting in a low scoring third quarter. Both teams struggled to make their shots count with Virtusa only scoring 6 points during the quarter and Abans only scoring a mere 2 points. The final quarter, however, was when Abans finally got into the game dominating the quarter and scoring 13 points while Virtusa continued to miss their shots. Although Abans reduced the deficit in the final 10 minutes it wasn’t enough to make up for the last 3 quarters as Abans lost the match by 24 points.