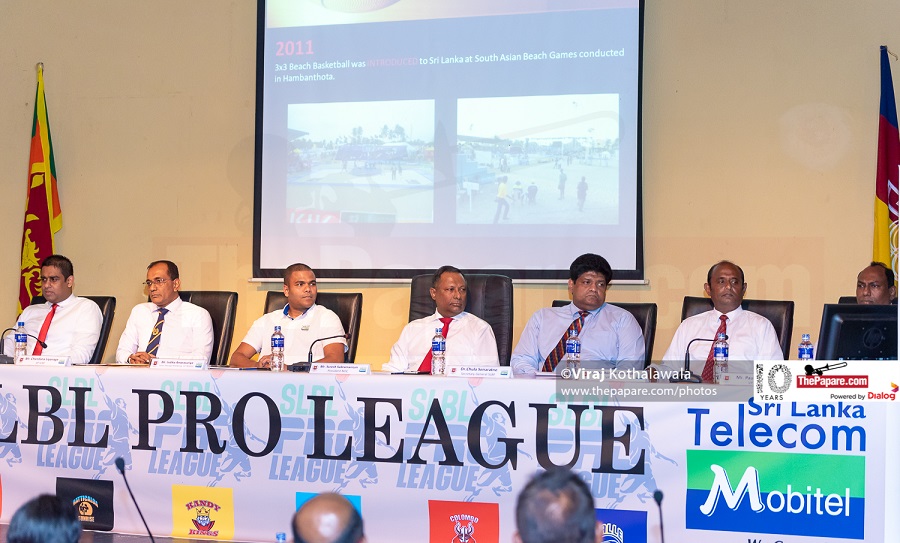 It’s been 100 years since the inception of basketball as a sport in Sri Lanka. In this century of existence, the sport has had its fair share of ups and downs. However, the recent past has been an era where the sport recommenced it’s revitalization process.

Looking at the fancy 3×3 events that are being organized by the local governing body (SLBF) and private event companies, one would tend to ask, is the traditional outfit of the sport dead and gone? Well, Sri Lanka Basketball Federation, has replied the question in the best possible manner.

Adding both flare and professionalism to the sport in the country, SLBF, today (2nd of April 2019), launched the first edition of the Sri Lanka Basketball League (SLBL), a professional league for all the top level players in the domestic circuit.

Vice President of Sri Lanka Basketball Federation Chandana Liyanage, speaking at the event said, “This is a day that we were dreaming of. Basketball was introduced 100 years ago and we haven`t had a professional league. Today the baby was born”

Mr. Liyanage announcing the six franchise teams of the SLBL at the event said, “We are going to have six teams sponsored by 06 franchise sponsors. The teams are Jaffna Crabs, Batticaloa Sunrise, Colombo Warriors, Galle Express, Kandy Kings and Gampaha Jets”.

For the first time in the history of the sport, all the top-tier players of the domestic circle will be nudged with professionalism in the sport.

Mr. Liyanage explaining how professionalism will be instilled in the tournament said, “The six teams will have 10 players each together with 12 coaches. The players will be auctioned at the auction night by the franchise sponsors. For the first time players will be paid at their value together with the coaches of the industry”.

The tournament will operate with the six franchise playing a group stage in the round robin format. The preliminary stage will consist of 30 matches played on a home and away basis. Upon the conclusion of the initial rounds, the four top teams will qualify for the semi-finals which will be played as a best of three matches, between each franchise.

The two franchise who will qualify for the league finals, will play another three matches between them to be crowned as the champions of the SLBL.

Thus, a total of 40 matches will be played within a span of 06 consecutive weeks.

A prize money of 01 Million Rupees will be awarded to the winner while there will be cash prizes for the runners-up team as well.

The first edition of the tournament is sponsored by Sri Lanka Telecom – Mobitel, coming on board as the Platinum Sponsor while ThePapare.com – Sri Lanka #1 Sports Hub, will join hands as the Digital Media Partner. ABC Media will partner as the TV/Radio Partner while Lanka Hospitals will be the Health Care Partner for the event.

ThePapare.com as the Digital Media Partner will cover all the matches with detailed match reports and analysis, while the best moments of the SLBL will be captured by our photographers. The SLBL will also be live streamed on ThePapare.com.