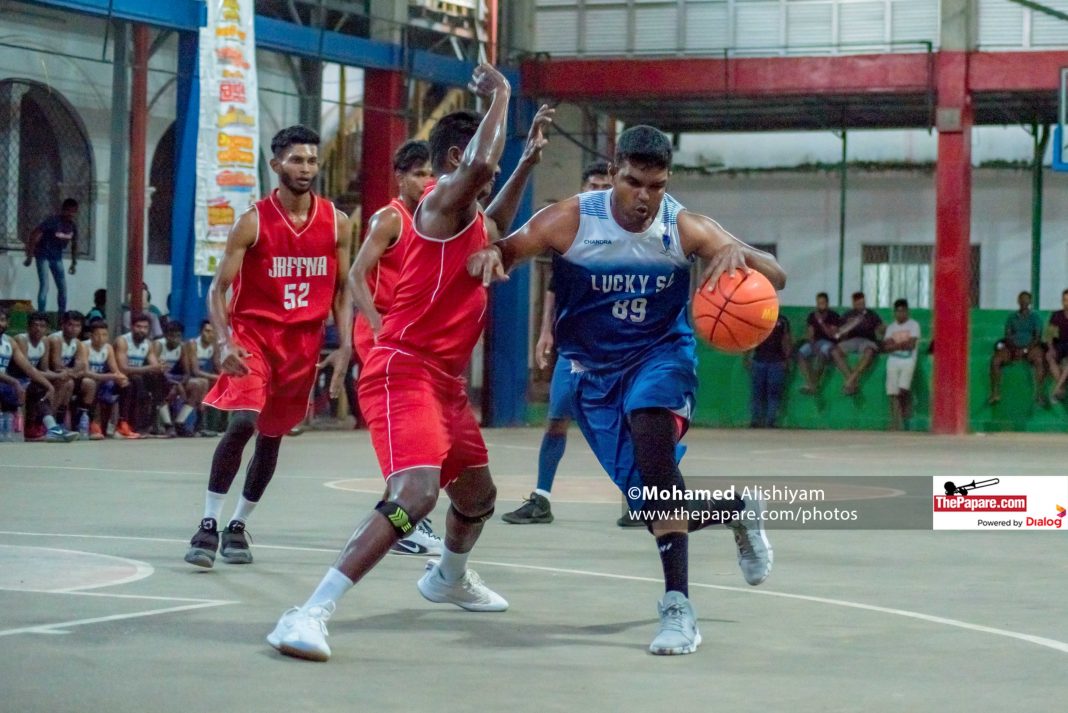 The second level matches of the 52nd Senior Nationals tipped-off in Batticaloa today (24th January), at multiple venues. Five matches were played on the maiden day, which included matches from the women`s and men`s categories.

The first two matches for the day were played at Maini Technical College Basketball Court Premises between SL Universities (SLU) vs. Anuradhapura District Men`s Team (ADB). The match went down to the wire, as the combined university lads grabbed the victory by a single point at 47-46.

SLU topped the maiden quarter of the match with a comfortable 08-point lead – scores read 18-10. ADB went on to score 11 points in the second quarter but conceded 10 points, which put the SLU lads ahead at lemons.

It was the second half of the match which turned the tables around for the A`pura lads. They went on to score 13 points in both the quarters which cut down the deficit to a single digit. SLU in reply added 10 and 09 points for the third and fourth quarters respectively. However, the early leakage of points haunted them at the final whistle as the lads from the North Central Province were short of a singular basket.

The second match was worked off between Kandy District BC (KDBC) vs. Rathnapura District BC (RDBC) women`s teams. It was a walk in the park for the hill-country lasses as they secured a 21-point win at full time – scores read 42-21.

The three remaining matches for the day were played at the famous Herbert Stadium in St. Michael’s College – Batticaloa. The Northern and the Eastern power-houses of basketball, Jaffna District BC (JDBC) took on Batticaloa District BC (BDBC).

Both sides were equally matched up in all departments which made it a tight contest to cross the winning line. BDBC topped the first quarter scoring 13 points in reply to the 12 points of JDBC. The visitors stepping back into the game, scored 18 points in the second quarter while conceding only 14.

Even though the Jaffna lads led the match at lemons, 30-27, BDBC got back into the driving seat at the end of the third quarter, leading the match by a couple of points – 40-42.

However, JDBC went on to score a game-high of 24 points in the final quarter, which handed them over a win of 03 points at the final whistle. Batticaloa lads only managed to add 19 points. Full-time scores read 61-64.

The fourth match for the day was played between SL Universities (SLU) vs. Polonaruwa District BC (PDBC) women`s teams. It was another contented win for SLU lasses as the final scores read 50-02.

The fifth and the final match for the day was played between, Kandy District BC (KDBC) vs. Galle District BC (GDBC) men`s teams. The match concluded with Kandy lads securing a win of 13 points off as the final scores read, 64-77.

Tomorrow (25th January), will be the second day of the tournament and the final day of the preliminary stage. Stay logged on ThePapare.com for Photos, Videos, Match Reports and Updates on the tournament.