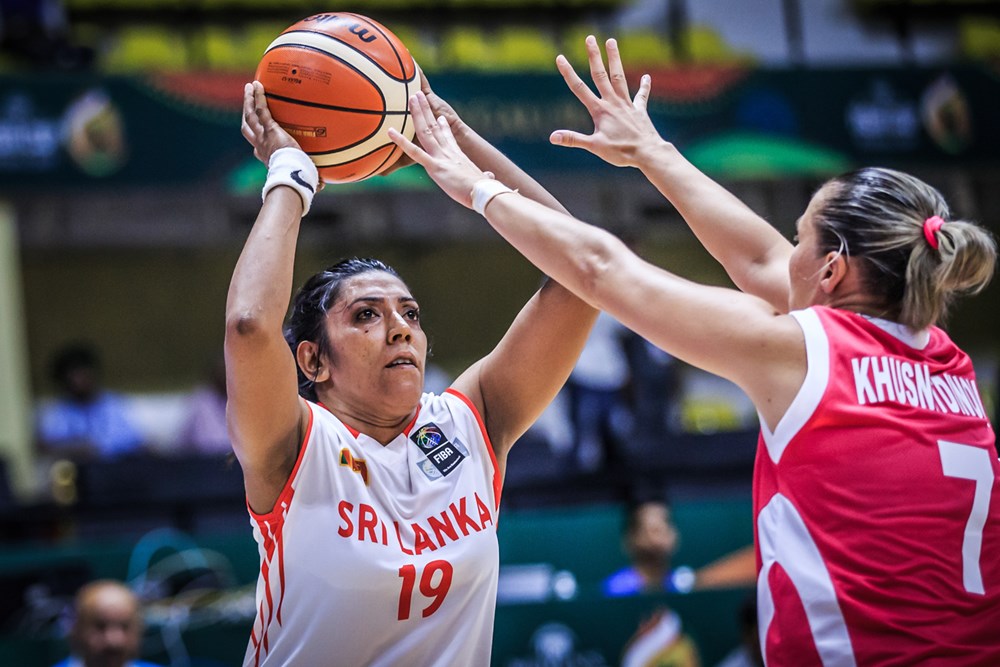 Sri Lanka having lost their two group matches and quarter-final against Lebanon, played against Fiji, a classification game for class 5-8. Both teams were evenly poised in terms of talent, the only thing Sri Lanka had more than Fiji was experience.

Sri Lanka took on Lebanon in the second quarter-final game of the 27th FIBA Asia Championships 2017.

Sri Lanka lost the jump ball but Fiji failed to gain full advantage of the jump-ball won. Both teams had equal chances at their first shoot at the hoop; both failed. Later in the fourth minute Fiji was awarded two FT`s which they failed to convert. After Sri Lanka missed another three shots at the hoop, it was Fiji who drew first blood from outside the perimeter, 3-0. Fiji went on for a six-zero run until Premila Fernando go the party started for Sri Lanka swishing the nets from the three-point arc. Sri Lanka attempted sixteen three-pointers out of which three bought points. Only a couple of two pointers out of the twelve three-pointers were converted by Sri Lanka.

Throughout the tournament it was the second quarter that dismantled Sri Lanka from the game but it was a different case this time. Sri Lanka pulling their act together went on to square the game twenty all as Niroshini Paiva connected from outside the arc. Out of the fifteen shots attempted from outside the arc Sri Lanka converted three and from thirteen two pointers, three shots ticked the scorecard. Fiji added eight points into the quarter while Sri Lanka replied with fifteen. Both teams were evenly poised in rebounds, it was the shooting and the defence that made the difference. Sri Lanka being able to keep up the momentum, for the first time in the tournament led the match by four points into lemons.

Even though Sri Lanka led the game at half time, Fiji revamped themselves to swap the lead back on. Benika Thalagala penetrated in and scored first for Sri Lanka. Both teams stepped out to the challenge keeping the scoring momentum, grabbing rebounds and ticking the scoreboard. Sri Lanka went on to add nineteen points while Fiji replied back with twenty-three. Going into the final thirty seconds of the quarter, Fiji swished the nets with a mid-range jumper to square the game 45-45. Another layup with five seconds remaining made Fiji lead the game by two points, 47-45. Going into the final possession of the quarter, Sri Lanka`s experienced point guard Premila Fernando dished out a buzzer beater to equal the game 47 all at the end of the quarter.

The final six hundred seconds was all to fight for. Benika Thalgala took charge first up, scoring a couple and getting the lead back on Sri Lanka but Fiji equalized the next possession, 49 all. The lead kept on swinging in both directions as the teams led the game equally during the final quarter. Sri Lanka led the game by a couple of minutes with two minutes remaining on the clock Sulochana Iddamalgoda converted both her shots from the FT line. Yet Fiji managed to square things off in style once again in the next possession. Fiji led the game by a couple of points but the three pointer by Imesha Tathsarani got the lead back on Sri Lanka, 61-60 with one minute on the clock. Fiji dished out another layup in the next possession to swap the lead back to them with seconds on the clock, 61-62. Nadeeshani Silva gave a foul away, where Fiji capitalized and added another couple of points of FTs. Another layup gave a Fijians a comfortable lead of four points with five seconds on the clock, 61-65. Imesha Thathsarani took buzzer beater which did tick the scoreboard for three points, but it wasn’t enough to overtake the four point lead.