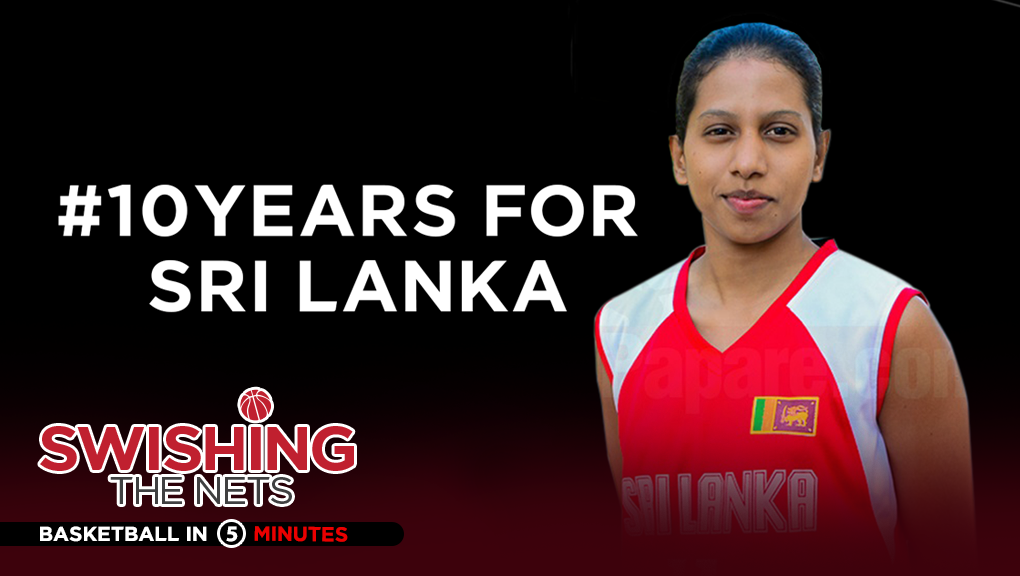 Anjalee Ekanayake, was crowned MVP in the women`s final of the 52nd Senior Nationals 2018. Her team, Mercantile Services Basketball Association won the title for the second consecutive time. Anjaleee, also represents Sri Lanka in both 5on5 and 3×3 formats for over a decade. This week on Swishing the Nets – Basketball in 05 Minutes, this is her story.

Q: Tell us about your introduction to the sport?

Well my first sport was swimming but I had to put a stop to it. We had to travel to Sugathadasa Stadium from school, so my parents did not approve of it. So, I started basketball in 1998, when I was in grade four.

Our school, Good Shepherd Convent, Kotahena, was famous for the sport. On the other hand, since the court was inside school premises, my parents did approve of basketball.

I started my career under Coach Panduka Ranasighe. We would have practices in the morning and evening both. When tournaments were tight, weekends were also dedicated for practices.

Q: What`s your secret in being one of the fastest basketball players in the country?

Q: Who supported you?

Well, it was my mother who was behind me in basketball. My father always believed in perfecting the academics. I have a twin brother who excelled in academics, so I am sure you understand how the situation at home turned out to be.

My mother however supported me entirely, defended me when my father thought I was spending a lot of time playing basketball. Eventually I went on to excel in both. In addition to my mother, my two elder sisters supported me, still they come to watch my matches.

Q: How do you manage your time? In-between, studies, work, family and basketball?

Back in the day when it was studies and basketball, studying was my pass to play basketball. Since my father believed in excelling in academics, more studying helped me to play more basketball. Our coaches too assisted by directing us for extra classes and helping us.

Presently, my bank supports me immensely. When it comes to national tours and tournaments, the bank excuses me via duty leave and allows me to play for those tournaments. That makes it easy to create a balance between the work and the sport.

Q: What was it like to represent Sri Lanka internationally?

In 2015, I was adjudged the top performer and scorer in almost every match we played at Asian Basketball Championship. For that performance I received the Presidential Award. In 2016, we went on to become the champions of the South Asian Region, winning the SABA tournament for the first time in the history of the women`s category in the sport.

Q: Who is role model in basketball?

Q: Unforgettable moment in your career?

Well, in 2016 when we played the finals at the SABA tournament in Nepal, it was an amazing feeling. I will never forget that atmosphere, walking into the stadium with the support of the Sri Lankan`s living in Nepal, our national flag on the either sides, that moment will always be in my heart.

Q: Worst experience in your career?

In 2006, during my first overseas tour, in the qualification match, we had 08 seconds remaining on the clock to decide the match and I committed a mistake which denied us the qualification. It was due to the lack of my experience, but that is one of those worst experiences in my career.

Q: Now you are an experienced player, how do you avoid that type of situations?

Well I have learnt a lot, I now try to create plays and try to involve everyone in the team to score during those situations. I am player who depends a lot with the confidence of the coach on me, so if that is there, then I am un-stoppable. Having said that, I now focus a lot on team-plays.

Q: Where do you think Sri Lanka Basketball stands?

We only get to practice 2-3 weeks before a tournament and that also at an outdoor facility. Everybody is waiting until a medal is won to act and improve the facilities. I would suggest to try and do this before winning a medal and see the results our athletes can produce.

I would have progressed further academically. I love music and dancing. So perhaps in that area. In terms of a sport, I love cricket, but we don`t have cricket in our school. I would have pursued athletics.

Q: Plans for the future?

My focus is currently on the up-coming Asia and SABA Championships. Additionally, to that I am looking forward for more 3×3 basketball and then focus on my banking career.

I would also like to thank ThePapare.com for all the coverage they provide to us, it helps to popularize the sport and to uplift the game of basketball in Sri Lanka.

ThePapare.com wishes the very best to Anjalee Ekanayake in her future endeavors!