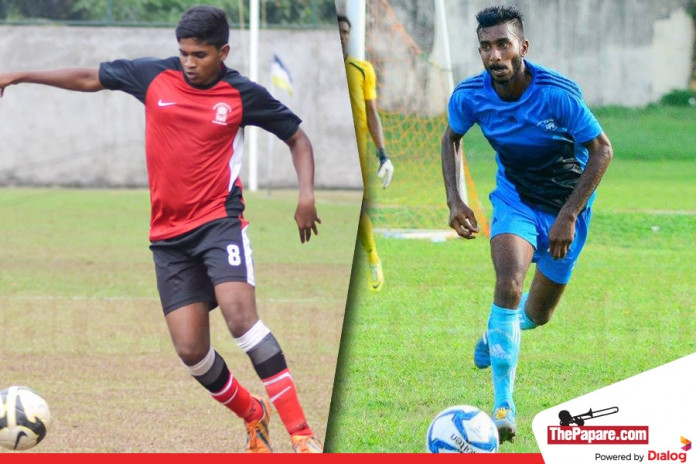 Second half strike from Nadeesha was good enough to level out Tharanga Bandara’s early strike as Old Mazenodians played out a competitive draw against an evenly matched SLTB at De Mazenod College grounds in the 2016 Premier League Division I game.

SLTB kicked off on a gloomy afternoon as the game was played on a wet outfield. Old Mazenodians fielded out an attacking 4-4-2 formation while SLTB played a more defensive minded 4-2-3-1 formation.

SLTB found their footing as the game progressed but a 25th minute strike from Old Mazenodian forward Tharanga Bandara put a premature end to their progress.

A pin point free kick from Abdul Rahuman found the head of Tharanga Bandara as he finished clinically to give the host the lead in the game.

The hosts, Old Mazenodians dominated proceeding as winger Abdul Rahuman and forward Gunasekara missed golden opportunities to extend their lead in the game.

Old Mazenodians kicked off the second half as the pitch started to deteriorate following bad weather in the early hours of the day.

SLTB came out with a point to prove and in the 50th minute winger N.P.C.Nadeesha made a telling dribble, cut inside and took the shot but was unfortunate as the ball bounced away off the post.

Following the equalizer the game took a nasty turn as SLTB goalkeeper was sent off for sliding in at the edge of the box on Old Mazenodian forward who got in behind of the SLTB defense.

The resulting free kick was stuck high over the goal by goal scorer Tharanga Bandara for Old Mazenodians.

The hosts turned the pressure on as they played with an extra man. Tharanga Bandara was ever so close to doubling his and his team’s score, but substitute goalie had other ideas as he intervened and put a stop to the move as he kept his team in the game.

Bandara, hero for the host turned villain as he too was sent off with two yellow cards within three minutes.

SLTB goal scorer Nadeesha had a golden opportunity to put his name in the headlines, but failed to finish as he cut inside to his left only to make a wayward shot as the game drew to a competitive draw.