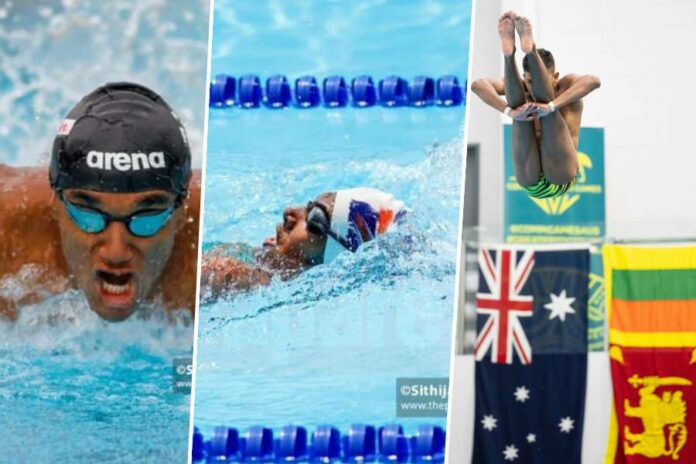 The Sri Lankan Aquatics Team, which includes two swimmers and one diver, is ready to showcase their talent at the Commonwealth Games – Birmingham 2022.

Akalanka Peiris and Ganga Senevirathne, the fastest male and female Lankan swimmers respectively, with the highest FINA points, will make up the swim team.

The current National Record Holder of the 50m Butterfly, 50m and 100m Backstroke events, Akalanka Peiris will take part in 50m Butterfly and 50m Backstroke on the 29th of July and the 31st of July respectively.

The old Peterite is currently swimming for Sri Lanka Army as a Brevet Officer. This is the second consecutive time Peiris will be representing his motherland at the Commonwealth Games.

The talented schoolgirl Ganga Senevirathne of Visakha Vidyalaya will take part in 100m and 200m Backstroke on the 30th of July and 1st of August respectively. Ganga currently trains at Killer Whale Aquatics under Coach Manoj Abeysinghe.

This is her first-time representing Sri Lanka at the Commonwealth Games. Additionally, she has shown remarkable performances at many other international events winning 3 Silvers and a Bronze at the South Asian Games 2019 and taking the Lion flag to the FINA Junior World Championships 2019, FINA SC World Championships 2021 and the World School Games 2019.

According to national swimming team coach Shehaan Dias, semi-finals are possible for both Akalanka and Ganga in all their events.

Diver Dulanjan Fernando who is currently based in Australia will take wing on the 30th of July to Birmingham 2022 to showcase his spectacular turns, twists, and somersaults. He will commence his training in Birmingham on the 31st of July and will take part in 1m springboard and 3m springboard events on the 4th of August and 6th of August respectively.

An old Royalist, Fernando moved to Australia for his advanced training and higher studies at Deakin University in 2020 and is currently training at MelAm Diving Club under Coach Monica Fly.

Mahinda Liyanage will take on duties as the Team Leader whilst Shehaan Dias will be the Swimming Coach.