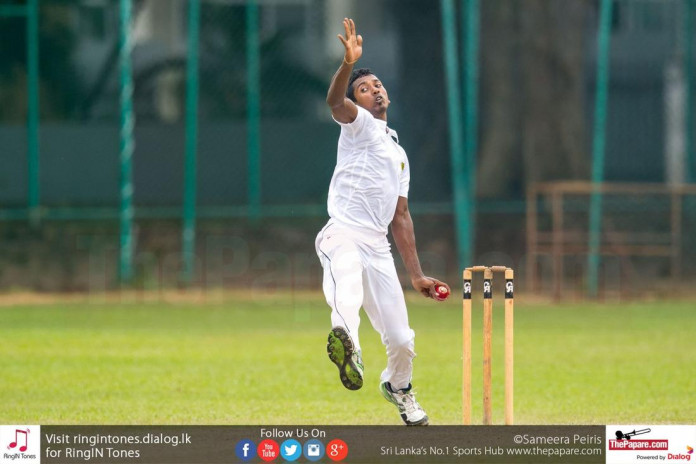 After posting 353 runs in the first-innings, Sri Lanka ‘A’ bowled out the hosts’ to only 205 and currently lead the game by 172 runs with 10 wickets and 2 days remaining.

The Islanders commenced day two on 273 for 6 with the centurion, Roshen Silva on 103 and Prabhath Jayasuriya on 30 but both the batsmen fell in the first hour as Paul Coughlin and Gurjit Sandhu made the initial breakthroughs.

The Sri Lankan tail, Lahiru Gamage and Vishwa Fernando made hefty contributions of 43 and 20 respectively as the visiting team posted a commendable 353 on the board after being 119 for 5 at one stage.

Durham in reply got off to a brilliant start as their openers, Phil Mustard and Adam Hickey added 63 before Fernando took his first scalp for the day. Hickey made a slow 28 before falling to Jayasuriya’s left-arm spin. One-drop batsman Gordon Muchall stroked 12 boundaries during his 88-ball 70 but he was trapped right in front by Jayasuriya which triggered a major collapse.

Former St. Sebastian’s College and Bloomfield C & AC speedster, Fernando who clocks around 140kmph was brought back by skipper Ashan Priyanjan to wipe off the tail and he did it with perfection. The home team were 199 for 5 at one stage but they lost their last five wickets for just six runs including a triplet of wickets in the 53rd over bowled by the 24-year old left-armer.

With 148 runs ahead, Sri Lanka ‘A’ openers, Udara Jayasundara and Madawa Warnapura came out to bat and negotiated the tricky 10 overs to add 24 runs in fading light on Monday evening.

The match will be continued tomorrow (Tuesday) for third day’s play.