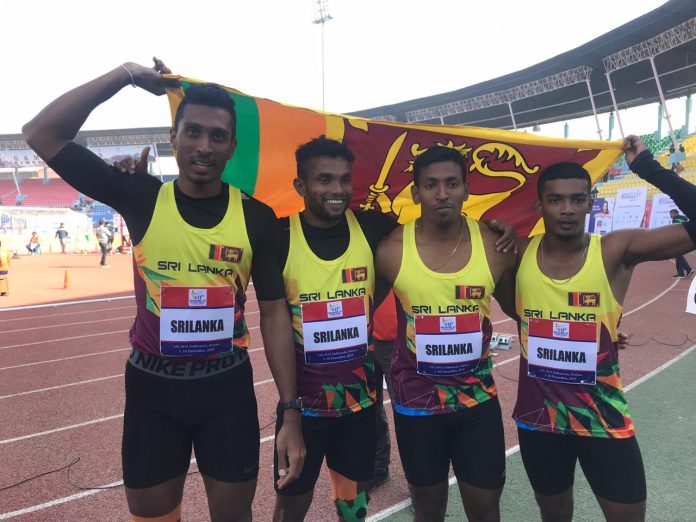 Nilani Ratnayake blew away the field to claim her 2nd Gold of the 13th South Asian Games, winning the Women’s 5000m at the Dasarath Stadium in Kathmandu a short while ago, while both the Men’s and Women’s 4x100m relay teams secured Gold in emphatic form.

Ratnayake surprised one and all when she clinched the Gold in the Women’s 1500m a couple of days ago, after receiving the opportunity to compete as a result of Nimali Liyanarachchi’s injury. Ratnayake, who is essentially a 3000m Steeple Chase athlete, was able to enter into 5000m, thanks to Marathoner Hiruni Wijeratne relinquishing her spot in the race. Making the most of the opportunity, Ratnayake finished well ahead of the rest of the competitors, with a timing of 16:55.18 to finish first.

The Sri Lanka relay teams both claimed Gold, with the Men’s team smashing the existing Games Record by 0.77 seconds with a timing of 39.14s. The sprint team of Himasha Eshan, Chamod Mihansa, Vinoj Suranjaya and Yupun Priyadarshana led from start to finish, with Eshan leading the charge with an excellent first lap. Chamod Mihansa and Viroj Suranjaya built on the momentum created by Eshan and by the time the baton arrived in the hands of Yupun Priyadarshana, the Gold was more or less won.

Team India, was far behind in 2nd place with a timing of 39.97s, while Pakistan claimed Bronze with 40.50s.

Similar to their male counterparts, the Ladies ruled from start to finish, with Lakshika Sugandi, Sarangi Silva, Sadeepa Henderson and Amasha de Silva dominating the race. Sugandi and De Silva both medaled in the Women’s 100m event, making Sri Lanka favorites to win the relay and they did just that, claiming Gold with a timing of 44.89s. India finished 2nd with a timing of 45.36s, while Pakistan won Bronze with 46.74s.

Earlier in the day, Kaushalya Madushani completed the 400m Hurdles event with a timing of 1:00.40 to clinch Silver for Sri Lanka after Asanka Rathnasena failed to medal in the Men’s event. Madushani was marginally behind Indian Nauma Parveen (1:00.35) in a tight finish.

The Shot Put event too was a successful one for Sri Lanka with Samith Fernando claiming Bronze (15.55m) and Tharika Fernando managing to clinch a Silver with a throw of 14.35m. India TajinderPal Singh took home the Gold in the Men’s event, with a Games Record of 20.03m.

Sri Lanka were unable to medal only in the Men’s 5000m and the Men’s 400m Hurdles events.

Keep it logged on to ThePapare.com for all the real-time updates on the Games!