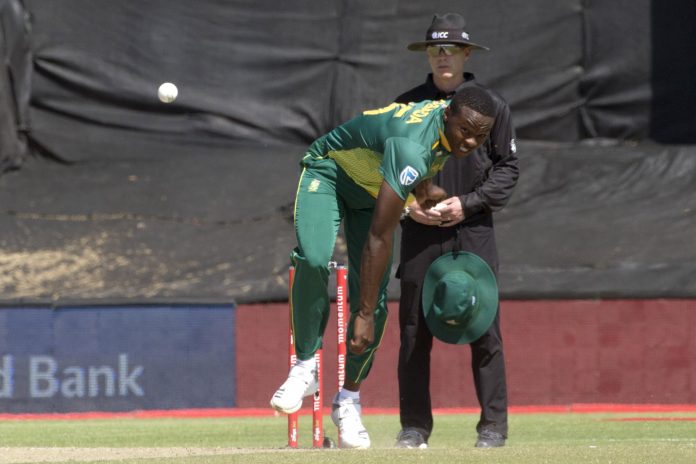 South Africa triumphed by four wickets in the final ODI at Paarl, comprehensively sealing a 3-0 ODI series win against Zimbabwe.

A combined bowling effort from the hosts restricted Zimbabwe to 228 before half-centuries from Reeza Hendricks and Heinrich Klaasen guided their chase. Though they stumbled in sight of the finish line, the result was never truly in doubt.

For Zimbabwe, there were some small signs of improvement. They had totalled up just 195 runs across the first two ODIs in some tricky batting conditions. Today, on a more benign surface, they managed to pass 200 in one go.

Sean Williams was the mainstay, helping his side recover from 44/3 after Solomon Mire was bowled by an Imran Tahir beauty, Craig Ervine nicked a quick, rising, seaming delivery from Dale Steyn to the keeper, and captain Hamilton Masakadza gloved a Kagiso Rabada short ball, Heinrich Klaasen again claiming the catch.

Williams’ 69 was Zimbabwe’s first half-century of what has been a torrid series with the bat, and it was a sprightly knock, containing 10 boundaries. He and Brendan Taylor, who made 40, briefly threatened to put on a sizeable total, but it always felt likely that Zimbabwe would fall away once they were dismissed.

Taylor was first to go, brilliantly stumped by Klaasen with his back foot just briefly in the air, before PJ Moor and Williams both fell in soft fashion, the former ramping a catch into Hendricks’ hands at slips as if offering catching practice, and the latter popping a chance back to Rabada.

When Elton Chigumbura slashed at a wide Andile Phehlukwayo ball and edged to the keeper, Zimbabwe were 182/7, and in danger of once again posting a sub-200 score. But Donald Tiripano and Brandon Mavuta added a brave 28 runs for the eighth wicket before Mavuta became Phehlukwayo’s second victim, slicing a full toss straight to mid-off.

Phehlukwayo was involved in the next dismissal too, this time as the fielder at long-on, who held onto a catch off Rabada offered by Kyle Jarvis, before Steyn brought an end to the innings three balls early as Tiripano mis-hit a slower ball to extra cover.

For Zimbabwe, it represented both their best batting performance of the series and an opportunity squandered. For South Africa, it was no more than satisfactory. Imran Tahir proved himself once again able of getting out good batsmen when set, while Phehlukwayo’s happy knack of picking up wickets with bad balls continued.

Steyn and Rabada’s class was never in doubt, but the form of Tabraiz Shamsi will be a worry. Playing his first game of the series, he leaked 72 runs in 10 wicketless overs. South Africa will be tempted to stick with him – his bowling style, left-arm wrist-spin, makes him an unorthodox asset, and his variations could prove useful on what are expected to be flat World Cup pitches. But this performance will have done his cause no good.

South Africa’s batting performance was similar. Though they chased down their target comfortably, and there was some reason for cheer, this wasn’t the dominant performance they would have hoped for.

The form of Duminy is the biggest concern. He made just 1, to go with 19 runs across the first two ODIs, even as he was promoted up the order. His dismissal, caught brilliantly at deep extra cover by Mavuta off Tiripano, hinted at a batsman trying to hit his way back into form. This time, it didn’t work.

Aside from him, what will have frustrated South Africa is their batsmen looking good but not kicking on. That has been a familiar tale for Aiden Markram throughout this series, though at least this time he was blameless, the umpire missing a big inside edge and giving him out LBW.

Captain Faf du Plessis, playing his first game of the series after recovering from a shoulder injury, pulled a half-tracker straight to midwicket, having moved serenely to 26 off 25. And Hendrixks, having made his first ODI half-century, to go with a century made in Sri Lanka, missed a straight ball off Tiripano and was given LBW.

South Africa were never truly in danger, but the cool head shown by Heinrich Klaasen will still have given them a boost. As he did in the first game of the series, he guided them to within touching distance of victory, though this time he fell just after reaching 50 rather than just before.

His dismissal was also soft, toe-ending a pull to midwicket to give Jarvis a wicket, but with the game in the bag, and the previous two balls having gone for four, he can perhaps be forgiven for trying to end it in a hurry.

In the end, South Africa limped to the finish line rather than sprinting over it. Phehlukwayo fell for a tortuous nine-ball duck having ended with just seven runs needed. It was left to Steyn, fittingly, to seal the deal. With bat and ball he has been the star in the last two ODIs.

Ahead of next year’s Cricket World Cup, this series offered hints to South Africa as to their final combination, but no more. Still, with a 3-0 series win sealed comfortably, they will be pleased with how their preparations are shaping up.