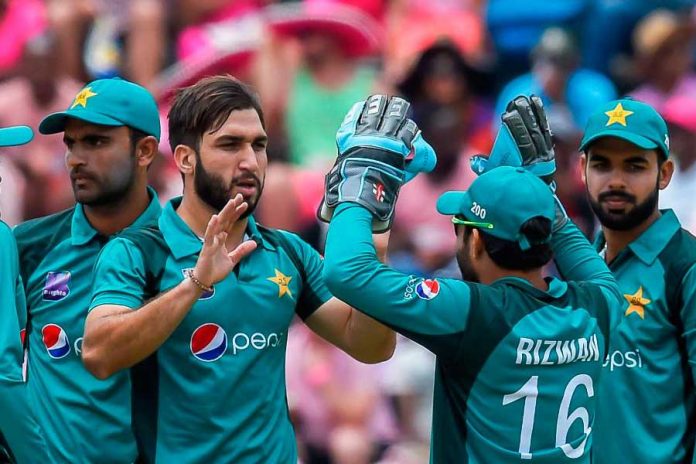 A thrilling spell of bowling from Usman Shinwari helped Pakistan on their way to a comfortable eight-wicket thrashing of South Africa in the fourth ODI at the Wanderers.

The left-arm seamer stunned the home side in a thrilling passage of play, taking four wickets across six deliveries as South Africa collapsed from 119/2 to 164 all out.

Pakistan’s top-order were untroubled by the total on offer, Imam-ul-Haq the star once again after his century in the 3rd ODI, his innings of 71 helping the visitors level the series at 2-2.

Shoaib Malik, Pakistan’s stand-in skipper for the suspended Sarfaraz Ahmed, won the toss and elected to field. The decision appeared to be a wise one early on, with Quinton de Kock (0) and Reeza Hendricks (2) falling victim to Shaheen Afridi’s new-ball spell.

The old guard of Hashim Amla and Faf du Plessis set about recovering the Proteas innings, and did so with aplomb, putting on a 101-run partnership, It was to end with a breakthrough from Shadab Khan, as a top-edged sweep off the leg-spinner saw du Plessis (57) send the ball into the safe hands of Mohammad Hafeez at deep mid-wicket.

Amla (59) departed not long after, his stumps rattled by Imad Wasim, before Mohammad Amir took his first ODI wicket in over six months, with David Miller (4) trapped in front of his crease.

The stage was set for Shinwari, returning to the side after missing the previous two ODIs. His sixth over was one to remember. Rassie van der Dussen (18) was to be his first wicket, an angled-delivery to the right-hander flicked the edge as the batsman slashed hard, with Mohammad Rizwan taking the catch behind the stumps.

Dale Steyn’s (0) stumps were blown away with the fourth delivery of the over, before Kagiso Rabada (0) poked at one outside off stump to edge behind to the gleeful Rizwan. The departure of Rabada left Shinwari on a hat-trick, and while Beuran Hendricks’ pads were rapped with an in-swinger, he survived the appeal for lbw.

Shinwari was to find joy once again with the first ball of his next over, with Andile Phehlukwayo (11) aiming a wild swing outside of his off stump, only to edge to Babar Azam at first slip. Shadab wrapped up proceedings with Imran Tahir trying to launch a maximum, only to find Imad at long on, who took a comfortable catch to end the South African innings on 164. While wickets were shared all round by the Pakistan bowlers, Shinwari led the way with figures of 4/35.

Pakistan’s openers were untroubled by South Africa’s seamers, bringing up their fifty partnership after ten overs. While Fakhar Zaman played the role of aggressor, driving intently through the off-side, Imam was the more patient of the two. Nevertheless, some crunching cuts were a highlight of his innings, as he continued his good form across the previous matches.

Fakhar (44) departed to Tahir, trying to take the attack to the South African spinner, a slog finding van der Dussen at deep mid-wicket. It proved to be of little disruption to the Pakistani batsmen, with Imam cruising in the accompaniment of Babar Azam (41). Although the left-hander departed with the scores level, Rizwan finished things off in style with a slashing cut for four from his first ball.

The fifth ODI will now serve as a decider, set to be played on January 30 in Cape Town.