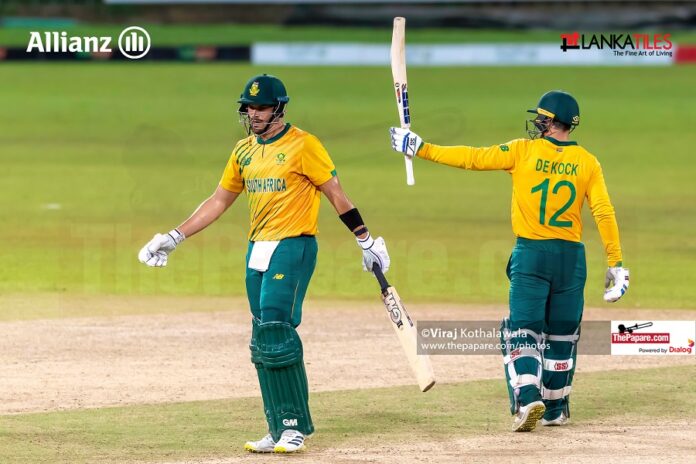 South Africa registered an emphatic nine-wicket win over Sri Lanka in the second T20I match to secure a 2-0 unassailable lead in the three-match series on Sunday at R. Premadasa International Cricket Stadium.

The Proteas spinners shared 9 wickets amongst them to bundle out the hosts to 103 in just 18.1 overs. This was Sri Lanka’s lowest score while batting first in T20Is at home. Quinton De Kock struck his first T20I against Sri Lanka as South Africa cruised to the target with 35 balls to spare.

Chasing 104 runs to win, the visitors were 65/1 in 9 overs when rain interrupted play for 38 minutes. But, De Kock and Aiden Markram made sure it was a smooth sail till the end for the Proteas adding 43-run unbroken stand for the second wicket.

Despite the pitch offering substantial turn for the spinners, the Proteas openers De Kock and Reeza Hendricks ended any hopes for Sri Lanka scoring runs with much ease. They added 62 for the first wicket, having raced to 49 runs in the powerplay to put the game beyond Sri Lanka.

Hendricks top-edged Wanindu Hasaranga to end the opening stand. Aiden Markram survived a close shave thanks to DRS, when he was adjudged LBW on the first ball after the break but the replays suggested otherwise. Apart of those two instances, Sri Lankan bowlers never looked like causing any trouble for the Proteas.

Earlier, Sri Lanka’s poor batting against spin was exposed once again as they lost their last 8 wickets for 44 runs. After opting to bat first, the hosts lost their previous game’s top run-scorer Dinesh Chandimal early when he holed out to mid-on off Anrich Nortje for 5.

Bhanuka Rajapaksa, came out at number three following 3 consecutive ducks. He got off the mark with a hook, which went to the deep fine leg fence. His best stroke came in the next ball, when he lofted Kagiso Rabada over the extra-cover boundary for a six. Rajapaksa made 20 off 13 deliveries before hitting one straight to the bowler – Aiden Markram as the hosts were 2 down for 38.

Kusal Perera, playing his first game following the recovering from Covid-19, struck a couple of lusty blows as Sri Lanka ended the powerplay with 52 runs on the board for the loss of 2 wickets.

However, after the fielding restrictions ended, Sri Lanka middle-order faltered as they lost their way as the South African spinners dominated proceedings on a rank turner.

Dhananjaya De Silva was stumped off Tabraiz Shamsi for 5, while skipper Dasun Shanaka was castled by the World No.1 Ranked T20I bowler for 10.

Sri Lanka continued to lose wickets as set batsman Kusal Perera missed a fuller delivery by Aiden Markram while trying to slog-sweep. He top-scored for the hosts with 30 off 25 balls.

Wanindu Hasaranga’s terrible run with the bat continued as he became one of Bjorn Fortuin’s two dismissals. Charith Asalanka tried to take Sri Lanka to a respectable score, scoring 14 off 20 balls, but he too fell softly against the spinners.

The Lankan tail didn’t last long as Shamsi and Markram ended with three-wicket hauls. Sri Lanka failed to bat out the 20 overs, which is concerning considering that they opted to bat.

During the toss, the hosts made two changes to their lineup with experienced wicket-keeper batsman Kusal Perera returning to the side, in place of Avishka Fernando, while left-arm spinner Praveen Jayawickrama was handed his T20I debut.

The third and final T20I will be played on the 14th of September (Tuesday).