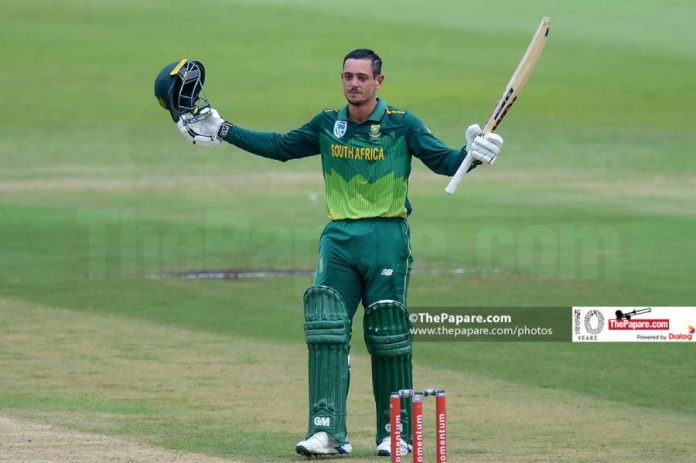 Quinton de Kock will lead South Africa’s T20I side in their upcoming tour of India.

Faf du Plessis has not been included in the squad for the three-match T20I series but remains in charge of the Test side. Rassie van der Dussen will serve as de Kock’s deputy in the series while Bavuma has been named as vice-captain of the Test side.

Anrich Nortje, Rudi Second and Senuran Muthusamy have all received maiden Test-call ups for the three-Test series against India, beginning in October. The Tests will be preceded by the three T20Is, and South Africa’s squad in the shorter format also includes three new faces: Temba Bavuma, Bjorn Fortuin and Nortje.

Chris Morris – who represented the Proteas at the 2019 ICC Cricket World Cup – did not make himself available for selection for the tour with no reason offered for his absence in Cricket South Africa’s announcement.

To prepare for the Test series, Aiden Markram, Theunis de Bruyn and Lungi Ngidi did not come under consideration for selection in the T20Is and will instead play for South Africa A against India A.

On the selection of the Test squad, CSA’s acting director of cricket Corrie van Zyl said: “All three newcomers to the Test side have more than earned their spurs through impressive performances in last season’s Four-Day Franchise competition.

“We feel we have covered all the options for the conditions we are likely to encounter on the sub-continent with Muthusamy and Dane Piedt, who was far and away the leading wicket-taker in our Four-Day competition, providing the back-up to Keshav Maharaj.”

“The T20 Series gives us the last chance to have a look at our leadership and batting options as the next edition of the ICC Men’s T20 World Cup is now little more than a year away which is why we have gone with an inexperienced leadership group,” said Van Zyl. “This is our last chance to do this before we settle on an established squad.

“I would like to stress that Faf du Plessis remains an important part of our plans for white-ball cricket.”

The first T20I will take place on 15 September in Dharamsala, with the Test series to follow, starting on 2 October in Visakhapatnam.