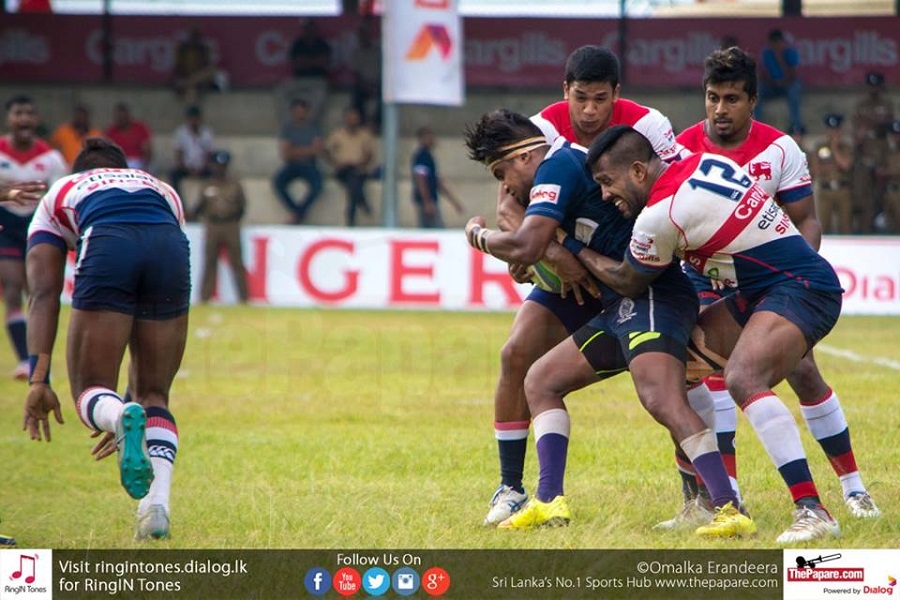 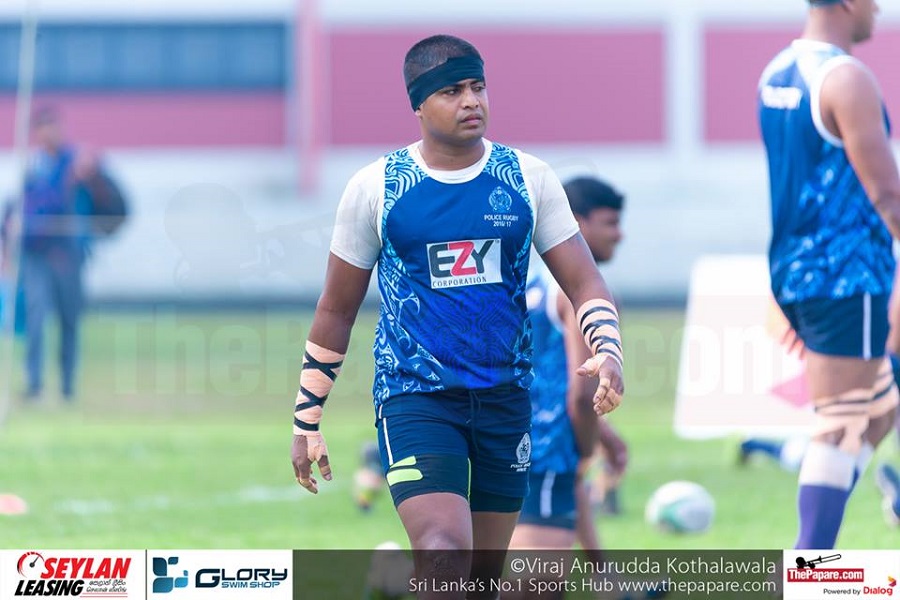 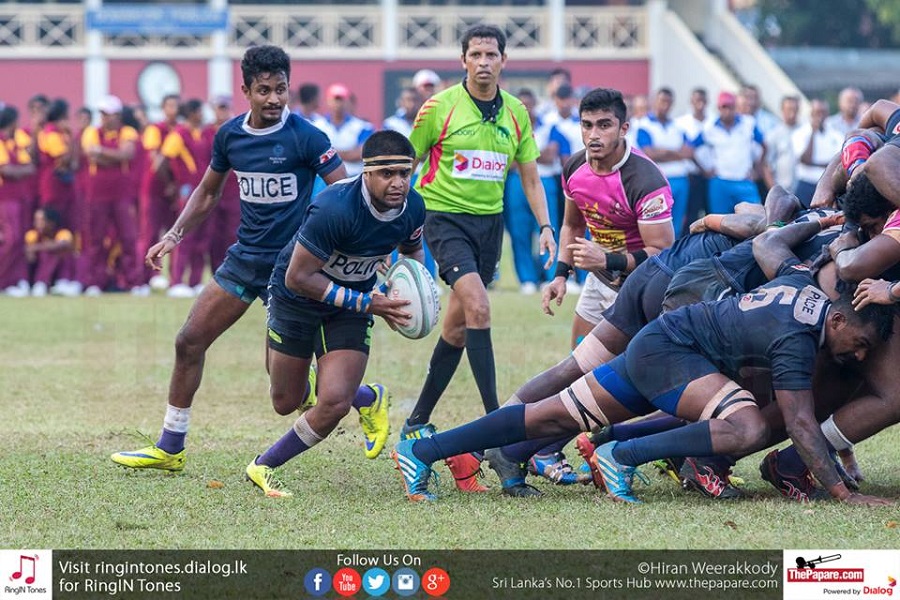 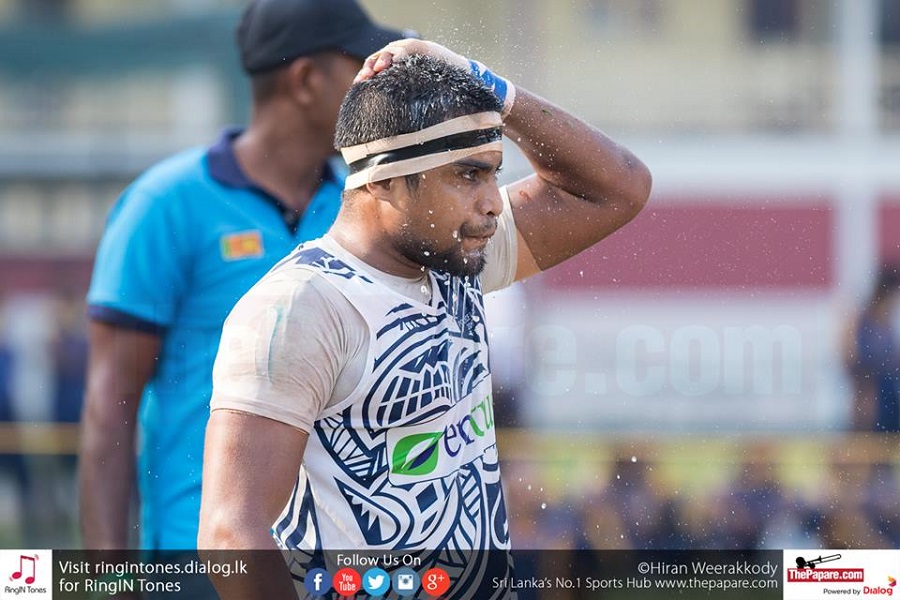 At 5’5 and weighing just over 80 Kilos, not many would even consider the protagonist of our story, Radeesha Senevirathne,  as a forward in the starting 23 of an A division club rugby team; spots usually occupied by the biggest men on the park. But as it always is, hard work and commitment cannot be kept down for long and Radeesha has become the shining star of an otherwise a disappointing Police SC outfit.

Hailing from Kandy, perhaps the only city in the Island where cricket takes a backseat to rugby, Radeesha Senevirathne was first drawn to cricket and joined practices at his Alma mater Vidyartha College, Kandy. However one of his class mates and current Navy SC center Kosala Thisera convinced him to swap to rugby at the age of 13. Having stepped into a new sport, Radeesha only managed to register his place in the starting XV in the Under 15 age group as a scrum half in the year 2002.

“In 2002 we (Vidyartha College) won the cup in the schools’ segment at the Singer Sri Lankan Rugby 7’s. Our 1st XV captain at the time Dhanushka Pushpakumara didn’t play for Vidyartha as he was a member of the national team. I remember how proud we felt when our college team won the competition and to see our college captain play in the Sri Lanka team was special. I think witnessing a tournament of that stature really made me fall in love with rugby and I wanted to become part of it”

His dream became a reality the very next year with coach Piyal ‘Robert’ Navarathne, also his very first coach, picking him for the 7’s squad that would play the Singer Sri Lankan 7’s in 2003. Radeesha thrived as a scrum half in the team and was lucky enough to play in the tournament for 4 years from 2003 to 2006.

“Robert Sir (Piyal Navarathne) was my first coach. I think he is one of the best talent scouts Sri Lanka has ever seen. He is the person who taught the basics and identified the talent of many of the current club rugby players from Vidyartha at a very young age. He was my coach when I started at Under 13 and also when I played my final year at 1st XV in 2006”

2005 was the year that Seneviratne really bloomed into a player of note. He formed an important partnership with his then Skipper and fly-half Charith Senevirathne that would define not only his rugby career but will have a telling affect later on in life. “Charith used to get me to come to his place before practice in the morning and late in the evening after school to get me to pass. We would spend hours practicing on our passing accuracy” he said. Radeesha had a fantastic season in 2005 and was entrusted with leading the Vidyartha 1st XV in 2006.

“I was really honored to be appointed as the captain of the Vidyartha 1st XV in 2006, It’s a privilege only a few receive in their lifetime and although we were in B division that year, we played against some of the top teams in the country in the likes of Trinity, Isipathana, Royal & St. Joseph’s who were also in the B Division.  Having lost a number of senior players, I was supported by Meeya (Chanaka Chandimal ) and my team mates to finish the season as the 5th placed team that year “

Soon after leaving school, this promising player did not consider the option of continuing rugby but started work as a Sales Executive. He was lured back to the oval ball game when his former coach convinced him to attend training at Kandy Sports Club. Radeesha relished the opportunity to train alongside the likes of Sanjeewa Jayasinghe, Radika Hettiarachchi and Nalaka Weerakody.  He recalls Jayasinghe and Imran Bistamin as two people who helped him immensely and encouraged him to improve his game during Kandy SC training. Realizing that he would not be able to get much playing time at the unbeaten champion outfit, Senevirathne crossed over and joined Air Force SC in the 2008 season where he was reunited with his former skipper and team mate Charith Senevirathne.

“In 2008 I was asked to join the Air Force team; I was interested straightaway because Charith and a few others from my college were at Air Force. I knew I would be able to fit into the system. The hardest thing was convincing my parents, as the war was at its peak and they were under the impression that if I join the Air force, I could be sent to battle if the need arose.”

Senevirathne’s heroics in the Inter Club 7’s for the Airmen tournament the same year earned him a call up to the national 7’s squad in 2008. Although he could not make the final cut, this experience encouraged him to continue playing the game he loved. Radeesha’s good form in 7’s opened a door for him in the corporate world when an invitation came from Walkers Tours attached to John Keels Holdings and he went on to become the Player of the Tournament.

“It was a great experience, people at John Keels are really passionate about the intercompany rugby and I was privileged to be adjudged the Player of the Tournament in the first tournament I took part” Radeesha said, about the passion for the oval shaped ball game at his work place.

Transformation to a pocket dynamo

“Coach Sudath Sampath and Dushanth Lewke who was the CR&FC captain at the time invited me to join CR&FC. I joined CR the following year and had a good run with the team.” With the arrival of two young scrumhalves who had represented the Sri Lanka Under 19s, Radeesha slipped down in the pecking order and did not get regular starts as a scrum half. A set back that would normally make a player disappointed and discouraged did not deter the ambitious Radeesha from turning up the heat at training as he started tackling with venom and making his presence felt.

“In 2013, before the Kandy match, ‘Lema’ (Shehan Pathirana) who was the CR #8 got injured, Coach Laga and Coach Bilal came up to me and asked whether I will be able to play 3rd row as I was good at defending. It was a home game for Kandy played at Nittawela and it’s a ground that has so much energy. I have never felt pressure at Nittawela and enjoy playing there, so I jumped at the chance although I had never played third row.”

Radeesha took to his new position like a duck to water and was influential at the back of the scrum for CR against Kandy. Nittawela is never an easy place to travel to but he didn’t seem like a player playing his first game in a new position and impressed everyone who witnessed the game by the courage he showed in tackling the big bulky foreign players who represented Kandy. This performance got the attention of the coaches as they continued with Radeesha as a third row player for the rest of the season.

Senevirathne now represents Police Sports Club. In his second year representing the Cops, Radeesha is the starting #8 of the club and has made a name for himself as a fierce tackler and  has mastered at the art of turn overs.  The switch to the third row has been a very successful one so far for him with his mobility around the park and knack to turn the ball over in rucks. This trait of Radeesha makes him a dangerous tool in the defense, but as is the case with most good 3rd row forwards, Senevirathne lives on the edge and is prone to getting penalized. The 2015/16 and 2016/17 seasons have seen Radeesha receiving many yellow cards and a few suspensions.

“Yes, yellow cards have been a problem. When I get sin binned; my team suffers and has to cover for me. It’s difficult because different referees translate the many rules around a ruck in different ways, so you have to adjust to the referee quickly, this season I think I managed to get my timing right. If am not able to fully commit to the tackle… It’s better to be the assist and try to turn the ball over”

Radeesha has quite an inspiring tale to tell when asked about the support he receives from home “My parents have been the best parents one could ask for. Both of them are deaf and hence cannot speak but they have provided everything for my older brother, me and my younger sister. My older brother is an Airman and sister just finished her studies. My parents have made a lot of sacrifices despite the difficulties they face and I am happy we can make them proud. They are my heroes”

This pocket dynamo’s connection to Charith Seneviratne was taken to a new level last year, when he tied the knot to childhood sweetheart Achini Senevirathne, Charith’s sister.  Radeesha claims telling Charith about his feelings for his sister was the most embarrassing thing he has done in his entire life.  “That was the most embarrassing day, we knew each other from school days and he is my friend. I didn’t want him to think badly of me, but we are in laws now”.

Wanting to give back to the game and to pass on the tricks of the trade that he has picked up, Radeesha is a part of the S. Thomas’ junior coaching team. He thanked the management of Cinnamon Red hotel, attached to John Keels holdings for the support that they have given for throughout his rugby career and added that “It’s a great feeling when your colleagues are interested in the game and know that you have their support”

A gentle small man with a giant heart and ‘never say die’ attitude, Radeesha Senevirathne doesn’t have many foes on or off the field. ThePapre.com thoroughly enjoyed taking a closer look at Radeesha and we thank him for his time and wish him all the very best for bigger things to come in the future.