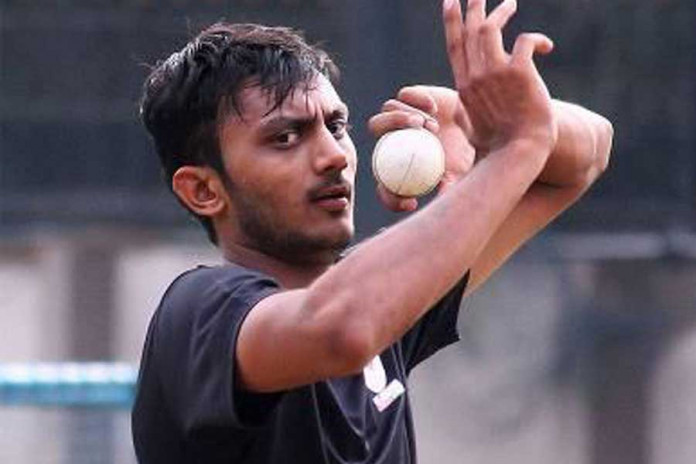 Left-arm spinner Axar Patel may make his Test debut after being asked to fly in as replacement for another left-arm spin bowler, Ravindra Jadeja, who has been suspended by the International Cricket Council (ICC) for the third Test in Pallekele after accumulating too many demerit points.


Axar, who is currently with the India A team for a tri-series in South Africa, has been asked to rush to Sri Lanka and join the Indian team there ahead of the final Test, which begins on Saturday. The tall left-arm spinner’s performance in the tri-series has been impressive. He has taken six wickets at 15.50, with a best of 3/33 against Afghanistan A. Axar is likely to leave for Sri Lanka after playing in that the final of that tri-series against South Africa A in Pretoria on Tuesday.

This is a maiden Test call-up for Axar, who has only played in limited-overs cricket for India so far. He has 30 One-day Internationals and seven Twenty20 Internationals in the blue jersey. He last played for India in the fifth ODI against New Zealand in Vizag on October 29. The 23-year-old had scored an 18-ball 24 and taken two for nine in just 4.1 overs, including the key wicket of Kane Williamson, as India thrashed the Kiwis by 190 runs to clinch that series 3-2.

Overall, the Gujarat bowler has taken 35 wickets in ODIs at an average of 30.20, with best bowling figures of 3/39, and seven wickets in T20Is. He is being considered a handy replacement for ne so far in this series despite the presence of the turning wickets here, Axar may just pip chinaman Kuldeep Yadav, who has been with the team as the third spinner. It’s learnt that the Indian team management is hopeful that like Jadeja, Axar too can make the ball kick up inconveniently with his left-arm spin, besides chipping in with useful runs with the bat lower down the order.

“Axar is someone who can do a Jadeja with the bat too, though he averages just 14.16 and has a highest score of 38 in ODIs. The left-hander, though, has some decent knocks in domestic cricket, averaging 48.45 after 23 games in first-class cricket, with 10 fifties and a hundred, besides taking 79 wickets.

If India stick to playing two spinners in Pallekele, something which they have do make the ball bounce as much as Jadeja, which is what we’re looking for. He can be dangerous in these conditions,” said a source in the team management.

Two years back, Patel had taken four wickets without conceding a run in six overs to help India A thrash South Africa A by an innings and 81runs in Wayanad in a four-day game. Though he’s not in the same league as Jadeja in the batting and the fielding department, Patel has performed decently whenever he has replaced the Saurashtra allrounder in the limited-overs team.