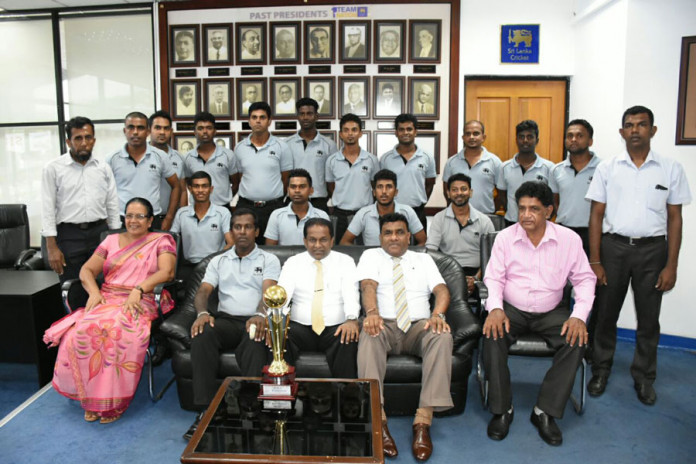 Cricket has proved to be a fusion to the differently able, and that the country’s deaf cricketers have been quick to seize the opportunity since the Sri Lanka Deaf Cricketers Association (SLDCA) was formed in 1995 speaks of the turning around effect to life sports can impart.

The best manifestation of that fact was a band of enthusiastic deaf cricketers drawn from island wide trekking in to the Sri Lanka Cricket (SLC) headquarters Friday afternoon. It was indeed a moment to savour defining moment for the young men that lack of audibility has by no means dented their enthusiasm to explore the challenging arena of the bat-ball game.

Fifteen players drawn from as far as Jaffna, down South Galle to Matara, and Colombo the sharing in refreshments with the SLC President, Thilanga Sumathipala and finding way and means of fronting up to their future cricket was on the cards. That they had passaged to a point of posing with the SLC top brass in trophy glitter as the runners-up of the 2016

Deaf Cricketers Asia Cup to India was hard earned stuff. It was indeed a heartening leaf to their cricket, and a spring in their step as they look to their next hurdle – the T20 World Cup to be staged in Sri Lanka.

Of course, the cricket loving SLC cricket chief was quick to offer them encouragement. Having assessed their preparatory requirements, Sumathipala, assured the Sri Lanka Deaf Cricketers Association officials the ground work facilities – playgrounds to be utilized for practices ranging from Moratuwa which has been their base to other venues, and fitness and practice related machinery such as gym equipment and bowling machines in a wholesome format.

That was apart from the financial aid Sri Lanka Cricket would extend to the SLDCA through Cricket Aid in the wake of the Rs.1 million for the association’s expenditure for last year’s event. Sumathipala, who was flanked by SLC Vice President, M. Mathivanan at yesterday’s event in his office auditorium, observed that the world cup first round matches could be worked out mainly in Moratuwa, and the main matches in Colombo. Around eight countries will compete.