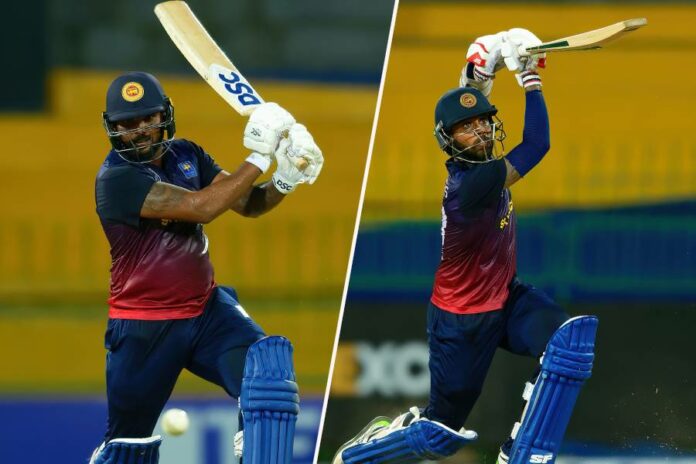 The 6th and final round robin game of the SLC Invitational T20 League took place between the SLC Reds & the SLC Blues. After the SLC Greys walked out with a memorable win over SLC Greens in the penultimate game of the league stage, this was a must win match for the Reds with their spot in the finals at stake.

The Reds who won the toss and elected to bat first, had a quick-fire start thanks to their Skipper Kusal Mendis, who made full use of the power play. However, with the wickets of Bhanuka Rajapakse and Kamindu Mendis falling in the same over, Mendis needed someone to reconstruct the innings with him. That aid for him came in the form of superstar Wanindu Hasaranga. The pair added 125 runs for the 4th wicket in just 75 deliveries to make sure the Reds posted a total of 178 at the end of their 20 overs.

Mendis, who played a Captain’s knock to register his highest T20 score, made 86 off 60 deliveries, which included 10 fours and a solitary six. His partner Hasaranga scored an unbeaten 69 in just 41 deliveries. This knock included 3 fours and 5 half a dozens for the star allrounder. Suminda Lakshan was the pick of the bowlers for the Blues with figures of 2 for 29 in his allotted 4 overs.

Chasing a tough target of 179, the Blues who started well in the powerplay thanks to Lahiru Udara’s cameo, faltered pretty quickly as Hasaranga and the teenager Dunith Wellalage bowled exceptionally well in the middle phase to neutralize the Blues completely. The Blues innings, which really went nowhere in the final 10 overs, ended at a total of 145, which was 33 runs away from what the Reds posted.

Sadeera Samarawickrama who really hung in there but was unable to do much of what he is usually capable of, scored 40 off 38. At the same time Udara, who looked really good at the beginning, scored 35 off 25. Hasaranga, who did his job with the bat earlier, bowled another economical and destructive spell to take 2 for 18. Asitha Fernando also chipped in with some quality death bowling, and took 2 for 25. Youngster Wellalage was also on target throughout the day by taking 1 wicket for a miserly 22 runs in his 4 overs.

With this result, the SLC Reds claimed the top spot in the points table at the end of the round robin stage, followed by the SLC Blues in the 2nd place. The two teams will clash in the all-important final of the SLC Invitational T20 League, on the 15th of August at 7.30PM.