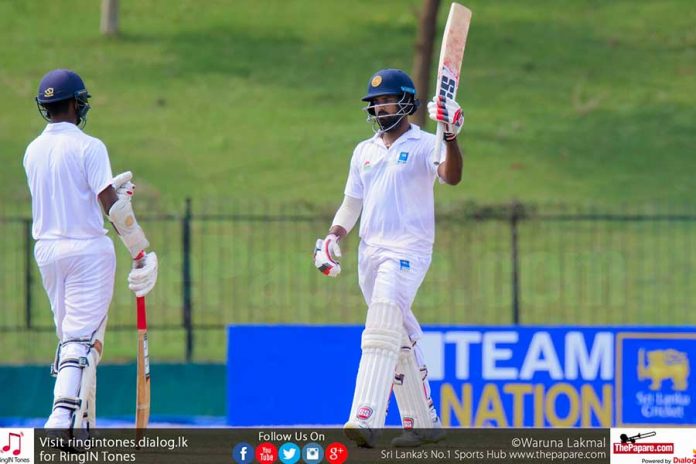 Baduraliya vs Ragama CC – Tier A

Lahiru Thirimanne, though unable to find a place in Sri Lanka’s recently concluded Test series in Zimbabwe, hit a stunning 187* to make sure Ragama CC did not concede first innings points against Baduraliya SC.

Resuming the third and final day on 28/2, Ragama CC managed to bat out 105 overs in total while making 366/9. This was after Baduraliya posted 505/9 declared, batting on for almost 147 overs during the first two days.

Thirimanne found an able partner in Udara Jaysundara, as the duo put on 174 runs for the 3rd wicket, but the dismissal of Jayasundara for 76 opened the gates for Baduraliya SC to go in search of a first innings win.

Ragama CC continued to lose wickets while Thirimanne held firm at one end, but when Shiran Fernando fell as the 9th wicket with more than 10 overs of the day remaining, Ragama CC almost had no hope left.

However, youngster Kalhara Senaratne gave admirable support to Thirimanne as the duo managed to survive the final burst from Baduraliya to earn a hard fought draw, making sure Ragama CC did not concede first innings points.

Thirimanne’s epic knock had 21 boundaries, while he looked solid during his 307 ball knock.

TM Sampath was miserly as he picked up 3/55 bowling 30 overs for Baduraliya, while Lahiru Samarakoon also picked up 3/119.

Bloomfield completed a brilliant outright win when they hunted down 199 in their fourth innings against Nugegoda SWC.

Nugegoda managed 231 runs in their second innings, with Jahangir Mirza and Irosh Samarasooriya making half centuries.

This left Bloomfield to get 199 runs for an outright win during the latter half of day three, before they romped home in just 34.3 overs, with their veteran batsman and coach Chamara Silva leading the way with an unbeaten 60*.

Dilhan Cooray also hit a half-century at the top of the order to finish the match with twin half centuries, while Gayan Sirisoma was the star with the ball by going on to capture 12 wickets in the match for Bloomfield.