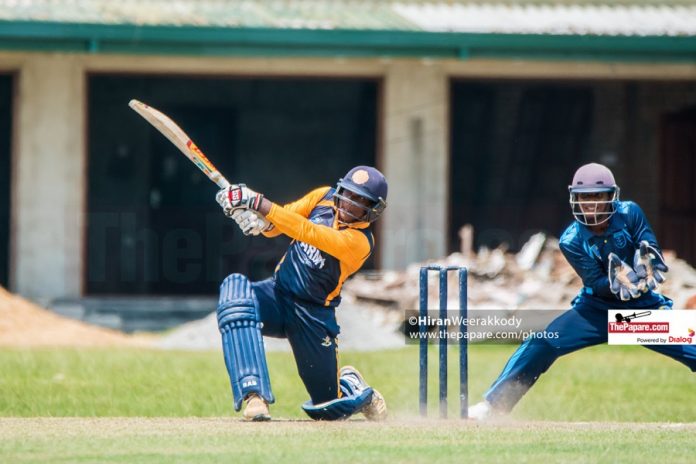 Moors SC and NCC booked their respective places in the final of the SLC Major T20 tournament when they beat Army SC and CCC today (25).

Ashan Randika hit a mesmerizing 117 off just 59 balls, but it wasn’t enough for Army SC who couldn’t deal with a commanding batting effort by Moors SC.

Known as ‘gora’ in the domestic circuit, Randika hit 5 sixes and 14 fours in a breathtaking knock, but didn’t get much support from the other end as the next best score was Asela Gunaratne’s 17 in a total of 186/6.

Chamara Silva guided Moors SC with an unbeaten 46* off just 23 balls – while in the process he also became the highest run getter of the tournament with 249 runs – in the run chase, but it was Nimanda Madusanka’s clean striking that helped Moors reach the target with almost 3 overs to spare.

Neighboring clubs NCC and CCC played out a thriller of a semifinal at P. Sara Oval, with the former emerging victorious by just one run.

NCC posted 142/9 batting first on a tricky surface with Mahela Udawatte top scoring with 48 and Dinesh Chandimal chipping in with a useful 31.

CCC, NCC, Army SC and Moors SC secured their respective spots in the semi-finals of the Sri Lanka Cricket (SLC)

Hasaranga wasn’t down yet as he hit a fluent 38 with the bat, but it wasn’t enough for CCC who could muster only 141/9 in their allotted 20 overs.

It was right arm leg-spinner Saranga Rajaguru who derailed the CCC run chase with 3/24, while also bowling a superb final over conceding just 9 runs and picking up the key scalp of Lahiru Madushanka who hit him for a six off the first ball of the final over.