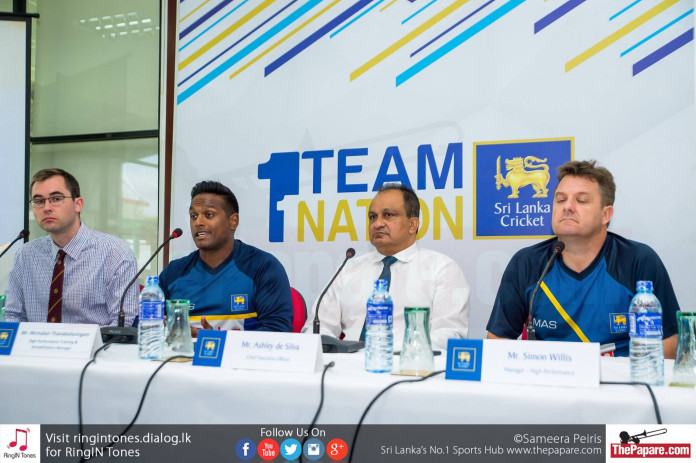 Sri Lanka cricket today (26) introduced former Olympic medalist and elite athlete, Australian Podiatrist Dr. Nicholos Sprenger, who has been consulted to specialize in the podiatric assessment and remedial assistance for the National cricketers.

Sprenger is one of the Gold Coast’s most respected Podiatrists, who practices in all aspects of conservative care of the foot and ankle, as well as post-operative care following orthopedic surgery of the foot and ankle. As an athlete himself, he has special interest in Sports Podiatry and has been working with the Queensland Academy of Sports Athletes, the Queensland rugby league referees and the Brisbane Lions AFL.

Identifying unusually high incidents of injuries plaguing the national performances squads (NPS) of Sri Lanka the Executive committee of SLC contracted the services of Sprenger, who has in sessions spanning over 30 minutes each, assessing individual players through passive, active and dynamic testing.

Nicholas Sprenger said, “it is important that each player should wear proper shoes to prevent injuries and specially the fast bowlers, He recommended Asics as the best shoes going forward he also mentioned every player does not need podiatric treatment. He also said as a batsman, it is very important to bat longer innings, running between the wickets will be a key factor to be in a winning team. Sprenger also said he will keep a track on each player and treat them for their needs”.

Ashley De Silva (CEO) said, Sri Lanka Cricket will always look after the players at any cost and we are concerned about their fitness levels. De Silva believes Sprenger will help the players with podiatric and will gain a lot to their performances in the future. He will keep in touch with the current players and the upcoming players and give them guidelines to follow. All the other countries do use Podiatric assessments and its time that we also facilitate our players with modern assistance”

Podiatry is the science of the study, diagnosis and medical and surgical treatment of disorders of the foot and ankle lower extremity.