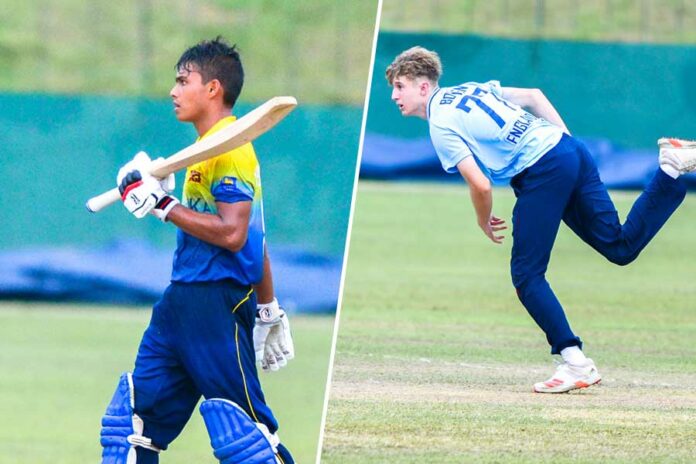 The visiting England U19s drew first blood of the series by defeating the home team by 26 runs in the series-opener.

What could have been a regulation run-chase for Sri Lanka was totally messed up by the tail simply due to lack of experience. They required 27 runs to win off 24 deliveries with a set batsman in Ranuda Somarathne, who was on 57, and Vinuja Ranpul, a top-order bat for his school, at the crease. They also had 4 wickets in hand for the job.

However, the game only lasted 9 more deliveries from that point. A change in the bowling, left-arm seamer Joshua Boyden came into the attack, and 3 Sri Lankan batters thought that was their ticket to party. All three fell in identical manner trying to go over the top against the wily fast bowler, who got the better of them instead.

Having won the toss and opting to field first, Sri Lanka handed debuts to 3 of their youngsters – Anjala Bandara, Malsha Tharupathi and Ranuda Somarathne.

They had made 4 changes to the squad that played against Bangladesh and coming into this Youth ODI, having swapped 5 players from the team that played their last Youth ODI.

Danal Hemananda, Wanuja Sahan, Sasanka Nirmal, Sadeesh Jayawardena and Sadisha Rajapaksa all had to sit out to make way for the 3 debutants, offie Trevin Mathew and speedster Matheesha Pathirana.

Sri Lankan Skipper Dunith Wellalage stood a class apart from his peers with a stellar performance with both bat and ball.

He returned extraordinary figures of 5 for 30 in 9.3 overs with his guileful left-arm orthodox spin.

Full credits go to the visiting batters who put on a collective show to take their team to the winning total of 242 runs. William Luxton was the highest scorer for the English team, as the Yorkshireman made 44 runs for his merits.

Sri Lanka got off to a fine start too with the opening pair putting on a 50-run stand, but faltered after the first wicket as the next 4 wickets fell within the span of 30 runs.

It was the debutant Ranuda Somaratne and the Skipper Wellalage who joined at the centre to steady the ship once again for Sri Lanka. The pair put on a 102-run partnership for the 6th wicket putting Sri Lanka well in course for a victory. Wellalage perished with a run-a-ball 68 runs.

The tactical excellence of the English Skipper Jacob Bethel is also noteworthy, as his call to bring in the seamer Joshua Boyden at the in 47th over changed the game on its head right away. The Lankans were undone for 217 runs by the 48th over.