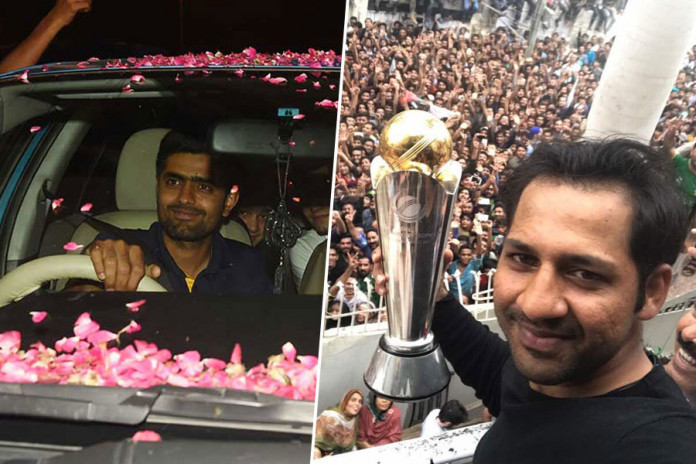 Hundreds jam streets outside captain’s Karachi home for glimpse of hero and his sliverware.

Pakistan’s victorious Champions Trophy cricketers have been welcomed home as heroes, with huge crowds gathering as the celebrations continue unabated.

Pakistan completed a stunning form reversal to thrash arch-rivals India by a whopping 180 runs in the Champions Trophy final at The Oval on Sunday, led by a century to Fakhar Zaman and devastating bowling spells by Mohammad Amir and Hasan Ali.

Fakhar – who had only earned his one-day cap earlier in the tournament – later revealed he had battled a stomach bug to take his place in the playing XI for the final.

And Hasan was named Player of the Tournament and awarded the Golden Ball for his 13 wickets in five matches at less than 14, including the final scalp of Jasprit Bumrah that sparked worldwide celebrations for their supporters.

At The Oval, Pakistan fans were delirious with joy, dancing and chanting outside the ground and in the streets of the south London suburb of Kennington while in Birmingham supporters invaded the streets and let of firecrackers.

However, it was home in Pakistan where the adulation has reached fever-pitch proportions.

Armed guards were required to make a path through the throngs as hundreds of fans gathered at the Karachi International Airport as the players returned home from London with the silverware.

Men, women and children packed the airport, and captain Sarfraz Ahmed held up the trophy to loud cheers and chants of “Long live Sarfraz!” as a police band played patriotic songs nearby and players’ vehicles were showered with petals.

“(We won) thanks to Allah and the prayers of the whole nation,” Ahmed said in brief comments as he jostled his way through the crowd of well-wishers.

Sarfraz was showered with bouquets and given a traditional skull cap and an ‘ajrak’ shawl, which is usually presented as a mark of honour.

Supporters packed the street outside Sarfraz’s Karachi residence, as well-wishers adorned the neighbourhood with colourful lights and Pakistan flags and climbed on rooftops and balconies for a glimpse of their hero.

And the inspirational leader did not disappoint, appearing on his balcony – with the trophy still firmly clutched – to lead the masses in a chant of “Pakistan Zindabad”.

The huge support underlines Sarfraz’s plea in the immediate aftermath of the final, when he called for international teams to return to Pakistan for top-flight cricket.

With the exception of Zimbabwe’s tour two years ago, Pakistan have had to play all of their ‘home’ matches outside their own country since a 2009 terror attack on Sri Lanka’s team bus in Lahore.

“I hope this win will boost Pakistan cricket and hopefully all the (major) playing nations will come to Pakistan,” said Sarfraz.