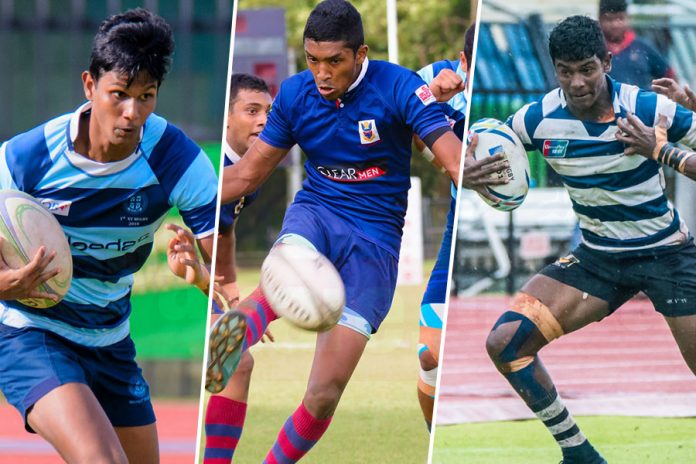 A cat is truly amongst the pigeons. Sharp claws and an interesting purr, the double blues and Kingswood have certainly earned the right to be worried about. Turning up at the right time with the right play, the reservist especially, many thanks to Royal pulling out, knocked out longtime powerhouse– Isipathana with a tantalizing, last-minute thriller.

That’s the beauty of Knockout rugby. Tearing up the script of run on form, Wesley and Kingswood, who is another maverick who bounced out a wayward Trinity, have sent warning signs all over for the fancied saints. Like cats on a hot tin roof, loaded on half a dozen Red Bulls, showing the enthusiasm of a toddler chasing a beach ball.

That is, St Joseph’s and St Peter’s have genuine upsets to watch out for as both Wesley and Kingswood have shown the right attitude and required fortitude to win sudden-death rugby. Further to that, Kingswood– being the only Kandy based team in the final four, there is a very realistic chance that we could see a rematch between the lesser fancied sides which will essentially be a shot at redemption.

Favorites, St Josephs and Peter’s had untroubled progression playing the bottom seeded opposition. Maliyadeva, who got a wildcard entry thanks to S Thomas’ backing out, and St Anthony’s, who possibly was the most disappointing of the eight teams, succumbed as expected.

None of the teams played vintage rugby for a full seventy minutes but you don’t need to. To win this competition is to win the key moments and stay in the hunt. Tactics and strategy will determine that and a sense of hunger which Kingswood seem to be showing, followed by Wesley then shared by the two heavyweights. Striking an equilibrium with all of the above might just be the formula towards an arguably, longish season.

Rugby returned in earnest to the stadium and what a wonderful sight it was, reminiscent of the good old days. Great clarity of ball placement due to an elevated camera angle, what a sight it was. Moreover, well-plastered fencing with Sponsors MILO getting full value for money on a brilliant HD stream from thepapare.com.

A white-hot St Joseph’s, who are odds-on favorites to win the KO versus Maliyadeva, a mercurial beneficiary thanks to S Thomas’ pulling out. They more than made up for their status as bottom seeds with an entertaining display and will to run the ball at every given opportunity.  That is what KO rugby is all about. I for one am very happy to have seen them instead of the Mt Lavinia school, chancing their arm and throwing everything they had, leaving nothing in the tank.

Joes got into early gear and as expected unleashed their back division, running in seven tries. Although the score suggests a blowout, Maliyadeva tried beyond expectations and kept pace with the big boys. An obvious sign of a well-coached and trained outfit. Coach “Castro”— Ananda Kasthuriarachi has certainly got an interesting project going out Kurunegala ways.

Knock out rugby as it should be, was eventually won with some comfort by the Josephians owing to some swift footwork, good hands and intelligent release of their backs at the right moment. It was clever rugby, where they did what was required and sent the “revolutionaries”, who by no means disgraced themselves, packing.

A clear sign that these Devans won’t be easy beats and with a good pre-season to boot, 2019 may give them a chance to upset the apple cart. Some really telling hits and carries from their forward pack, awoke the Josephians at times to the rupturing cheers from the grandstand.

Nonetheless, SJC further enhanced their status as firm favorites and had the ideal preparation going forward.

A local derby got off to a flyer with both teams trading a flurry of sweeping moves. Kingswood looked as if they had come well prepared for a war, wanting to go to the well. That, they did. Trinity, though initially, sometimes-hesitant, warmed to the task and sensed that they only needed to hang on to the ball and wait for an inevitable penalty.

The penalties did come and they did shoot their goals but a lack of discipline in hanging onto the Gilbert towards the end cost them dearly. Trinity’s forward pack were guilty of a number of unforced errors. Sloppy handling at vital times and gifted possession on a gift-wrapped platter.

Kingwood, fresh off winning the Blaze shield, showed tremendous run on form and entertained the crowd. Again, using the width of the field and countering from broken play, they got their fast threes into motion. They too have identified what their strength is and were grateful for the gifts Trinity offered. None more so obvious than the last try of the game, where they fielded a feeble kick by the Lions, right into their hands, spun it wide and thanks to a brilliant individual effort from Hirusha Sampath, sealed the deal and a semi-final spot.

Further, a telling blow to a wreck of a season Trinity has endured, showing more or less no run on form and making far too many errors in the process. Knocked out at the first hurdle and they have a mountain to climb if they are to make any headway, next year. What’s more, they have to find a new coach, soon. Challenging times for the Lions.

Easily the game of the weekend gone by and most exciting of the sprint cars over the quarter mile. Wesley is a team who needs to play regular rugby, they are the sort who keep getting better with more game time under their belt. Just as they almost drowned out Royal, with exciting and at times– awkward plays out of nothing, Isipathana fell victim many thanks to an adventurous bust up the middle with time almost up, backed up by fantastic support play from Wesley’s back line.

Given the unpredictability of both sides and stop-start form, Isipathana would be bitterly disappointed with this loss, especially after almost rolling St Joseph’s in their last hit out from the season proper. Wesley, over the moon– given that they bounced back from losing to Kingswood.

What was notable and impressive was their tactical approach. Setting up close and tight forward busts where they secured good ruck ball. Allowing for gain line go forward and then looked to attack from depth and out wide. Provided they can continually and consistently do this for seventy minutes, Wesley may well find themselves be KO champions. This will be the big “IF”, consistency and eliminate soft-handling errors points to focus on.

Pathana, who gave away a fair physical advantage, stayed afloat thanks to some tactical kicking and controlling of territory. Eventually falling victim to missed tackle from a turnover, set piece. Had this not happened, we would have seen some extra time from a fifteen all draw. Skipper and lone wolf Manilka Rubeyru, a stand out yet again in a losing cause.

A very fierce start to a game which ended in a very lopsided result. SACK, who pressured the more fancied Petes, bungled time after time and gifted possession at crucial phases. They were all converted into points quite handsomely by a very slick and efficient “Bamba Brigade”.

Six tries to be exact and a huge blow out in the end. This was also, subsequently a trophy game between the two sides for the Rector’s (trophy). Huge disappointment for the Katugasthota side and not a true reflection of their ability. As for the Petes, another soft kill and a straightforward progression to what appears a banana skin in waiting. Wesley.

They ought to be wary of this challenge and not walk into the trap they did in the season proper, twice. As the opposition stiffened, getting caught out with the wrong tactics and intensity.

Moment of the week:

Kingswood’s stunner of a try to seal the game against Trinity. It was broken play at its visually-stimulating best. Receiving and returning a kick with compounded interest, in a flash of sidestepping brilliance, second five Mohamed Shazam set Nittawella alight with a scything run through to find Sachintha Seneviratne, who touched down for my moment of the week. May we have some more, please!

Wesley and their forward pack who battled it out and gave their unpredictable and brilliant back division a genuine shot at opening up holes. They did exactly that. Learning from their mistakes, putting in a more accurate performance saw them KO Pathana in a great arm wrestle. Top marks for a valiant effort for which they deserve this week’s accolade. Maliyadeva, a close second for an audacious dig at tournament favorite St Joseph’s.

Extremely pleased to see the lesser of the sides from the second tier get a crack at the big league, at the expense of the artful dodgers Royal and S Thomas’.  It was as if no one really missed Kim Kardashian and her on-call pool cleaner, whose name I forget. This will give the tier two teams valuable exposure and true run on form for season 2019. Critical exposure for mind muscle memory.

As stated prior, a banana skin in waiting for St. Peter’s. Their semi could very well end up being the game of the tournament. We shall wait and see.