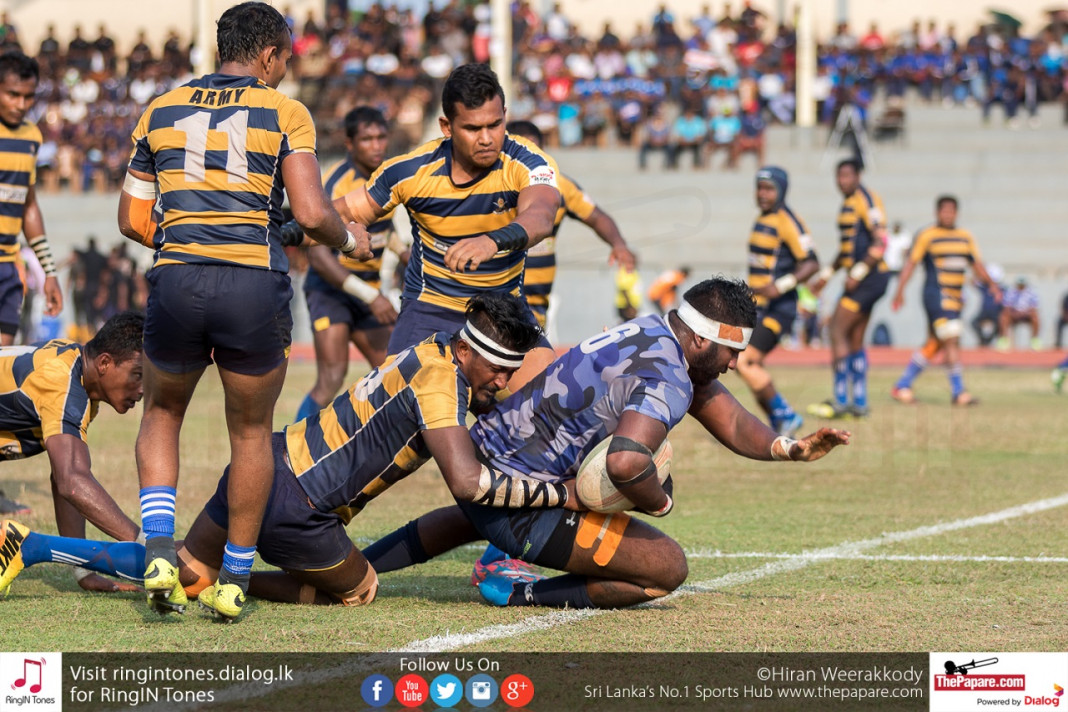 An evenly contested match between Navy SC and Army SC ended with a 2 point victory for Navy SC at Diyagama.

Navy SC kicked off proceedings in this mid-table clash. The sailors did not take much time to trouble the scorecard; Hashan Maduranga intercepting a lazy pass by an Army player to run all the way to the try line. Thilina Weerasinghe added the two extra points to give his team a 7 point lead.

The home side had the chance to score but Omalka Gunaratne stole the ball from them right on the try line to keep the lead intact. Shortly afterwards Gayan Salinda reduced the deficit through a penalty, Navy penalized for offside play inside their 40m. 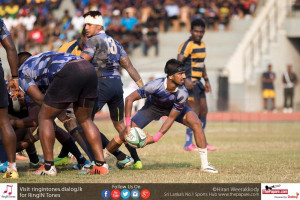 17 minutes into the game, the soldiers took the lead for the first time in the match thanks to a sloppy line out taken by the visitors; the flanker fumbling the ball which bounced right into Suramya Herath, who sprinted all the way from the 40m line. Gayan Salinda made no mistake in executing a perfect conversion.

The Sailors almost took back the lead a few minutes later when Omalka stole the ball and forced his way into Army Territory. The Soldiers recovered well only to give away a penalty for Navy inside their 40m. Thilina Weerasinghe with a successful penalty, brought the game back to a deadlock.

From then on it was all Navy, they looked more relaxed and comfortable on the field. Their second try for the day came in the 35th minute through a line out on the half way mark. Navy worked the line with brilliant offloads and quick hands to take back the lead. It was Thilina Weerasinghe who went over to give the finishing touch.

The home side managed to narrow the deficit, seconds away from the half time whistle, through another penalty by Gayan Salinda. It was an evenly contested first half with both teams making comebacks after falling behind. 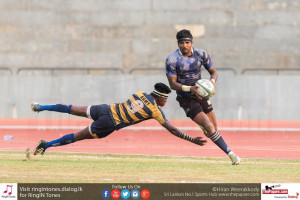 Navy bounced back with an unconverted try after a series of missed opportunities; Dulanjana Wijesinghe forcing his way over the line, after taking the ball from a successful line out on the 40m. They went on to score their fourth try 3 minutes later. The scrum ball went to Dinush Fernando, who ran from the sideline and chipped the ball into the playing field. Thilina Weerasinghe gathered the ball and went all the way to score under the post and then added the extras with ease.

The Sailors were down to 14 men when Sajith Saranga was sent to the naughty chair. The Soldiers used this one man advantage and brought down the deficit through a converted try by Upul Abeyratne; yet another set piece from Army to score their second try. The match went into the final ten minutes with a 4 point game in favor of Navy. 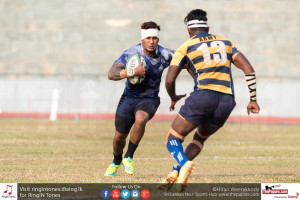 Ranjan Jayaratne of Army SC received a yellow card in the 71st minute making the challenge harder for Army. Navy took the game away in the 73rd minute through another unconverted try by Kosala Thisera. A quick tap was taken inside the 5m and after few phases Kosala found space and went over the line.

Army struck late through a converted try by Vinod Kumar. Army was stuck inside the Navy 22m for a good five minutes. Navy conceded a penalty and Vinod, taking a quick tap, went over the line.

With just a two point difference Army had to strike again from the restart but they couldn’t; conceding a knock on to give away possession and their only chance to steal the win. Navy came out on top by just two points to take the win.

“Really happy with our performance. We played better comparing to our previous matches. Second half was a bit messy but we managed to keep the lead and take the win. Personally I’m happy with my performance as well.”