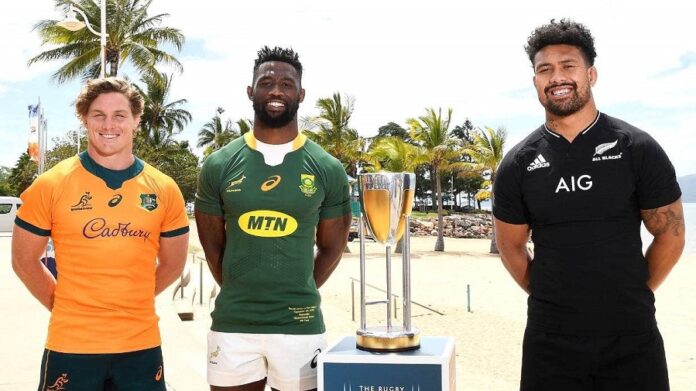 Sanzaar and Rugby Australia have apologised to Argentina for a photo snub that infuriated the Pumas and led to an outburst from their coach Mario Ledesma.

Ledesma, a former assistant coach with the Wallabies, criticised the decision to press on with a Rugby Championship captain’s photoshoot in Townsville last Friday despite the fact Argentina had yet to arrive due to a flight delay.

Sanzaar claims the decision to push ahead with the shoot was so that a photo of New Zealand captain Ardie Savea and Springboks leader Siya Kolisi standing together could be taken ahead of the 100th test between the two nations.

A photo of Wallabies captain Michael Hooper in a First Nations jersey was also taken with the purpose of using it to promote the upcoming game against Argentina, which Australia won 27-8.

But Sanzaar claims there was a communication breakdown when a photograph was taken of the three attending captains minus the Argentina skipper alongside the Rugby Championship trophy.

That photo infuriated Argentina, who have made huge sacrifices during the Covid-19 pandemic to ensure the Rugby Championship could go ahead with four teams.

“We’re always travelling, we never complain but we feel sometimes we’re getting treated with disrespect and we just continue, cop it on the chin,” Ledesma said on Saturday night.

“They made a video, everyone is joking, having a good time and our captain is not there … and nobody said anything.”

Sanzaar and RA released a joint apology on Monday.

“Sanzaar and Rugby Australia take full responsibility for this error and acknowledge that it should not have happened and fully understands Argentina Rugby’s disappointment over this matter after the image appeared in the media,” the statement read.

“Sanzaar would like to publicly state that no disrespect was intended and indeed would like to thank Argentina Rugby for its unselfish and committed contribution to The Rugby Championship, highlighted by the fact that it has played all matches away from home over the last two years.”

Argentina are winless after five games of the Rugby Championship, and will be aiming to turn the tables on Australia when the two teams clash on the Gold Coast this Saturday.