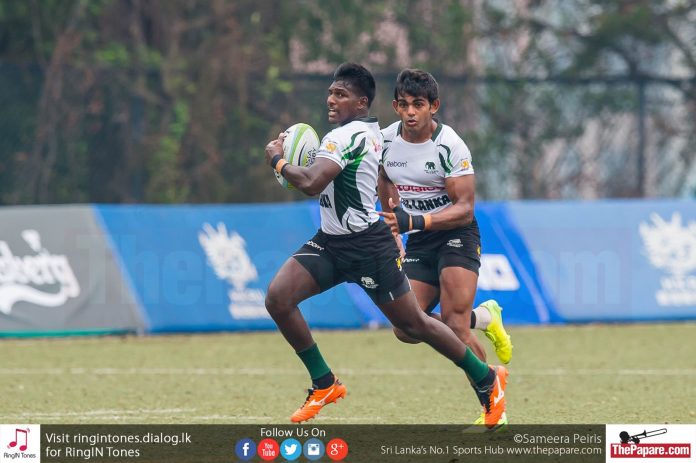 For the first time in 5 years, the Sri Lanka Rugby team has failed to finish in the top 5 positions in the Asian Seven Series, as the team lost out to the Philippines in the 5th/6th play-off 17-19.

After finishing 3rd in the 1st leg in Hong Kong, the team has dropped three positions as they will have to take the 6th place in South Korea with their lackluster performance against the Philippines.

Having led at halftime, the team failed to get their defence aligned out as the Volcanoes emerged triumphantly.

The Philippines started out with a bang with Jonico Hardwick scoring in the very first minute of play.

Fighting back, Srinath Sooriyabandara got through the Philippine defence to bring in the converted try to equalize.

Just before the half-time whistle, Dinuk Amerasinghe came in handy for Reeza Raffaideen’s break in the far corner as he bulldozed the big built Philippines player to the whitewash.

Having the 5-point cushion at the restart, Sri Lanka extended their lead with Kevin Dixon’s footwork giving Sudam Sooriyarachchi space to sprint to the try line. The current CH & FC player, Sooriyarachchi covered almost 70 meters to score the third try for the Tuskers.

Sri Lanka’s woes in the breakdown and defence cost them the match as Vincent Young touched down for the Volcanoes under the posts cleaning out the breakdown.

The Philippines continued their scoring spree and with Sri Lanka giving away penalties in their defensive half, fueling  their motive. Ned Stephenson went on to score an important try that put them in the lead with a minute to go.

With less than a minute to go, the Tuskers tried to spark a last-minute score but with the team gifting possession away, their efforts didn’t fall through as the Volcanoes registered their first ever victory against Sri Lanka in the Asian Sevens Series.

Sri Lanka’s defence proved to be the turning point throughout the tournament and the final was no different. Sri Lanka failed to hold on to possession, were inefficient in the breakdown and were slow in defence.

With two weeks to go for the 3rd leg, a lot will be expected from the side when they play in front of their home crowd in Colombo. 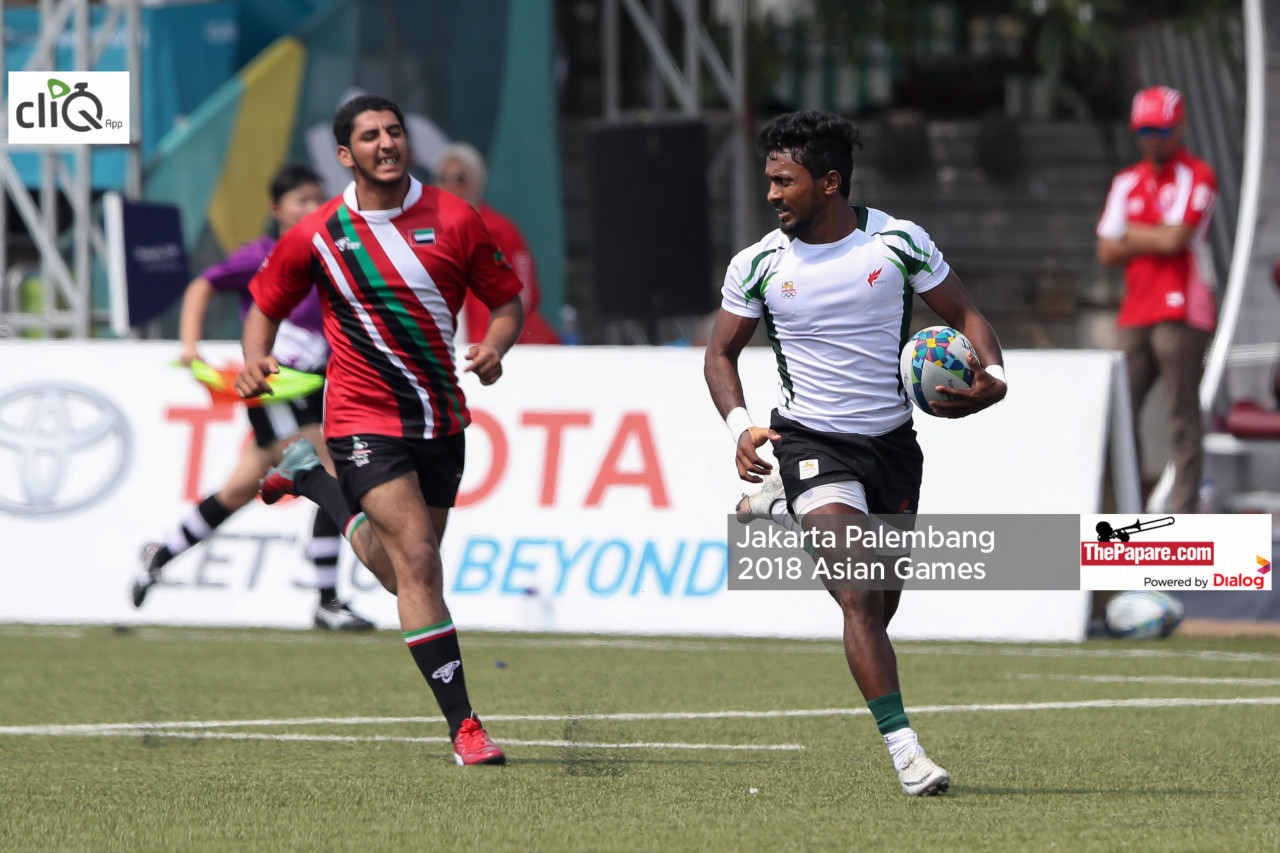 Sri Lanka secure their position in the Plate final as they overcome a fighting Malaysian outfit in the Plate semifinals.

The Malaysians looked a revamped outfit from the 1st leg, where they finished 8th. Sri Lanka was the first to draw blood thanks to the running lines from the skipper Sudarshana Muthuthanthri. Muthuthanthri’s break from the middle found Sudam Sooriyarachchi in support to offload and score the first for Sri Lanka.

Malaysia bounced back right from the restart and with them holding on to possession for a few phases, Hazim Nazhuruddin was over for the equalizer. With the conversion, the Malaysians had the early lead.

Sri Lanka’ poor support play in the first half seemed to be a big problem with players being isolated a majority of the time but they looked to have rectified it coming into the second half.

The Tuskers had the chance of taking the lead just before halftime but poor judgement barred them from doing so.

The message after halftime was clear and Sri Lanka’s control of possession early in the half saw them score thanks to some good support play. Reeza Raffaideen crossed over and Sri Lanka took a slender lead. (10-7)

The Malaysians didn’t take time to respond. A high tackle infringement saw Malaysia taking advantage of the penalty and rushing through the middle was Siddiq Jailil who restored the lead back again. (12-7)

With seconds to go for the full-time whistle, the experienced Srinath Sooriyabandara anchored a breakthrough and with help from Danush Dayan he took Sri Lanka to victory at the brink of full time.

Sri Lanka finished with a 17-12 win but was struggling in the middle throughout the 14 minutes. The defensive effort needs to improve when they play the Plate final later in the day. 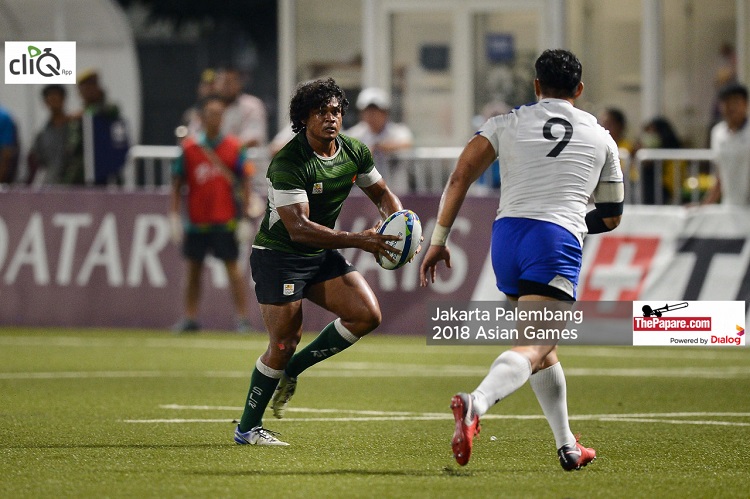 Sri Lanka Rugby’s hopes of making a second cup semifinal faded away in a matter of minutes as hosts Korea secured a 22-14 victory in the final group stage match.

Sri Lanka’s track record and the bad run of form against Korea will continue as the team has lost their 3rd consecutive game against the side following up from the Asian Games last month.

Playing the second leg of the Asia Sevens Series, Sri Lanka won against Chinese Taipei early morning but lost out to Hong Kong. It was a must win against Korea if they were to make a cup semifinal.

Sri Lanka’s infringements in the breakdown gifted the Koreans an early penalty and speedster Jeongmin Jang drew first blood running around the Tuskers.

Replying strongly, Buddhima Piyarathane came out with his sidestepping mantra to score an important score under the post after a few successful phases.

With a two-point lead in hand, Sri Lanka didn’t have any luck in getting hold of possession and a wise over the top kick saw Jin Coquillard collecting it cleanly and scoring the second for the Koreans before halftime.

The three-point deficit seem very achievable but Sri Lanka’s poor set up in defence cost them the game. The Koreans looked dangerous with ball in hand and with ample players in support play, they scored their third as Sungkyun Cha touched down left of the posts.

Sungyun’s try was followed by the speedster Jeongmin Jang who scored his second sprinting his way through the hapless Tuskers.

Sri Lanka’s defence clearly let them down as the Tuskers looked very unsettled during the entire duration of play. Skipper Sudarshana Muthuthanthri scored a consolation score late in the second half but that was not enough to change the game.

After finishing 3rd in Hong Kong, it has been a disappointing performance by the side as they failed to qualify for the cup semifinals. They will play the Plate semifinals and provided they make it to the finals, it will be for the 5th and 6th positions in the series.

Last year the team finished 5th in the 2nd leg in South Korea.