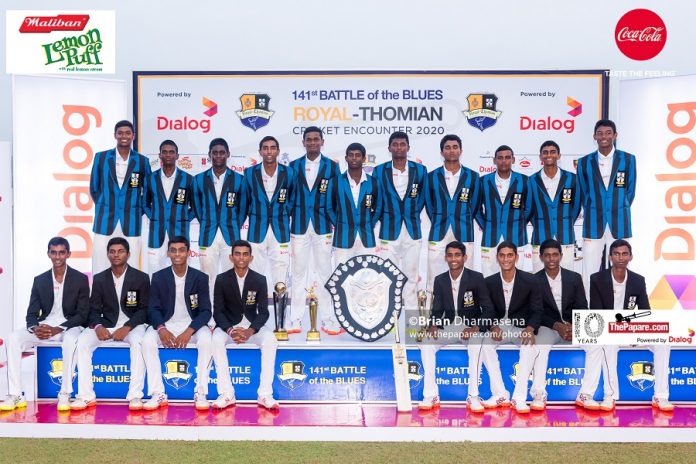 Dasis Manchanayake made an unbeaten 53 to pull Royal College out of deep trouble on day 3 of the 141st Battle of the Blues encounter at the Sinhalese Sports Club grounds. After seeing Royal declare on 282, S Thomas’ finished on 127/5 as the game drew to a close.

Manchanayake, playing in his 1st Royal-Thomian, showed absolutely no nerves in the middle, playing a controlled knock, after coming in to bat with the score on 177/6 – Royal still 43 runs away from avoiding the follow-on. The elegant left-hander put on 24 alongside Isiwara Dissanayake before taking the lead in his partnership with Lahiru Madusanka which was worth 67. Manchanayake and Madusanka weathered the Thomian storm and eventually went past the follow-on mark to post 282/8 before the declaration came from the Royal camp.

De Mel, Fernando star as S. Thomas’ take honours on day 1 of Battle of the Blues

Left-arm pacie Yasiru Rodrigo was the most impressive bowler in a good overall performance from the Thomians on a dead surface. The battle between Rodrigo and Dissanayake was particularly good to watch with the left-armer getting Dissanayake to play and miss outside the off stump on several occasions. He eventually had his man as he snuck one through straight to wrap Dissanayake on the pads. Umayanga Suwaris was another who stood out with the ball, picking up the crucial wickets of Kavindu Pathirathne and Thevindu Senaratne to kick off proceedings while Rodrigo picked up the final wicket to fall in the Royal innings when he had Madushanka, who had restrained himself well during his stay at the crease, caught behind for 29.

Coming in to bat for their 2nd innings with 87 runs in the bank, S Thomas’ surprisingly looked far more aggressive with the bat, with Dilmin Rathnayake and Shalin de Mel using their feet and taking on the bowlers. Their approach brought the ‘School by the Sea’ just 26 runs as Kamil Mishara picked up de Mel for 5.

Gishan Balasooriya, the man who had been Royal’s star performer with the ball during the regular season, was disappointing in the 1st innings but came back to pick up 4/50 in the 2nd, claiming the scalps of Dilmin Rathnayake, Ravindu de Silva, Ryan Fernando and Umayanga Suwaris.

Royal in trouble after late wickets

Fresher Gavin Botheju, who made a half century in the 1st innings, and Kishan Munasinghe saw S Thomas’ through to the end of the day’s play to finish off the 141st Battle of the Blues.

Having won the encounter in 2019, S Thomas’ retained the D S Senanayake Memorial Shield as the game ended in a draw.