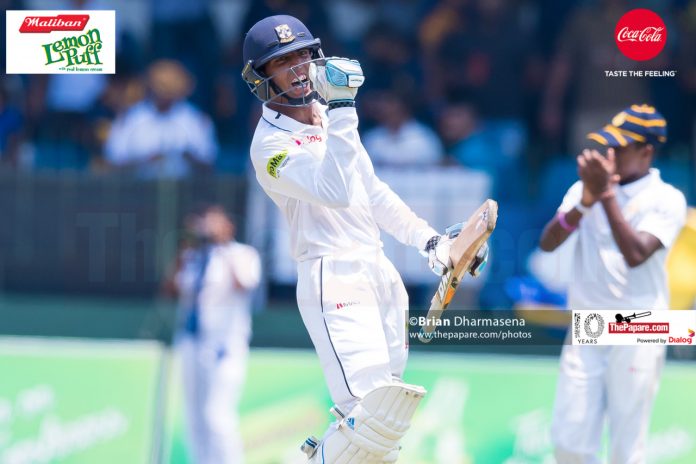 Shalin de Mel (85) and Ryan Fernando (70) propped S. Thomas’ College up on day 1 of the 141st Battle of the Blues encounter as the School by the Sea finished on 271/6 after being sent in to bat by Royal College.

De Mel and opening partner Dilmin Rathnayake survived the all-important first hour of play, despite the best efforts of Kavindu Pathirathne, who got the ball to move early on. The right-arm quick did manage to cause a bit of trouble with the new ball, troubling Rathnayake in particular. Rathnayake was lucky to survive a few streaky shots and was given a life when he was dropped at gully in the 11th over but nevertheless he and his partner de Mel put on a valuable 49-run stand to give S. Thomas’ a steady start.

Pathirathne didn’t receive much support from the other hand, but bowled an excellent, long spell to start things off at the Royal-Thomian and was justly rewarded when he trapped Rathnayake right in front with a full delivery. Ravindu de Silva, the man everyone had been talking about prior to the game, did not last long in the middle, stumped off the bowling of Gishan Balasooriya.

De Mel and Ryan Fernando then put Royal to the sword, putting away the loose deliveries, which the boys from Reid Avenue dished up regularly, and putting S Thomas’ in a commanding position by mid-day. De Mel was just beginning to get into his stride but fell agonizingly close to what would have been an excellent century, top edging a delivery from Royal skipper Senaratne to fall for 85. Kishan Munasinghe was sent in ahead of both Umayanga Suwaris and Gavin Botheju but had no answer to a quicker delivery from Kamil Mishara, bowled for a duck to put the game back in the balance. Mishara, who is known more for his batting and his work behind the stumps, was utilized well by Royal, as he tied up one end with Fernando and Botheju at the crease.

With Royal’s two frontline spinners Balasooriya and Prashan Kalhara going for runs, skipper Senaratne was forced to use himself as well as the likes of Mishara and Dasis Manchanayake extensively. Manchanayake got the crucial breakthrough when he trapped the well set Ryan fernando right in front of the stumps. Umayanga Suwaris, who was looking good in the middle, was sent back by Lahiru Madushanka in the third session before fresher Gavin Botheju and Manisha Rupasinghe dug in to take the Thomians through to stumps.

Royal did have their chances in the field throughout the day, with three catches going down in the slip cordon and Mishara missing an easy opportunity to run Fernando out at the non-striker’s end in the 2nd session. Despite this, they did put on a good show with their ground fielding and put on a far more disciplined performance in the 3rd session of play to dry up the runs. Pathirathne was no doubt the star with the ball for Royal, his figures of 1/60 not really reflecting how well he bowled throughout the day.

The Thomians did finish the day slightly ahead of Royal, but with 6 wickets already back in the hut, the latter will look to clean up the rest of the Thomian batting line-up as early as possible on day 2.

As always, you can catch the LIVE action of the 141st Battle of the Blues on ThePapare.com and Dialog TV from 9 am onwards on the 13th and 14th of March.