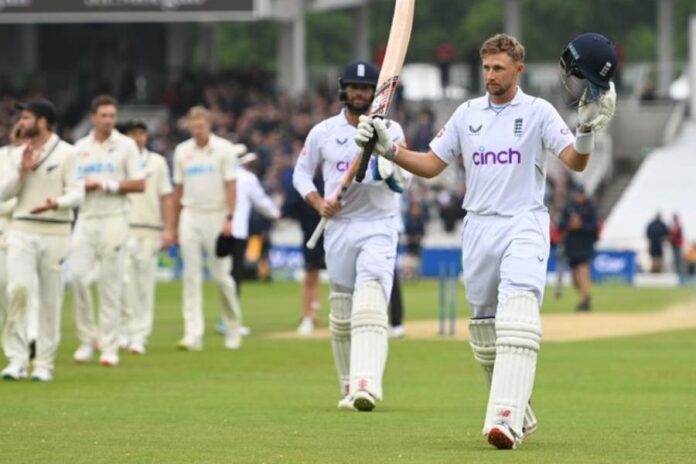 England couldn’t have asked for a better start under the new Test leadership of Ben Stokes and Brendon McCullum as they registered a fighting win over New Zealand in the first Test at Lord’s.

The win lifts England from the bottom of the World Test Championship standings, leapfrogging Bangladesh to 8th with a point percentage of 19.23. Defending Champions New Zealand are in a spot of bother at 7th, with a 33.33 point percentage.

Lord’s wore a gloomy look on Sunday morning, thanks to overnight rains in London. However, the thick cloud cover over the head did not stop the action from starting on time, with floodlights operating from the very beginning of the day.

Joe Root and Ben Foakes continued where they had left off the day before. Though the boundaries were few and far between initially, the pair ran hard between the wickets to keep chipping at the 61 runs required at the start of the day.

Foakes was the more aggressive of the two on the day while Root was cautious as he neared a double-milestone. Before Root got to his triple digits, the pair celebrated their 100-run partnership.

Batting on 98, Root nudged the ball to deep square to the familiar sound of “Roooooot” from the stands. With the brace, he brought up his 26th Test century and also got to 10,000 Test runs.

He equalled the record for the youngest player to achieve this feat – a milestone he now shares with fellow countryman Alastair Cook, who was only 31 years and 157 days old when he reached the 10k club.

Former captain kicks off new era with a win

With the burden of captaincy off his shoulders, Root looked way more at ease while batting. Once he got to his milestone, he was in a hurry to finish the game off.

He smashed Southee for three boundaries in an over to take England over the line with five wickets in hand – something that looked improbable when they were 69/4 in the second innings.

Foakes let Root walk off to the applause of the Lord’s but the wicketkeeper-batter played his role to perfection after walking in at the fall of Stokes’ wicket at 159/4. This is England’s second-highest run-chase at Lord’s in Tests.

The tale of the Test

The first day of the Test was as eventful as they get with 17 wickets falling. The veteran duo of Stuart Broad and James Anderson made an immediate impact upon their return by sending the three of the top four in the opening exchange. Matthew Potts had a dream debut with the ball, securing a four-for that included the prized scalp of Williamson.

Anderson picked up four wickets to reduce New Zealand to 132 all out, which would have been a lot worse without Colin de Grandhomme’s 42 and Tim Southee’s 26.

England’s were cruising along with openers Alex Lees and Zack Crawley putting on an opening stand of 59. However, the wicket of Root opened the floodgates the Kiwi pace trio ran through the middle-order to restrict the hosts to 116/7.

It didn’t take long on day two to wrap up the innings, with England taking a slender lead of 9 runs. The bowlers continued to make merry as the New Zealand top-order once again crumbled before Daryl Mitchell and Tom Blundell held fort. The duo added 180 runs before stumps on day two, and were both batting in their nineties heading into day three.

Mitchell got to his milestone in the very first over of day three but Blundell wasn’t as lucky. In an over of madness, the tide turned towards England. Broad broke the fifth-wicket stand of 195 by scalping Mitchell. A napping de Grandhomme was run-out the very next ball before Broad produced a peach to dismiss Jamieson. All in a span of just three balls.

Blundell fell four short of a century and Kiwis eventually bundled for 285, setting England a target of 277.

Jamieson ran riot with the new ball and England were on the verge of a collapse at 69/4 before the captain and the former captain came together to add 90 for the fifth wicket.

Though Stokes fell after his fifty, Root went on to score a century and together with Foakes, guided England to a memorable win at Lord’s.