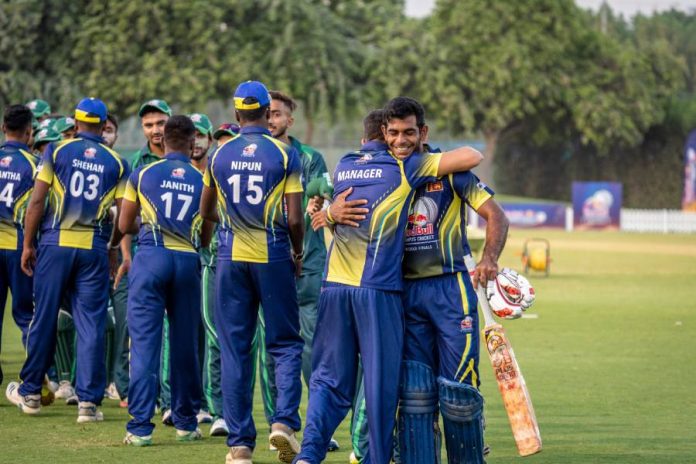 ICBT Campus, Sri Lankan representative in the Red Bull Campus Cricket World Finals in Dubai have advanced to the play-offs of the tournament after winning both their games in the first-round.

Sri Lanka, who contests in group ‘B’ played their first game against Pakistan. 3 teams are slotted in to group ‘B’ including Sri Lanka with the other being the host nation, UAE. Group ‘A’ is made up of South Africa, India, England and Bangladesh.

Sri Lanka won their first game with ease against Pakistan by 7 wickets at the ICC academy grounds in Dubai. Skipper Salinda Ushan won the toss and elected to bowl first in the game. They restricted Pakistan to 151 runs. Anuk Fernando was the pick of the bowlers as he picked up 2 wickets including a wicket in the energizer over.

The batting was held by the star of the team, Priyamal Perera who smashed 52 runs unbeaten while Himasha Liyanage produced a cracking 28-ball 51 to snatch the Player of the Match award away.

The second assignment for the Lankans was against UAE against whom they registered a 66-run victory.

The hosts were not given much room to work with in the batting as the Sri Lankans saw them off comfortably, giving away only 109 runs and picking up 9 wickets. Off-spinner Ayana Siriwardena bowled exceptionally well as he went off with brilliant figures of 4 for 21 in his 4 overs.

Sri Lanka will now move forward into the play-offs as group toppers and will play against South Africa on the 1st of November.

Stay tuned to ThePapare.com for more updates on this tournament.