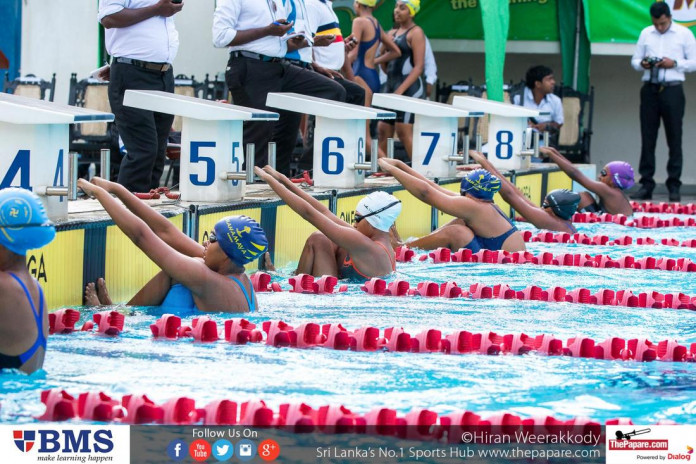 A total of ten records were renewed during the second day of the Sri Lanka Schools’ Swimming Championships at the Sugathadasa Swimming Complex yesterday (24th).

The 16-year-old Hiruni Perera who hails from Harischandra College in Negombo won the Girls Under 17 200m Individual Medley with a record timing of 2:38.45; finishing in second place was Uththama Silva of Mahamaya College with a timing of 2:39.10. Perera renewed the record set by Hiruni De Zoysa last year which was a timing of 2:41.51.

Joes and Mahamaya out to retain All Island Swimming title

The other record she claimed ownership to came in the Under 17 Girls’ 100m Butterfly Stroke event clocking at 1:08.64 refreshing Hiruni De Zoysa’s record of 1:10.58. 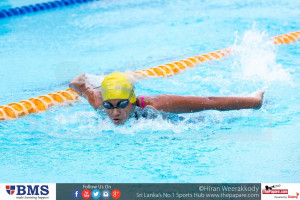 Coming up the ranks, Nalandian Dilanka Shehan got two records under his name when he won the Under 17 100m Freestyle event and the 800m Freestyle. Shehan clocked in 55.00 seconds shaving 2 milliseconds off the previous record that was at 55.02. In the 800m Freestyle, Shehan broke Trinitian Migara Hulangamuwa’s record of 9:18.88 by finishing the race in 9:15.98 minutes.

Shaleena Peiris of Visakha VIdyalaya finished her Under 19 200m Individual Medley event with a timing of 2:45.87 minutes setting a new schools record. Dileka Gunawardena of Ladies’ College came in at second place in the event and coming in third was Sashi Weerawarna also from Ladies’ College.

The Under 17 100m Freestyle record that was set by Machiko Raheem three years back was broken by the 16-year-old Dilrukshi Perera of Hillwood College Kandy who finished the event in 1:03.32 minutes. Dilrukshi got herself to the record books by coming in 0.2 seconds ahead of Raheem’s timing that was at 1:03.34. Shehanthi Gunawardena and Sandu Savindi took the second and third places in the event respectively.

Stephan Perera of Gateway College Colombo broke Matthew Abeysinge’s record in the Boys’ Under 15 Freestyle event with a timing of 54.24; the earlier record stood at 56.4 seconds. 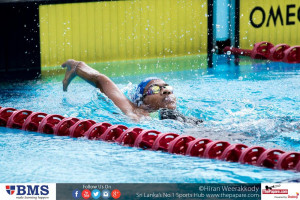 The other records that were broken were in the Under 19 Girls 100m Backstroke event where Vinoli Siriwardena of Mahamaya College Kandy finished with a timing of 1:13.47 minutes and Vinoli Kaluarachchi of Srimavo Bandaranayaka College claimed the Under 17 Girls 100 Backstroke event record with a time of 1:08.42 minutes.
The final record for the day came from the Ratnapura district where Ushan Gunarathana from Lyceum International School Ratnapura broke Imesh Chaturanga’s record in the Under 17 100m Butterfly event with a timing of 59.79 seconds. The earlier record was at 59.93 seconds.

The events are set to resume today at 9.30 a.m. at the Sugathadasa Swimming Pool Complex with the preliminaries for the relay events.