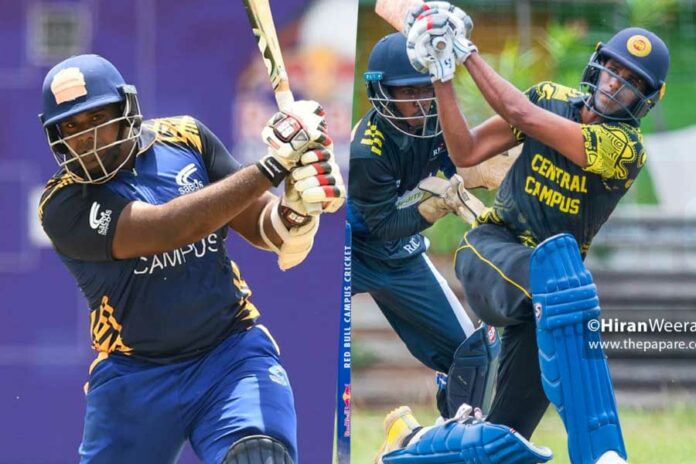 In the three quarter-final games of the Red Bull Campus Cricket 2021 that were played today, 12th March, Sri Lanka Institute of Marketing, Imperial College of Business Studies and Central Campus Colombo emerged winners and qualified for the semifinals.

Sri Lanka youth cap Navod Paranavithana set the day on fire with a fierce 52 runs giving the Central Campus of Colombo (CCC) a good start. Another star with the bat in today’s play came from Saegis Campus, as Sachitha Jayathilaka struck a destructive 63 runs and remained unbeaten.

It was a good day in the office for Jayathilaka as the former S. Thomas’ old boy picked a fifer with the ball as well.

No other batsman put up a show today except for Paranavithana and Jayathilaka as the other two games were low-scoring encounters.

On the bowling front, behind Sachitha was the Imperial College left-arm spinner, Ayesh Harshana who bagged 4 wickets to his name including two of them in the Energizer over.

Esoft Metro Campus was given a walkover to the semifinals as ICBT withdrew from the tournament.

The four teams will face off in the semi-finals tomorrow, 13th March, at BRC grounds. Log-in to ThePapare.com to catch the live action of both matches from 8.45 pm onwards