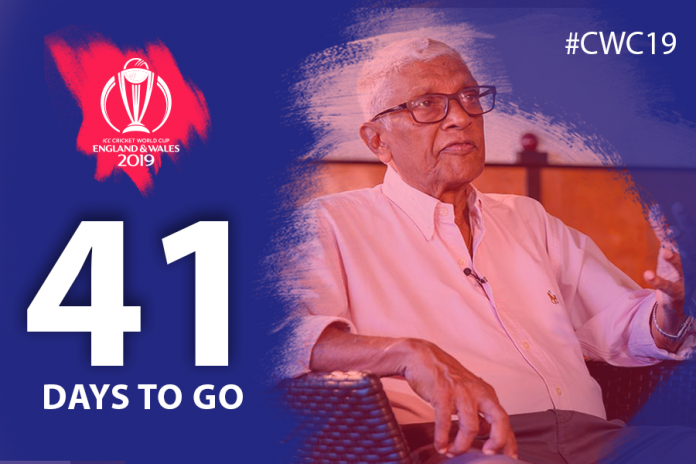 The first time the World Cup moved out of England was in 1987. With India and Pakistan co-hosting the event, Sri Lanka were expected to do well in conditions familiar to them. But it was a disastrous campaign.

Duleep Mendis’ side played six games and lost all six. To date, it remains Sri Lanka’s worst World Cup campaign. Apart from losing the opening match to Pakistan by 15 runs, Sri Lanka were handed heavy defeats in the rest of the games. This included the 191-run loss to the West Indies when Sir Viv Richards gave them a cricketing lesson, smashing a stunning 181 off just 125 deliveries.

After the competition, heads rolled and some players never represented Sri Lanka again. One of the areas that authorities identified that needed urgent attention was the below par fielding standards.

Each day the players would work flat out on their fielding with sessions running for 30 to 45 minutes. Arjuna Ranatunga in his Legends interview told us that the players were not too complementary about tough fielding sessions that they had to go through but no one could argue with the fact that it was helping the team raise the standards remarkably.

The results were stunning. Sri Lanka had emerged as the best fielding unit among the Asian countries when they attended the 1992 World Cup. The likes of Sanath Jayasuriya, Roshan Mahanama and Ruwan Kalpage were electric on the field and pulled off some stunning catches during that competition.

By 1996, Sri Lanka had taken fielding to another level. They were only behind South Africa, who were the best fielding unit in the world at that point. A young Upul Chandana was exciting to watch. The leg-spinner didn’t play a single game during that campaign but frequented the field as the 12th man and the energy he showed on the field made people take notice. Throughout Sri Lanka’s successful campaign in 1996, their fielding stood out, with half chances being taken. The Sri Lankans were a testimony to Clive Lloyd’s legendary words, ‘catches win matches’.

Knowing pretty well that their bowling wasn’t world class, the team management demanded that the players be sharp on the field to compensate for the bowling deficiencies. The players responded brilliantly and to see the Sri Lankans put opposition teams under pressure was a treat to watch.

Sri Lankans used to take pride about their superior fielding skills. Over the years, specialist fielding coaches like Trevor Chappell, Trevor Penny, Paul Farbrace and Nic Pothas have been employed by Sri Lanka Cricket to work on the team’s fielding.  Currently, tough talking Steve Rixon is in charge.

It seems that at present other sub-continent teams like Bangladesh, India and Pakistan have taken their fielding to the next level. Sri Lanka seem to be struggling, with too many injuries not helping them.

Rixon is not going to go down without a fight though. Hastily recruited in December last year, he has been doing a lot of work in helping the team raise its fielding standards.

One of the first things that Mickey Arthur did after being appointed Pakistan Head Coach was to rope in Rixon as Fielding Coach. The results were stunning. By the time Pakistan won the Champions Trophy in 2017, they had effected more run outs than any other international team in ODI cricket through direct hits in a 12 month period. With Rixon around, Sri Lankans can dream big too.