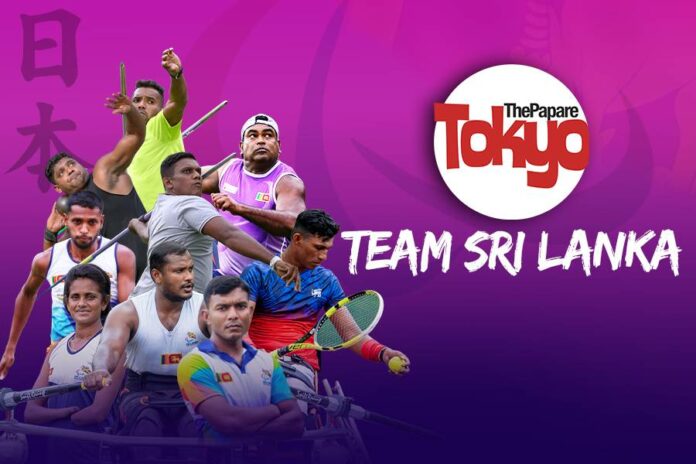 Team Sri Lanka will participate at the Paralympics 2020 in Tokyo, Japan in the hopes of securing at least a third consecutive medal in the biggest stage of them all, after Pradeep Sanjaya (2012) and Dinesh Priyantha Herath (2016) won Bronze in the 400m(T46) and Javelin Throw(F46) during London 2012 and Rio 2016 respectively. 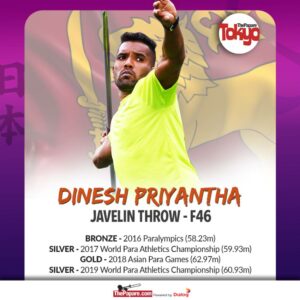 Dinesh Priyantha will be the Team Captain for Paralympics 2020. Following his heroics at Rio 2016, his aim is to become the first Sri Lankan athlete to have won two global medals at the Paralympics. He joined the Sri Lanka Army Gajaba Regiment in 2004 and was injured in December 2008 in Kilinochchi after taking three bullets to his left arm. 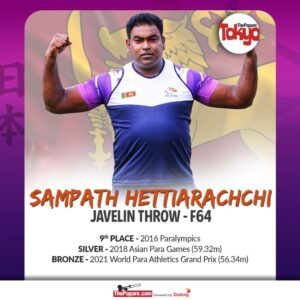 This will be Sampath Hettiarachchi’s 2nd Paralympics after having placed 9th (F44) in the 2016 edition in Rio. Hettiarachchi was affiliated to the Sri Lanka Army Wijayabahu Infantry Regiment when he lost his left leg to a mine back in 2008.

Just two years later in 2010, he joined Para Athletics and the last few years have been fruitful for him. He won a Silver in the 2018 Asian Para Games and a Bronze in the 2021 World Para Athletics Grand Prix. His personal best is 62.11m.

Sampath Bandara is one of three Sri Lankans Para-Athlete to be making his 2nd appearance at the Paralympics in Tokyo. He was placed 13th in the 2016 edition with a score of 613. His personal best of 628 (632 Asian Record) came in 2020 in the Paralympic Asian Selection Trials held in Thailand where he took Gold. Interestingly he is even ranked in the top 8 overall (non-para) in the country. 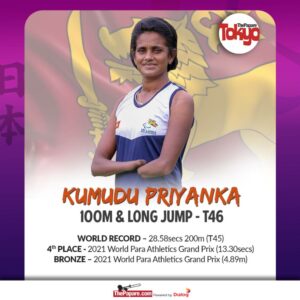 Making her first appearance in the Paralympics, the story of Kumudu Priyanka, as with any other in her team, is of pure grit and determination. She lost both her arms and went partially blind in her left eye when she unknowingly picked up a grenade in a her backyard, which blew up in her hand. This was in 2005 while she was awaiting her GCE O/L results.

But within a year of that unfortunate incident, she was taking part in Para Athletics. Just 4 years later, she was a World Record holder, a record that still stands, when she ran a 28.58secs in the 200m (T45). Unfortunately, she had to give up the 200m event when she went completely blinded in her left eye, making it difficult to take the bend in the event.

Currently an employee at MAS Holdings, Kumudu won the Bronze in the Long Jump at the 2021 World Para Athletics Grand Prix and was placed 4th in the 100m at the same championship. 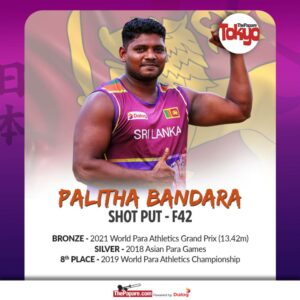 Born and bred in Matale, Palitha Bandara was a good volleyball player during his school days. After joining the Army in 2009 he continued playing volleyball but his career was cut-short because of a leg injury in 2013.

Towards the end of 2014 he took up Para-Athletics and up until 2017 he didn’t have a coach. He taught himself through the internet. In 2018 he won the Silver at the Asian Para Games and was placed 8th at the 2019 World Para Athletic Championship. Bandara won the Bronze at the 2021 World Para Athletics Grand Prix and is ranked in the Top 6 in the world for the year 2021. 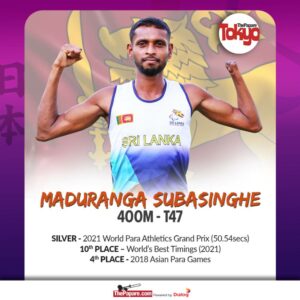 Maduranga joined the Navy in 2008 and in 2009 he was injured by a hand-grenade during the war. This caused an amputation of his left hand – wrist down. He was introduced to Para-Athletics in 2016.

In the 2018 Asian Para Games he was placed 4th and won Silver at the 2021 World Para Athletics Grand Prix. He is currently ranked in 10th amongst the World’s Best timings for the year 2021. 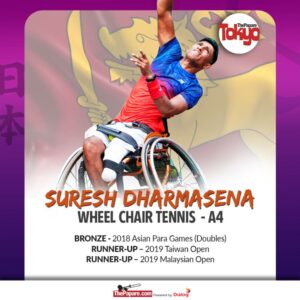 Hailing from Anuradhapura, Suresh Dharmasena is another volleyball player who excelled at school level coming into the final stages of the All Island Schools tournaments. He joined the Army in 2007 and was affiliated to the 11th Regiment of Sri Lanka Artillery. In February 2009 he lost his left leg from a mine explosion in Puthukudiyiruppu.

When he took up Wheelchair Tennis in 2010 he hadn’t even heard of a sport called Tennis. Learning the game and overcoming obstacles he has gone onto represent Sri Lanka and win in many international tournaments. He won the 2018 Asian Para Games Bronze in Doubles and was runner-up in the 2019 Taiwan Open and the 2019 Malaysian Open. 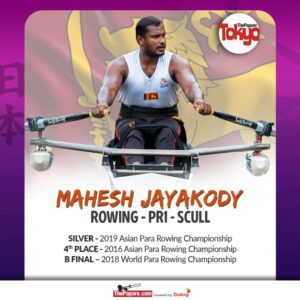 His desire to become a soldier saw Mahesh Jayakody joining the Army, soon after his O/L’s, in 2007 as a member of the Special Forces (one of the Elite Forces in the Sri Lanka Army). Back in 2009 during the final stages of the war, a bullet to the spine saw him paralyzed below the waist. 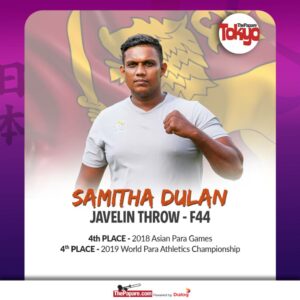 Samitha represented his school in the Javelin Throw in the All-Island level. He joined the Army in 2009 with the purpose of pursuing sports but unfortunately he was involved in a vehicle-accident and was treated for a leg injury for two years.

After joining Para-Athletics in 2018, he has gone on to be placed 4th in the 2018 Asian Para Games and 4th in the 2019 World Para Athletic Championship.