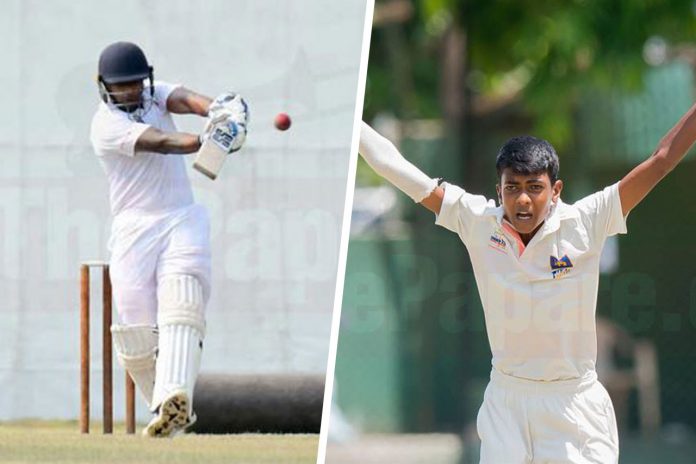 Five matches of the SLC Premier League Tier ‘B’ tournament commenced today. Akeel Inham excelled with a century, while the 21 year-old debutant from SCAC Naveen Gunawardena starred with the ball.

Put into bat first, the boys from Kandy lost two quick wickets to the likes of Rajinda Punchihewa and were struggling at 2 for 5, when the 23 year-old right-hander Akeel Inham joined forces with Ian Dev Singh to pile up a massive 143 run partnership for the 3rd wicket, steadying the ship. Inham scored a brilliant 148 and was rightly supported by Singh, who made 79. Sasith Manuranga , Sachithra Perera and Sampath Perera chipped in with half centuries to help the visitors post a commanding score of 443 for the loss of 9 wickets .

In reply, KTC were 6 for the loss of 1 wicket when the umpires called it a day at Welisara .

Batting first, Galle CC was bundled out for 175 runs in 69.2 overs . Ravishka Wijesiri top-scored for the boys from the south with 48 runs . Umesh Karunaratne picked up 4 wickets for the hosts .

The boys from Panadura were struggling at 32 for 3 when play stopped for Day 1.

Asked to bat first, NSWC were in the driving seat at the end of the first day’s play as the former under 19 cap Pathum Madushanka struck an unbeaten 84. He was supported by left-hander Pramud Hettiwatte (61)* as the pair added an unbeaten 108 runs for the 3rd wicket.

Having lost the toss, the hosts took the first lease of the wicket. However, none of the batsmen were able to make a mark as they were bundled out for a below par score of 153.

Debutant Naveen Gunawardena was the man in charge with the ball as he picked up 6 wickets for 57 runs with his slow left arm orthodox to rattle the Navy line up .

In reply, half of the SCAC line up was run over by the left-arm spin of 23-year old Dilanka Sandakan. They were 133 for 5 at the close of play, only trailing their opponents by 20 runs.

SLPACC were in control when play ended for Day 1, having scored 231 for 4 in 70 overs. Ramesh NImantha top-scored for them with 62 runs off 150 balls. The right-hander from Pakistan Hasnain Bokhari remained unbeaten on 54 .