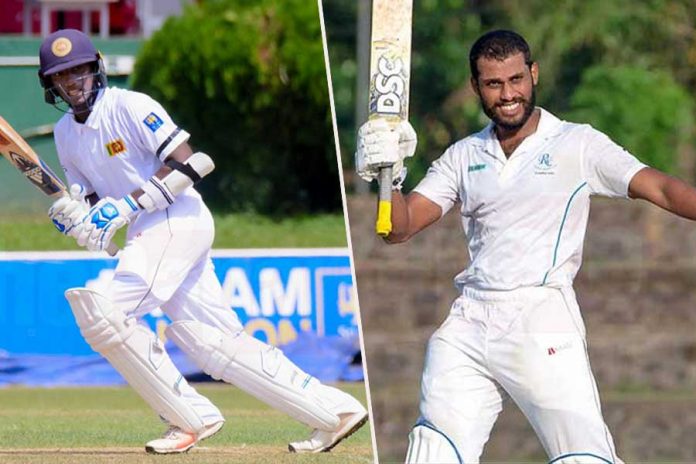 Six matches of Tier A of the SLC Major League Tournament were played today, while six more matches in Tier B were played as well. Roshen Silva and Nishan Madhushka put on a scintillating batting performance when the duo went on to score 165 and 154 respectively against a strong Lankan CC bowling attack.

After bowling out Lankan CC for just 205 runs, Ragama CC were in a spot of bother as they were 4 down for just 84 runs. Roshen Silva and Nishan Madhushka, who paired up for the 5th wicket, put on a massive 296-run partnership to see Ragama off the deep end and into comfortable grounds. Roshen Silva, who is eyeing a comeback into the SL side, put all the class and elegance he possessed on display through his 165, while young wicket-keeper batsman Nishan Madhushka showed a lot of character and grit in his 154 runs. Ragama were 417/6 at the end of day 2.

On the back of valuable fifties from Dinesh Chandimal, Lakshan Edirisinghe, Ashan Randika and Dushan Vimukthi, Army were able to make 374 for their first inning. Yasodha Mendis’ brilliant figures of 7/18 enabled the Army men to restrict Moors SC for just 128 runs in their first inning and were asked to follow on. Skipper Pabasara Waduge (58*), who lead the Moors’ batting from the front, was able to put on a much better batting performance in their second inning as they were 107/2 at stumps on day 2.

Read more : A handful of Tons, A double ton & wins for Panadura & Bloomfield

An evenly poised match between Burgher Recreation Club and Negombo Cricket Club saw BRC post a competitive 328 for the first inning against the 279, which was then posted by Negombo CC in reply. Skipper Shanuka Dulaj (68) impressed with the bat for BRC, while Angelo Jayasinghe struck 109 runs for Negombo. It was Upul Indrasiri who starred with the ball for Negombo as the left-arm spinner claimed 7 wickets in the first inning, while Lisula Lakshan picked 4 wickets for BRC. BRC were 35/1 in their second inning when stumps were drawn for day 2.

Prolific young talent Pathum Nissanka’s flawless century was cut short as the match had to be stopped halfway since the umpires decided that the surface was quite dangerous for play due to uneven bounce. NCC were 187/2 with Pathum Nissanka and Upul Tharanga (44*) stitching a calm 90-run stand for the 3rd wicket.

After a modest batting performance saw Saracens SC bowled out for just 176 runs for their first inning, the Chilaw Marians put on a much better batting performance to post 281 runs for their first inning. Sri Lanka National Cap Oshada Fernando top-scored with 69 runs for Chilaw. Nimesh Vimukthi picked up 4 wickets for Chilaw, while left-arm seamer Mohomad Dilshad claimed 4 wickets for Saracens. Batting their second inning, Saracens were 35 for 1 at stumps at day 2.

Yet another even battle between bat and ball was played out at CCC grounds where the home team Colombo Cricket Club took on Colts Cricket Club. After former youth Sri Lanka Cap Santhush Gunathilaka (67) helped Colts CC to make 205 in their first inning, Colombo CC bettered their performance by piling up 244 runs for the first inning. Wicket-keeper batsman Minod Bhanuka missed out on a century by the slightest of margins as he was dismissed for 99 runs. Another former Youth National Cap, Sonal Dinusha, claimed 6 wickets with the ball for Colombo Cricket Club, while veteran spinner Dilruwan Perera claimed 5 wickets to his name.

Vishad Randika, who was caught in the 40s in the first inning, completed his fifty in the second inning when he made 73 runs while Sonal Dinusha picked a double five-fer in both innings. Colts CC were 212 for 8 in their second inning at stumps day 2.