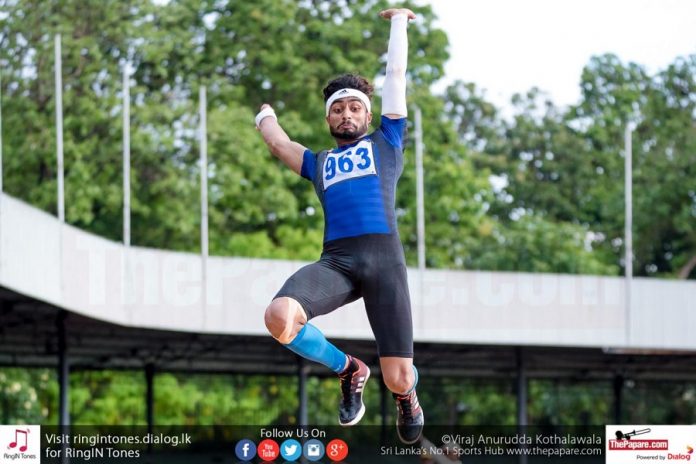 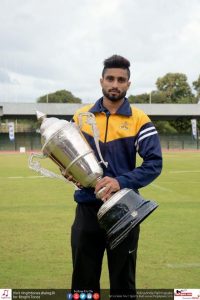 Long Jumper Prasad Wimalasiri, who was Sri Lanka’s long jump representation at the Gold Coast Commonwealth Games earlier this year, was the big winner at the Nationals, bagging three challenge trophies for his new meet record leap of 8.14m in the long jump final. Prasad won the N.M. Vasagam Challenge Trophy awarded for the best performance in a jumping event by a male athlete, the Wilton Bartleet Challenge Trophy awarded for the performance considered the best in the Men’s category and the N. Vyravanathan Memorial Challenge Cup awarded to the athlete whose performance in any individual event is considered the best at the meet in both Men’s & Women’s Categories.

Having leapt to his personal best distance of 8.10m at the final national trial for the Asian Games which was held in May this year, which incidentally was the best performance this year by any Sri Lankan long-jumper, Prasad came into the nationals as the favorite to take the top spot. However, with the likes of national record holder Amila Jayasiri, Danushka Piyarathne, who impressed in the final national trial and Junior national record holder Greshan Dananjaya all in good form, Prasad had to put in a superlative performance to clinch the national title for the year 2018. 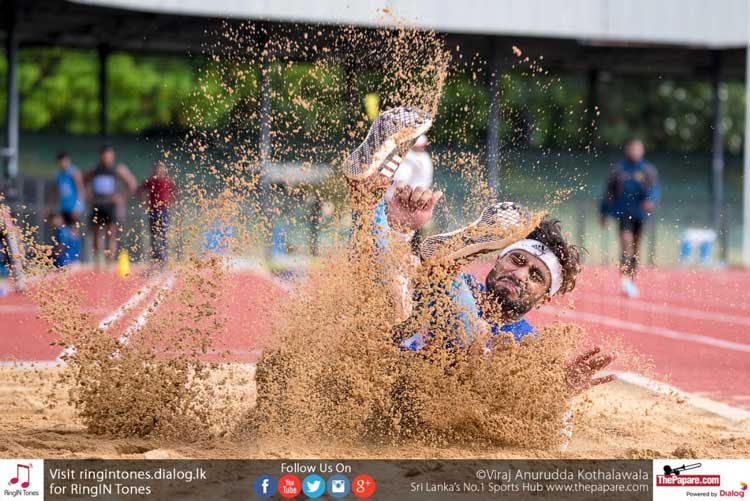 The long jump final at the 96th Nationals was fiercely contested and was a treat to watch. Three long jumpers – H G Sampath, Amila Jayasiri and Prasad Wimalasiri battled against each other to finish on top of the table in the final round of the event. Amila, who recorded three 8m+ leaps, looked to be in the driving seat to take the victory with the other two not breaching the 8m mark. However, in the last round of jumps H G Sampath came out with a screamer, leaping 8.12m to take the top spot.

Prasad, the pre-event favourite, was sitting in 3rd position at this point, unable to breach the 8m mark and one foul jump registered already. Despite the pressure, Prasad came out with an astonishing personal best jump measured at 8.14m, a mere 0.01m short of the National record of 8.15m which was established by Amila Jayasiri in 2016 at the Defense Services Meet, to take the field by storm and seal the title.

Danushka Piyarathna was placed 4th with a best jump of 7.85m while the junior national record holder Greshan Dananjaya also breached the 7.80m mark with a best jump of 7.82m with 6th place MIM Mifran finishing with a best of 7.65m. This was a fiercely contested final where the top jumpers of the country came out and made a statement, getting everyone to stop and take notice.

The Chinese athletes who occupy the 4 spots above Prasad when it comes to this season’s best performances, will be his main competition at the Asian Games.  Olympian Jianan Wang of China will be the favorite for Gold, having recorded a monster jump of 8.47m (+0.7 wind) at the Chinese National Championship in June this year. Asian indoor Champion Yuhhao Shi also of China will look to challenge Wang having recorded the second best for an Asian this year at the Shanghai IAAF Diamond League where he won Silver.  It will be a toss-up between Yaoguang Zhang and Changzhou Huang as only three athletes from a country will be allowed for an event and if we are to go with the most recent performance Prasad will have to make sure he performs better than Zhang who was the winner at the Asian Games invitational test event which was held in February.

Prasad has now cemented his place in the Asian Games squad while it is reported that the Athletic Association of Sri Lanka have requested for Amila Jayasiri to be included in place of K D S Piyarathne who was initially picked as a result of his performances at the 96th nationals.

Prasad’s 8.14m places him in 5th place in the Asian Rankings this. If Prasad can push himself to go beyond his personal best and land in the 8.20m – 8.30m range, he will have an opportunity to clinch a medal at Asian Games 2018, while also claiming the national record.

Malinga wants to retire with Kulasekara – Farewell or Reunion?