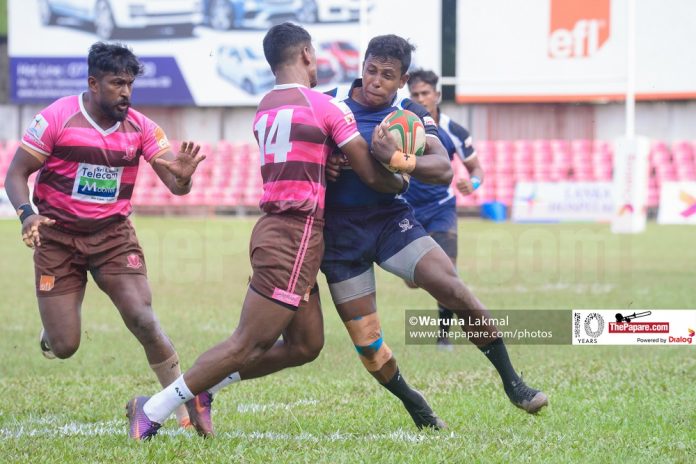 Police SC made a surprise comeback from last week’s defeat as they came out as victors against last year’s runners up Havelocks, beating them by 36 points to 24 in a Dialog Rugby League Week 2 game. The match was played at the Havelocks grounds and Police led 26-03 at half time.

The day was dry but under muddy underground conditions, play commenced at 3.50 p.m with Police fly half Yohan Peiris kicking off proceedings. Police were playing some fast, open rugby from the start but only managed to move from side to side. A yellow card for Havies prop Charana Chamikara, who was guilty of an unnecessary shove, only paved the way for the cops to draw first blood. Finally, it was Emosi Vunivosa who scored beside the post after foxing his way through after the slow build up by Police. Fly half Peiris added the easy 2 points. (07-00)

Another brilliant passage of play by Police rattled the defence of Havies and it was Kasun Suranga who managed to sneak through towards the try line. Peiris missed the conversion from a difficult angle (12-00). Havies had a breather as they won a penalty in the opposition 22 and Prince Chamara opened their account with three points. (12-03)

Not only did Havies seem to have woken up from the wrong side of the bed but they were also on the wrong side of the scoring sheet as Police scored their 3rd and 4th tries within a span of 2 minutes. Both tries were scored under the post as Vunivosa set up Janith Chanaka for the first try and minutes later, makeshift captain Iroshan Silva made some yards and offloaded to his younger brother Sachith Silva. Janith Chandimal converted both with ease and Havies were in deep trouble at half time.

Despite the head start from the first half, Police were in a trouble as they conceded a try and went down to 14 men in the 43rd minute. The powerful Havies scrum was brought down twice but Shawket Lahir wriggled his way through to score the first try for Havies. Prince Chamara added the 2 points and Havies had a lot of catching up to do to close the deficit. (26-10)

Havies made their second kill when their heavy forwards made the yards and Abdullah Faiz scored from the pick and go. Prince Chamara’s conversion closed the deficit to just 9. (26-17)

After a lot of scrappy play in the line outs, Police finally managed to put some points on the board after keeping the ball in possession for a really long time when Kasun Suranga took the quick tap and stepped his way under the posts. Chandimal added the extra points and Police were almost out of reach. (33 – 17)

Police were awarded another penalty and kicked for 3 additional points off the boot of Chanaka Chandimal but Havies with their do or die attitude weren’t willing to give up just yet. Keshan Kavinda the replacement winger scorched his way in the right corner in the extra time after a number of penalties and Chamara added the extra points for the consolation try. The Pink Army were disarmed in their own park and Police have made a statement to the other clubs with this win.