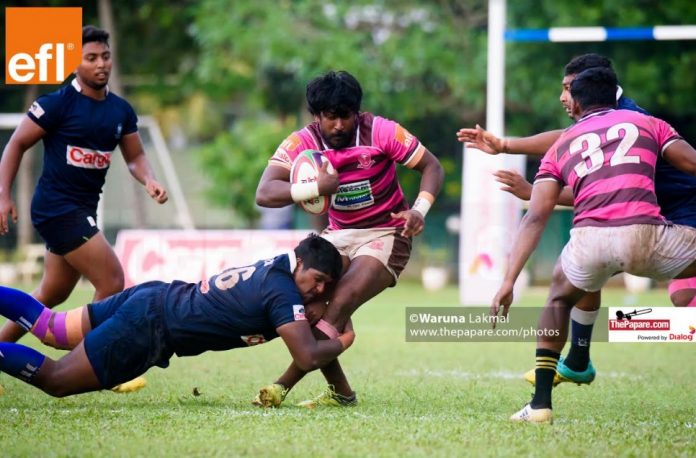 Havelock SC managed to remain unbeaten in the Dialog Rugby League as they beat Police 31 – 26 in their own den earlier this evening. It was a close fought battle as Police were ahead at the end of the 1st half, 14-00. However, a late surge in the final half of the game saw the Park club boys score five tries in quick succession, securing a bonus point win in their 4th week encounter.


It was a gloomy evening at Police Park as Havelock Skipper, Niroshan Fernando, kick-started the game from right to left.

The action began in the 18th minute when Lahiru Pavithra opened the scoring for the home team after crashing through the Havies’ defense line from 5m away. Sachith Silva added the extra two, giving Police an early lead. Continuing with the momentum, Iroshan Silva scored probably the try of the day after the former Zahira Skipper, Shifaz Amath chipped a kick back inside the Havelock red zone to find  #8 Wageesha Weerasinghe, who recollected the ball and offloaded it into the hands of Silva who sliced through the gap and went under the post. That was it for the first half as Havelock stood stunned by the Cops who held the upper hand. 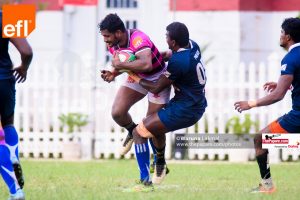 As the second half got underway, things weren’t looking good for the boys in pink. Police were on a roll! 43 minutes into the game Shanaka Harishchandra scored the Cops’ third try after breaking from the back of a scrum and ending up over the whitewash. But unfortunately, that was it for the gritty Policemen – they either took it easy or the visitors got better, but a downward spiral in their performance somehow began.  5 minutes later, Umesh Madhushan scored a try that opened the gateway to an unforgettable comeback by the visitors. (PSC 19 – 7 HSC)

Right from the restart, three tries came in quick succession and Havelocks displayed a sense of urgency and positivity which resulted in a win. Umesh Madushan managed to score his second try in the 53rd minute, whilst prop forward Rahal Delpachitra also got his name in the score card, after touching down twice which eventually put Havelocks in the lead. But showing their fighting spirit, Police scored through Nisal Samadhi who leveled the scores in the 63rd minute. The winning moment came 6 minutes before full time, when lasindu Karunathilake went over the whitewash, saving his side from the jaws of defeat.

WHAT WENT WRONG FOR POLICE?

The cops failed to recognize the space in the back of the Havelock defense lines, they missed out on a lot since they failed to make the kicks at the right time. Another main reason for their defeat is the fact that they forgot the basics! Although they played a fast game of rugby with the wet ball early on, many balls were dropped throughout the game, and possession was easily given away. Had they held on to the 50/50 offloads that they opted to throw, it’s a possibility that two Havelock tries COULD have been prevented. In the second half their defense was way below par – especially the way they absorbed the pressure. Looking back at when Havelocks scored their first three tries within 6 minutes, one common error the Cops made was NO PROPER DEFENCE LINE! The usual 1-2-3 lines of defense were not to be seen, after doing so well in the first half, what happened in the second!?

WHAT WENT RIGHT FOR HAVELOCKS?

Although the spirited Park Club boys looked clumsy throughout the first half of the game, by not showing any sense of urgency or effort to win turn overs, counter rucks or even attack like they usually do; they gradually made amends to their mistakes and played according to a structure in the 2nd half. Their first try for an instance, after managing to force Police to make an error, Havies found good touch, won the lineout, set up a rolling maul, drove forward, used the forwards and scored the try. They repeated the same routine throughout the second half and the forwards ended up scoring all 5 tries.