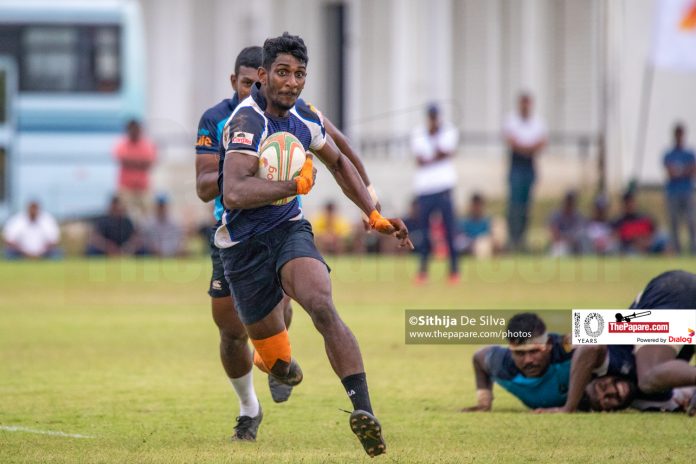 Police Sports Club continued their winning momentum in the new year as a superlative second-half performance was good enough to defeat the Air Force sports club. The play ended at 36 points to 15 in the Dialog Rugby League clash worked off at Ratmalana.

Police started the game brilliantly as the forwards dominated proceeding at the breakdowns and scrums while the Big Fijian Emosi Vunivosa crashed over for the opening try for the police team while Nalin Kumara slotted over the conversion. (AIR FORCE 00 – 07 POLICE)

Police Lost their big front-rower Lahiru Pavithra, who was sent to the bin for a dangerous tackle, however, the airmen struggled to get any advantage as they lost four possessions in a row as Police managed to hold off the airmen during the sin bin time. Airmen looked threatening in the last few phases of the first half but they couldn’t convert it to points as Police took a slim lead to the half time break.

Stern half time talk made the difference for the hosts as they came out hitting the ground running as their lineout functioned well as the rolling maul, big lock Shashika Fernando ran through a gap from the back of the maul as he was able to dot the ball down for the Airmen. (AIR FORCE 05 – 07 POLICE)

Read: Foreign referees will continue to officiate in DRL!

Police replied straight away as their forwards played a few phrases in the close quarters as center Emosi Vunivosa ‘s pass found open space for the backs as Udara Suriyapperuma run around Air Force sweeper to dived over the second try for the Police.  (AIR FORCE 05 – 12 POLICE)

Police overpowered Air Force in the breakdown as the playmaker Emosi Vunivosa’s pass opened up plenty of room to run through for Sachith Silva who dived over in the corner to increase the lead. Nalin Kumara curled the conversion over from the touchline to make it a perfect seven for the team. (AIR FORCE 05 – 19 POLICE)

Police turned the game to a fast one in the second half as Vageesha Weerasinghe exposed the Air Force midfield defense by stepping past two defenders and the backs linking up with Nalin Kumara and Emosi Vunivosa, which sent the winger Sachith Silva opened as he cantered away to score his second and Bonus Point try for police as Nalin Kumara made no mistake from the touchline conversion. (AIR FORCE 05 – 26 POLICE)

After scoring the bonus point try it was all about game management for Police as they kept Airmen at a distance while Nalin Kumara punished the Airmen from the tee as he slotted in an easy three-pointer.

Police lost their replacement forward Hashan Fernando as their discipline continued on the downward trend. The Air Force immediately took advantage of their numerical superiority when Shashika Fernando powered over from the tail of the maul.

As the game drew to a close Vihanga Pivithuru found a huge gap in the Air Force Defense as he cantered away to score, Nalin kumara pierced the posts from right in front and in the final play of the game Faris Ali touched down. The home side suffered another defeat with zero wins’ to call their own in the Dialog Rugby League.