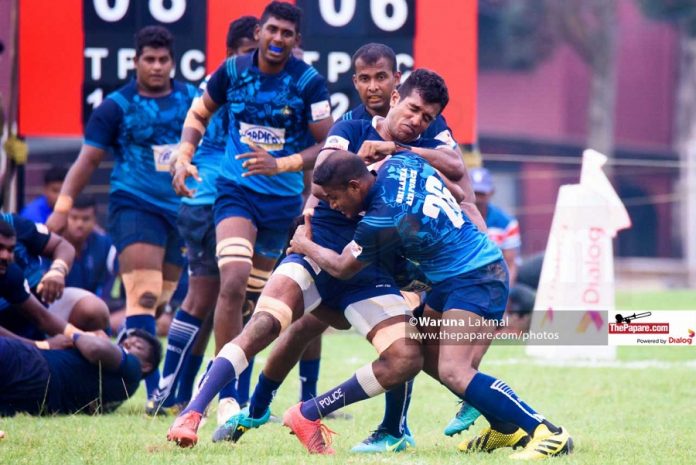 Police Sports Club dominated rivals Air Force in the first half but failed to score a single point in the second half, eventually ending as 29-12 winners in the Dialog Rugby League game played at Police Park.

Air Force made ten changes for the second game running as injury woes continued for the team at the foot of the table. Meanwhile, the hosts made two changes as Udaya Sanjula and Kasun Rajakaruna entered the run on XV, as Udara Sooriyapperuma and Sachith Silva were rested.

The home team got off to a great start as Nisal Samadhi scored just three minutes into the game and the visitors were caught out early on. Yohan Peiris failed with the conversion moments after the flank-forward found his way to the try line, leaving the defenders in the dust. (PSC 05-00 AF)

The visitors were unable to find their footing in the early exchanges, paving the way for Police to double their try tally through Kasun Rajakaruna, justifying his selection in style.

The winger stepped aside on rushing defender to touch down in the corner as Air Force failed to live up to the tempo of the host. Peiris converted the tougher kick from the sideline, raising the voices of the home faithful. (PSC 12-00 AF)

Police opted to retain the fast pace as the visitors were no match. This put the hosts in firm control and it took them just 15 minutes to score their third for the evening.

Both finishes got their name on the scoresheet. This time, former Josephian Shan Akila made headway before scoring, as the visitors fell further behind on the score board.

Yohan Peiris made no mistake and five-eighth Peiris slotted from in front moments later, as the home team’s lead crept in to the 20’s at the twenty-minute mark. (PSC 22-00 AF)

The visitor’s woes went from bad to worse as Lahiru Udayanga saw yellow for a high shot. This spurred on the hosts further as the bonus point try was up for grabs.

Udaya Sanjula was the beneficiary as the hosts secured the try-scoring bonus on the half hour mark of the game, putting a massive cushion between the two teams.

The lanky lock-forward was at hand to crash over as the forwards were too strong for their opponents. Yohan Peiris added the extras from close range, leaving Air Force searching for answers. (PSC 29-00 AF)

Hooker Udayanga returned to the field; however, Air Force finished the first-half with 14 men as Imesh Aponso had to sit out the final exchanges.

A half-time telling off by the coach added some fight in to the final-placed team as Air Force finally showed up after the break.

This caught out the home team, with prop forward Hashan Fernando having to pay the prize for the indiscipline that started to creep into the host game.

The cops’ defence, however, held firm till two minutes past the hour mark. It was a field day for lock forwards this time, as Thimira Amanda was the man to find the crack in the hosts’ defence to dot down for the visitors. Gayantha Iddamalgoda failed with the extras. (PSC 29-05 AF)

Adeesha Hadunpathirana was the next to find himself seated in the bin, as Police looked to hang in there.

Fellow second-rower Shashika Fernando was the next to get his name on the scoresheet as the visitors fought for pride in the dying embers of the game. The giant Fernando crashed over from the back of a maul, taking the scores to the doubt figures.

Iddamalgoda rushed his conversion through the uprights adding some respectability to the score line even though the result of the game was put to bed. (PSC 29-12 AF)

The hosts were held scoreless in the second half. However, some sloppy hands let the visitors down as the game was brought to an end.

Dialog Viu Player of the match: Primesh Danushka (Police Half Back)