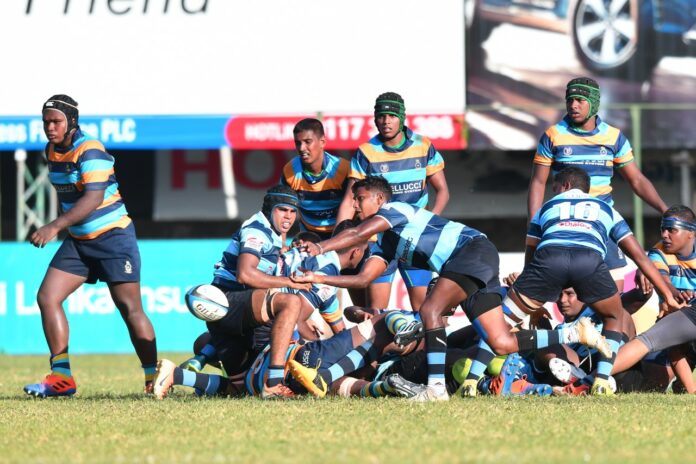 Wesley College sent out a warning to the rest of the teams that they are strong contenders for this year’s league title with a resounding 38 points (6T, 4C) to 07 (1T, 1C) win over Vidyartha College, in their Dialog Schools Rugby League opener, worked off at Longdon Place today.

Kicking off the proceedings, Wesley wasted no time going about their task, attacking through their backs and forwards. Scrum half Rigesh Muralidaran side stepped his way through under the posts in the 4th minute, taking a quick tap off a 5-meter penalty. Fly half Shaveen Jayawardane added the easy extras. A failed kicked to touch by Vidyartha’s Deshan Balasooriya saw the hosts capitalizing with the mistake, making inroads into the opposition half through their forwards, before the ball being sent out wide to their winger Mishael Amat to do the honors.  Jayawardane made a splendid conversion from the corner flag to extend the lead. (WC 14 – 00 VCK)

Prop Hazeez Thabeeth managed to score back-to-back tries in the 23rd and 29th minute, helping himself with running a good supporting line in attack. Jayawardane was on target with the conversions and Wesley went into the break with the all-important bonus point already secured.

The second half began in total contrast to the first half, with both teams making basic errors and no real momentum for either side. Instead, Wesley’s number 07 Chamod Nimsara was sent to the sin-bin due to repeated infringements. Just 8 minutes later, he was joined by Vidyartha’s prop forward Chirantha Dissanayake, who was shown yellow for a high tackle. It only got worse for the visitors as a couple of minutes later, their fly half Deshan Balasooriya joined Chirantha after being shown yellow for not tracking back 10 meters off a penalty conceded. Wesley wasted no time in using the numerical advantage, spreading the ball out wide that saw substitute Sheal Samuel touching down besides the corner flag. However, Jayawardane was unsuccessful this time the difficult conversion. (WC 33 – 00 VCK)

Vidyartha did give their travelling supporters some consolation when their Skipper Arosh Rathnayake scampered through the left flank to get over the whitewash. Fullback Menuka Thilakarathne added the extras.  (WC 33 – 07 VCK). However, any sense of slight optimism was quickly extinguished as 5 minutes later the hosts scored an unconverted try through their replacement winger Nithila Rodrigo, which was also his first touch of the ball. Wesley ended the game with 14 players when Wahid Hossen was shown yellow for an infringement at the breakdown. That didn’t have any impact on the final outcome as Wesley held their own to come out easy winners.