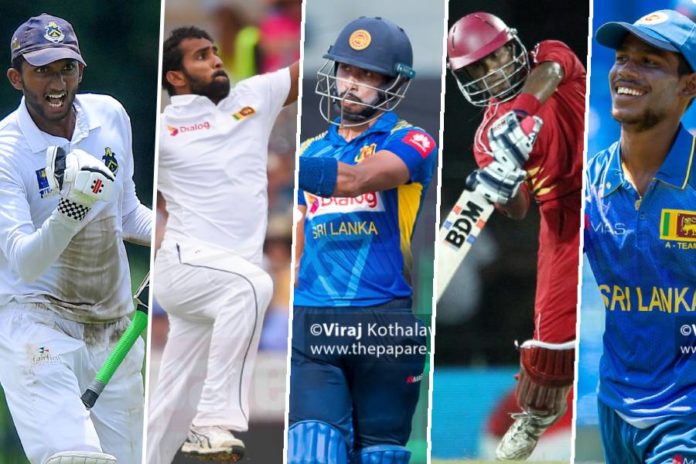 The much-awaited player draft of the inaugural Lankan Premier League happened virtually this Monday (19) with a total of 93 foreign and local players being picked up by the 5 franchises.

Though the draft is done and the tournament is scheduled to kick start on the 21st of November, there are still 7 vacant slots in 4 franchises to be filled, all by foreign players – which means there are no more places available for any local talent.

According to the tournament rules, a franchise is allowed to have 14 local players and 6 foreign players, and cannot exceed 20 players in their squads. This limits the maximum number of local players allowed to be part of the league to 70. Out of the picked 70, 42 are capped players and nearly 20 other capped players who are still active in the domestic circuit missed out. Although 28 uncapped players were picked, only 8 of them are guaranteed a place in the squad as the remaining 20 have been picked as supplementary players, players who will be with the squads in the bubble and will only be required when a player in the main squad gets injured. More uncapped players, who have been part of Sri Lanka development squads and have been performing quite well in domestic tournaments have not been picked up.

Let’s have a look at the players who we reckon are a little unlucky to miss out.

The two biggest players to have not secured a place in any of the 5 franchises are Sri Lanka’s current Test and ODI skipper Dimuth Karunaratne (32) and experienced top-order batsman Lahiru Thirimanne (31). While Karunaratne has not played any T20 cricket for Sri Lanka, Thirimanne has played 26 T20Is and was also a part of the Sri Lanka squad which took part in the last 3 ICC T20 World Cups.

Sadeera Samarawickrama (25) is the next big name to miss out. Samarawickrama, one of Sri Lanka’s most talented and promising young wicket-keeper batsmen who has represented Sri Lanka in all 3 formats, not being able to play a local league alongside foreign players is a big loss for the talent pool of the national team and a missed opportunity for the player.

Young all-rounder Chamika Karunaratne (24), who debuted for Sri Lanka in a Test against Australia in Canberra last year has also been left out. A hard-hitting lower-order batsman and a fighting fast bowler with good pace, Karunaratne has been part of Sri Lankan development squads for a number of tours.

Wicket-keeper batsman Sandun Weerakkody (27), who has played 3 ODIs for Sri Lanka, is another promising talent to be left out of the inaugural Lankan Premier League. He has been in tremendous form for his club in the recent domestic tournaments and also broke the Sri Lankan record for the fastest List A century smashing a 39-ball ton against a formidable BRC bowling attack last December.

The highest run-scorer of SLPL 2012, Sri Lanka’s first and only franchise-based T20 tournament held so far, Dilshan Munaweera (31) has failed to find himself a place in any of the 5 franchises this time. Along with him, the highest wicket-taker of the last Domestic T20 tournament, Malinda Pushpakumara (33) has also been left out.

Left-arm bowlers Vishwa Fernando (29) and Prabath Jayasuriya (28) have also failed to make the cut. Fernando has become a regular inclusion in Sri Lanka’s Test squad and has also been in and out of Sri Lanka’s limited-over squads. Spinner Jayasuriya, has only represented Sri Lanka in 2 ODIs so far but finished the last domestic T20 tournament as the 5th highest wicket-taker.

The list of uncapped players to be left out of the Lankan Premier League starts with two promising all-rounders, Jehan Daniel (21) and Santhush Gunatilake (21). Gunatilake was named in the 23-man pool from which the final squad for the tests against Bangladesh was supposed to be picked before the postponement of the series. Both Daniel and Gunatilake are talented fast-bowling all-rounders from Colts CC to miss out on an opportunity to rub shoulders with international stars.

Read – Time for Sri Lanka to introduce a fast-bowling all-rounder in Tests!

Top-order batsmen, Hasitha Boyagoda (21), Lasith Croospulle (22) and Pathum Nissanka (22) are three exciting young players who are also unlucky to have not been picked up. Middle-order batsman Sammu Ashan (22) can be considered another young talent to be left out. All these players have been part of Sri Lankan development squads regularly and are surprising omissions from LPL.

Mystery spinner Kevin Koththigoda (22) who was given the opportunity to play the Abu Dhabi T10 League last year surprisingly missed out as well alongside Nishan Peiris.

Moors SC’s Shiran Fernando (27), one of the most improved fast bowlers in the domestic circuit has also missed the cut. Fernando can help his team with some quick runs down the order and would have been a handy pick for any team in the league.

Apart from the above mentioned capped and uncapped players, who we think deserved to be in the mix, the following are a few notable players who have not been considered.