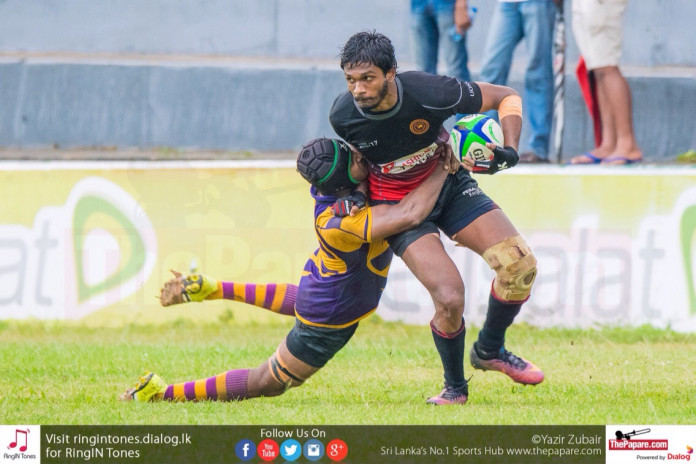 The semi-finals of the inter university tournament commenced yesterday with Moratuwa taking on Sri Jayewardenepura University and Peradeniya taking on the Colombo University.

Peradeniya and Moratuwa won their semi-finals pretty convincingly to book a spot in the final next weekend whilst the losers Colombo and Jayewardenepura will face off for the 3rd spot.

The first match was between the hosts Pera and the Colombo universities. Peradeniya made it look easy with a scorline of 52 points to 28 points. At half time it was 35 points to 14 points in favor of Pera. Pera made early inroads into the game by drawing first blood through their first center S.Weerakoon. Isuru Herath added the extras from under the posts. Minutes later the Colombo prop forward K.Harshanath droppedon the line after the forwards succeeded their grind through the defense. Then it was all Pera from then onwards in the first half of the game.  S.Weerakoon got his second while another 3 tries were scored by Arosha Jayathilake twice and H.Ekanayake. All these were under the posts which Isuru Herath converted with ease giving them a 35 to 07 point lead on the brink of half time. However just before the break Colombo pulled back another 7 points through their forward D.Wickramasinghe after smashing the opposition defense. K.Jayaweera added the extras.

H.Ekanayake got his second soon after the break after the backline combined easily with some quick passes. Isuru Herath had no problems in converting this as well. Then the Colombo forwards which were the heavier of the two teams got into the act as the rains came down at the Nittawela rugby stadium. D.Wickramasinghe and D.Maduwantha scored two tries in quick succession to make things interesting. However Pera pulled it beyond 2 fully converted scores when Asiri Abeysekara pinched a penalty. The game was sealed with the S.Weerakoon try which also earned him the hat-trick making him the highest try scorer of the tournament so far.

Moratuwa took on Japura in the second semi-final amidst the rain before the start of play. It was one way traffic from the kick off as Moratuwa made easy line breaks and were the far more superior side of the two.  However, Japura didn’t give up that easily and remained constantly in the game.  The game ended 40 points to 05 in favor of Moratuwa and the led 14 points to nil at half time. The two tries in the first half were courtesy of the some good linking in the backline. S.Liyanage got a long cut out pass from his fly half which left an open field for him to run to the try and curve back under the posts. S.Katugampola made the hard yards and scored for Moratuwa which too was converted by P.Madhusanka.

In the second half Moratuwa came up with 4 more tries to the sole try by Japura. A.Weerakoon and C.Paliyadaru scored soon after the restart to make it 26 points to nil. These were all set piece moves as the players split opened the gaps and sneaked in through the Japura defense. This was helped by the handling of Japura as well. S.Anthony and A.Ekanayake scored the last two tries as they extended their lead to 40 nil. The consolation try for Japura came through D.Herath who took a quick tap and barged his way over the line. The resulting conversion failed which meant that the final score stood at 40 points to 05 in favor of the Mora team.

Champion coach to take charge of Sri Lanka U20 7s

Expert panel spearheaded by Marija to oversee U20 operation