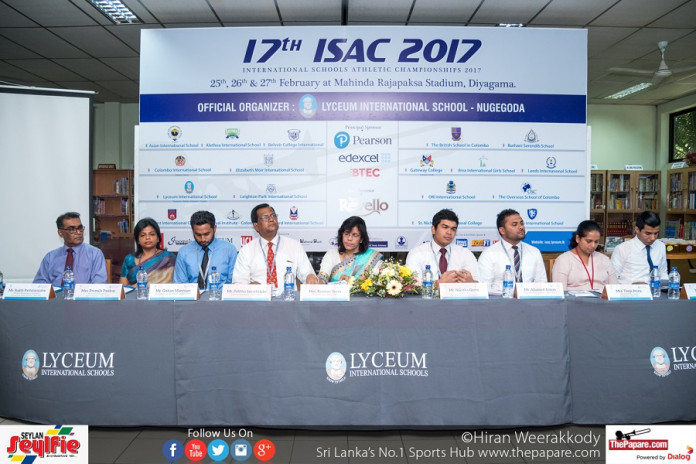 A media conference was held at Lyceum International, Nugegoda to brief the media about the 17th International Schools Athletic Championship (ISAC) and handing over of the sponsorships by the sponsors.  This year ISAC will be powered by Pearson Education PLC as the main sponsor, Rovello chocolates of Ceylon Biscuits as the Co-sponsor and Mcdonalds Sri Lanka partnering as a special sponsor.

Addressing the gathering Mrs.Premila Paulraj , Assistant Vice President of Pearson Education PLC asserted that although they are an organization involved in examinations they recognized that there are some students who are talented in the field of sports and deserve a chance to improve their talents and continue their career in sport. Hence The Pearson group is delighted to be able to be the main sponsor of the ISAC  for the 6th time.

Speaking next Mrs. Theja Peiris , Group General Manager (Marketing) of Ceylon biscuits Limited who’s brand Rovello will be the co-sponsor of the 17th ISAC added that they are proud about the longstanding partnership of 11 years with the ISAC and were delighted at the amount of passion and talent shown by the participants of the meet year after year . She also added that it is important that the international schools are supported in the sporting field as they now bare a considerable responsibility in educating the next generation of the country.

The sponsors then handed over the sponsorship cheques to Mrs. Kumari Grero , Chairperson ISAC 2017 and Coordinating Principal of Lyceum International Schools. 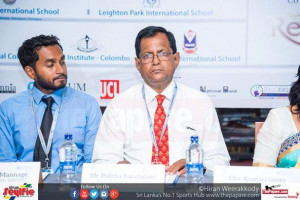 Answering a question raised by ThePapare.com as to whether electronic timing will be available at the meet since the past few meets including the nationals was held without the facility, Mr Palitha Jayathilak. Director Genera of ISAC 2017 confirmed that the facility will be available at the meet as he had received the assurance from sports minister Dayasiri Jayasekara that necessary arrangements will be made to provide the required technology for the meet. If the electronic timing is available for the meet it will be good news for all the athletes in the country as it has been a big set back for the competitions held lately.

The ISAC is conducted in accordance with the competition rules and regulations of both TISSL as well as the International Association of Athletic Federations (IAAF) and will include electronic timing and measurements. The competition will also be conducted by over 300 officials as per the rules of the Amateur Athletic Association of Sri Lanka. Each competitor will also be given a unique Identity Card by TISSL for easy identification.

Lyceum International College, Nugegoda will be responsible for organizing this year’s event having taken over the reins from Gateway College in 2016. The hosting of ISAC is alternated between Gateway College and Lyceum College with each school in charge of the tournament for 3 years.

Approximately 3000 athletes from 24 International Schools will compete in 130 events for both boys and girls. Over 20,000 spectators including students, parents, relatives, staff members and cheering squads from TISSL member schools are expected to add color to the event.