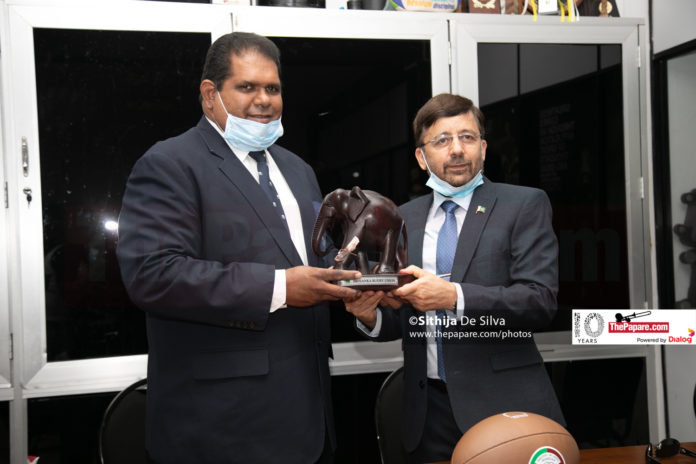 Deputy High Commissioner Mr. Tanvir Ahmed, Trade & Investment Attaché Ms. Assmma Kamal, Press Attaché Mr.  Inthisar Ahmed and Second Secretary Ms.  Ayesha Abu Bakr Fahad were present at the occasion as well. Addressing the delegates, SLR President, Mr. Gunarathna, highlighted the fact that the two countries have had a strong connection over the years, and he also showed his gratitude towards the distinguished guests by presenting them a Sri Lanka Tuskers memento. He stated that “Sri Lanka has the likes of World Rugby recognized set of expert trainers and Rugby Educators” and that SLR would be glad to “Send a few trainers and educators to help Develop Rugby in Pakistan”.

Before concluding his speech, Mr. Gunarathna requested that the High Commission consider adding Sevens Rugby as a sporting event at the next South Asian Games, which is to be held in Pakistan.

Following Mr. Gunarathna’s speech, the Pakistani High Commissioner, H. E. Maj. General Muhammad Saad Khattak, shared his thoughts about Sri Lanka and Sri Lankan sports, using his own experiences as an example. According to him, this donation is “just a gesture of goodwill towards Sri Lanka” and a way forward towards bettering the relationship between the two countries. He also stated that “Sri Lankan kids have sports in their genes” and that this gesture is a duty from one country to another.

Addressing the request of Mr. Gunarathna, the Pakistani High Commissioner went on to state that “The High Commission will play its role and try to fulfill the request” of including Sevens at the South Asian Games. And as he ended his speech, he added that he is “very keen to come again and again to the country, especially to see how it has developed through sports”.

The event ended in fellowship as both parties exchanged tokens of appreciation.

Stay logged to ThePapare.com for more updates and news.