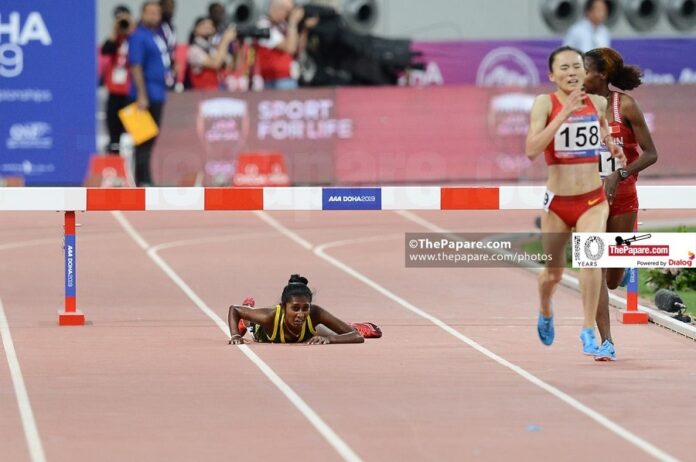 Rathnayake’s spot at Tokyo 2020 seemed to be secure on the last day of qualification (29th June) as the athlete sat in 42nd position of the Olympic Qualification list, with 45 athletes set to make it through.

However, her performance at the Indian Inter-state Athletic Championships, where she finished with a timing of 10:12.02 mins, did not prove to be enough for her maintain her place among the top 45 in the event.

Like Rathnayake, many other athletes across the World put in a last-ditch effort to qualify for the event on the last day of qualification. Steeple chasers such as Canadian Champion Regan Yee managed to qualify via meeting the entry standard of 9:30.00 mins on 29th June, thus pushing the likes of Rathnayake further down the qualification list.

Ultimately, the Sri Lankan champion finished in 46th position on the qualification list, losing out on the Olympics by the barest of margins.

One should note that despite being the top-ranked Sri Lankan female athlete, Rathnayake faced a huge challenge in meeting entry requirements with events being canceled in Sri Lanka due the pandemic.

Furthermore, as reported by Reemus Fernando of The Island, negligence by the authorities saw Rathnayake compete at the National Trials in April 2021, where the steeplechase barriers had been mistakenly elevated a few centimeters higher than the 76.2cm height stipulated by World Athletics, forcing athletes to put in extra effort to clear them.

Rathnayake finished with a timing of 9:57.81 mins at the event but could have pushed for a timing below 9:50.00 (which was her goal coming into the competition), if the correct standards had been met by the authorities.

With World Rankings playing a role in Olympic Qualification for Tokyo 2020, every second at every event counts for the athletes and one can only imagine what Nilani Rathnayake could have achieved if the system was a source of support to her, instead of yet another barrier.